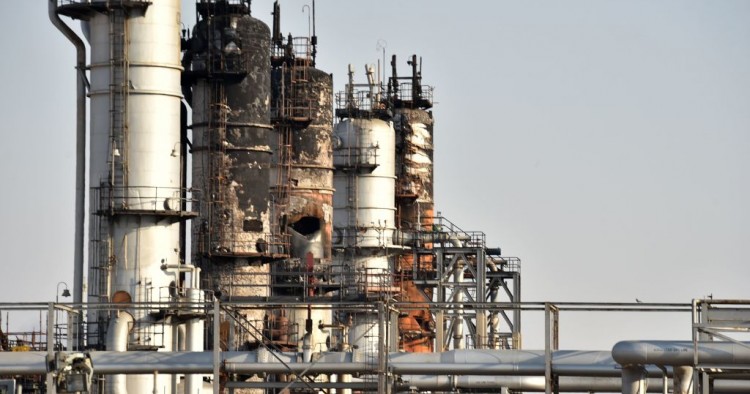 On Sept. 14, the news that Saudi Arabia’s oil facilities had been attacked and damaged came as a shock. While there had been a gradual escalation in Iranian-led hostilities following the U.S. dismantling of the Joint Comprehensive Plan of Action (aka the Iran nuclear deal), the general expectation was that this standoff would still be contested in proxy theaters or on the periphery of the Gulf oil industry.

From this perspective, the attack was a major success. First, it maximized the element of surprise, both for policymakers as well as for financial markets. Second, it exposed Saudi defense vulnerabilities by showcasing a highly efficient use of asymmetric warfare capabilities. And third, it helped fuel speculation around the various launching positions Iran may have used in this maneuver, carefully maintaining plausible deniability regarding the Iranian regime’s culpability. It has certainly succeeded in alerting Gulf and Western policymakers to the risks of further confrontation and forced a pause in current Iran policy.

And yet, in the not too distant future, this attack will likely be regarded as a tactical mistake. Tehran has miscalculated the timing of such a spectacular attack and it’s unclear whether Iran will get another opportunity to strike such a surprise blow again. The IMF forecasts Iran’s GDP to shrink by 6% in 2019 with inflation hovering at around 40%. There can be no illusion that the economic hardship in Iran is making the status quo untenable, with increased pressure on Tehran to figure out a way to alleviate the sanctions currently in place. The point here is that time is not on Iran’s side. Regardless of whether it chooses a more confrontational or conciliatory foreign policy, there is an urgency to find sanctions relief.

Hence, hitting the heart of Saudi’s oil industry in Abqaiq needs to deliver the maximum return. Such an attack must not only fulfill the conditions listed above, but needs to strongly impact financial markets as well as reset the relative balance of threats between Iran and the U.S./Saudi belligerents.

In this regard, the attack fell short. Oil prices registered their second-largest intra-day rise in history, just behind Saddam Hussein’s invasion of Kuwait in 1990, but it was not a durable increase. On the second day of trading, oil prices gave up half of that jump and have settled at that level (approx. $60-65 / bbl Brent) since. In absolute terms, this is barely a blip as prices are around their average of the past 12 months as well as near their five-year average. Moreover, given how oil shocks have precipitated global downturns in the past, it is astonishing that equity markets basically shrugged off the news. Oil demand is simply too fragile right now, so supply disruptions are likely to have less impact. To a degree, this exposes the Iranian threat as currently being weaker than Tehran had assumed.

Admittedly, part of the relaxed market reaction is due to the failure to cause a lasting disruption. Yet, how many chances will Iran get to hit Abqaiq or a similar facility without triggering a painful retaliation? Probably none more. Therefore, the Saudis and their allies will get an invaluable lesson in how to prepare for the next attack. First, they are likely to identify several vulnerabilities in the level of protection of strategic sites and should be able to upgrade their defensive capabilities. Second, they will focus on improving their intelligence as well as their monitoring systems in order to prevent such a surprise raid again. Third, this will also promote a policy push into understanding and curtailing Iran’s ability to use third countries.

The exact policy response is unclear and may very well be a mix of dovish and hawkish moves by Saudi Arabia and the U.S. Regardless, Iran is forced to give it time to allow for the new policy settings to emerge, meaning it would be foolhardy to launch another provocation in the near future. In the meantime, as this dynamic unfolds, there will be no effective sanctions relief anytime soon and thus no alleviation of pressure on the regime in Tehran.

Iran cannot strike Saudi Arabia at will and only has select opportunities to land a blow. It therefore needs to make sure that any major action has a lasting effect in shifting the landscape in its favor. Disrupting Saudi oil production is at the far end of Iran’s policy options, so everything needs to be aligned to ensure maximum success. In this instance, the timing was not, and Iran will come to regret having launched this attack prematurely.

Elliot Hentov is a Non-resident Scholar at the Middle East Institute. The views expressed in this article are his own.