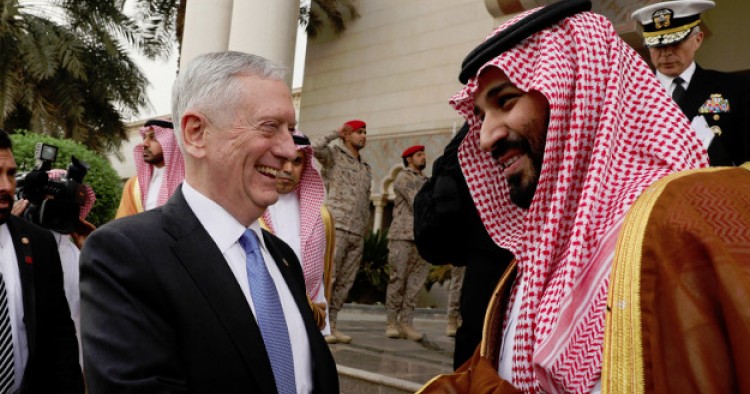 U.S. Secretary of Defense James Mattis’ latest remarks about the need for regime change in Iran have triggered angry reactions in Tehran. The Iranian defense minister described the Mattis' comments as "interventionist" and claimed they violated all principles of international law. “Instead of thinking about other nations, America’s defense minister and ruling establishment had better focus on resolving domestic issues and assessing their root causes which most likely will not only lead to the collapse of the current American administration in the near future, but has also created serious and numerous challenges to the political system in that country,” Hossein Dehghan was quoted as saying by state-run Islamic Republic News Agency. “Arrogant behavior, lack of attention to the power of nations, and ignorance about historical events and consequences of such statements have deprived such people of common sense. These remarks are similar to delirious talk by an ill person with fever,” he lamented.

Comment: In a rare interview with a high school student conducted by phone, the U.S. defense secretary recently said regime change in Iran will be necessary before Washington and Tehran could significantly improve their relations. “Until the Iranian people can get rid of this theocracy, these guys who think they can tell the people even which candidates they get a choice of. It’s going to be very, very difficult,” Mattis said in the interview. He added that Iran poses the biggest threat to the region and U.S. national security. He further noted that the Iranian people are not the problem, but maintained that  “it’s the regime that sends agents around to murder ambassadors in Pakistan or in Washington D.C. It’s the regime that provides missiles to Lebanese Hezbollah or the Houthi in Yemen.”

It is not the first time that a senior Trump administration official stresses the need for regime change in Iran. Last month, U.S. Secretary Rex Tillerson’s said at a Congressional hearing that “our policy towards Iran is to push back on this hegemony, contain their ability to develop, obviously, nuclear weapons and work towards support of those elements inside of Iran that would lead to a peaceful transition of that government. Those elements are there, certainly as we know.”

The top American diplomat’s remarks about a peaceful transition of power were interpreted inside Iran as Washington’s new policy of regime change in the Islamic Republic. Iranian Foreign Minister Javad Zarif took to Twitter to denounce his American counterpart’s comments. “Before reverting to unlawful & delusional regime-change policy towards #Iran, US Administration should study and learn from history,” Zarif tweeted. He added that the “debacle” of the 1953 CIA-backed coup against Iran’s democratically elected Prime Minister Mohmmad Mosaddegh and the success of the 1979 Islamic Revolution showed that “Iranian people are impervious to outside attempts to decide their destiny.” He continued: “For their own sake, US officials should worry more about saving their own regime than changing Iran’s, where 75% of people just voted.”

The war of words between U.S. and Iranian officials is the latest indication of worsening relations between Tehran and Washington. Although President Trump has so far disregarded his campaign promise and has not walked away from the Iran nuclear deal, his administration has made it clear that it will pursue a tougher policy vis-à-vis the Islamic Republic than the Obama administration. Recently, Washington has imposed new sanctions on Iran and has also taken steps to work with its traditional Middle Eastern allies to contain Iran’s regional ambitions. Latest developments - such as the rising tension between the U.S. military and Iranian-led forces in Syria and economic sanctions against the Islamic Revolution Guards Corps (I.R.G.C.) passed by the U.S. Senate today - all point to the fact that Washington and Tehran are moving toward more confrontation rather than cooperation in the near future.