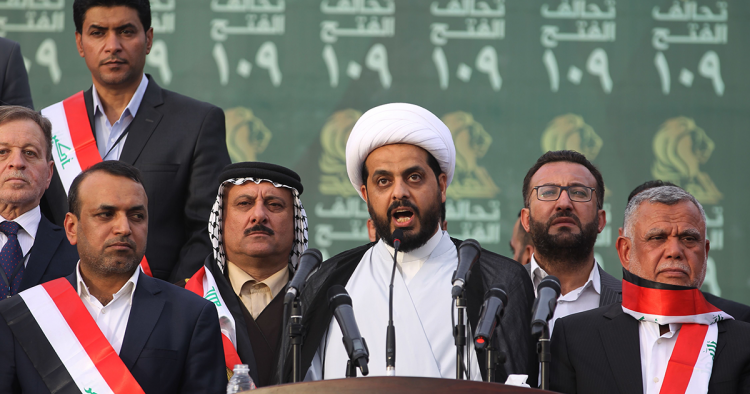 “I sent a clear and frank message to Mr. Esmail Qaani [commander of Islamic Revolutionary Guard Corps-Quds Force] ... the matter is related to us, regardless of other calculations … from now on … please no one talks to us and we won’t listen.” Qais al-Khazali, leader of Asa'ib Ahl al-Haq (AAH), had never talked about Qassem Soleimani, Qaani’s predecessor, in this way — not on national TV. But Soleimani is gone now and things have changed in Iraq, at least to an extent.

In his Nov. 19, 2020 interview, Khazali was speaking about the Quds Force’s attempts to persuade some Iraqi militias to stop provoking then-President Donald Trump to avoid any reaction from the United States. At the time the Islamic Republic’s policy was to de-escalate tensions with the United States and wait for the new administration to start negotiating on the Joint Comprehensive Plan of Action (JCPOA) and sanctions.

Khazali seemed adamant that the decision to attack U.S. forces and interests in Iraq is made by Iraqi militias “regardless of other calculations” — i.e., regardless of Iran’s policy to temporarily reduce tensions with the United States at the time. He followed through on his plans and his group continued firing rockets at the U.S. embassy in Baghdad, including the Dec. 20, 2020 rocket attack described by U.S. Central Command as the “largest in a decade.” The attack prompted Qaani to travel to Iraq the next day to calm AAH down. He was successful in preventing Iraqi militias from carrying out serious attacks against the U.S. embassy in Baghdad to show that the Quds Force still has control over its proxies in Iraq.

Scrambling to fill a power vacuum

The death of Soleimani and Abu Mahdi al-Muhannis, the de facto commander of the Popular Mobilization Forces (PMF), created a vacuum that militia leaders are scrambling to fill. Abu Fadak al-Mohammedawi, Muhannis’s successor, has so far failed to fill the void, creating space for characters such as Khazali to try to take on a leading role among Iran-backed militias. This can explain why he chose to reveal the content of his message to Qaani live on air. In this environment groups such as AAH, Kata’ib Hezbollah (KH), and Harakat al-Nujaba (HN) both coordinate on matters like attacking U.S. interests and compete for prominence among the militias.

One way to achieve greater prominence is to take more radical stances and show willingness to engage in kinetic operations. It is no wonder then that Khazali expressed his satisfaction with a possible Turkish invasion of northern Iraq. In March, while smiling he told KH’s al-Etijah TV that a Turkish invasion “will be very good to consolidate the PMF position among the people … we want challenges.”

Historically, Iran has used Iraqi militias to implement both its short-term plans and long-term strategies. At this stage Iran seems to have included its Iraqi proxies in plans to lift U.S. sanctions. Going forward, the Islamic Republic may use escalation against the United States in Iraq to exercise leverage in its dealings with Washington on the JCPOA.

In his Iranian new year speech on March 21, Ayatollah Ali Khamenei, the Iranian supreme leader, emphasized that his country is in no rush to return to its JCPOA obligations. This seems to be the view of an influential current inside the Iranian regime, including in the Quds Force. They think that Tehran has survived the hardest part of its showdown with Washington. Iran’s crude oil exports are increasing, the country has signed a long-term deal with China worth a reported $400 billion to boost its economy and evade U.S. sanctions, and the regime seems to be gradually getting access to its frozen assets abroad.

Instead of rushing to the negotiation table and being forced to offer concessions, the Islamic Republic could use its proxies in Iraq, and elsewhere in the region, to escalate against U.S. interests and those of its allies to gain leverage in the talks. Initial signs of this trend can already be seen. In January, the Quds Force gave the green light to form an Iraqi façade group called Alwiyat al-Waad al-Haq (True Pledge Brigades) with a mission to attack Saudi Arabia from Iraqi territory. The group has sent drones over the Saudi capital, Riyadh, and reportedly struck the Royal Court at Yamama Palace. Even the uptick in Houthi attacks against Saudi Arabia can be read as part of this Iranian strategy, in addition to reasons related to developments in Yemen’s civil war.

Iraqi militias like AAH seem to be ready for such escalation, and their leaders are happy to face “challenges” that are judged to be beneficial for them. After all, they owe their influence and status to the long years of American occupation and the war against ISIS. In fact, some of the Iraqi militias are more willing to follow Iran’s orders when they ask for escalation rather than de-escalation. Khazali, who after Trump’s departure now seems to feel more confident and is giving speech among his followers, rather than talking to them from undisclosed locations, threatened U.S. troops on April 2: "We emphasize that the current operations will continue and increase in terms of quantity and quality if the U.S. doesn’t withdraw its forces from all Iraqi regions ... including north of Iraq [Kurdistan]."

The Islamic Republic sees this short-term plan as one step toward achieving a full withdrawal of U.S. forces from its western neighbor. U.S. forces left Iraq once in 2011, and there is no reason that they won’t do so again, Iran thinks. And the Iraqi militias are entirely in agreement with that sentiment. They believe unless the U.S. forces leave Iraq, they will not be able to achieve their ultimate goal, which is to capture the Iraqi state, just like Lebanese Hezbollah.

Hamdi Malik, PhD, is an Associate Fellow with the Washington Institute, specializing in Shi’a militias. Hamdi is the coauthor of the Institute's 2020 study Honored, Not Contained: The Future of Iraq’s Popular Mobilization Forces. He tweets at: @HamdiAMalik. The views expressed in this piece are his own.