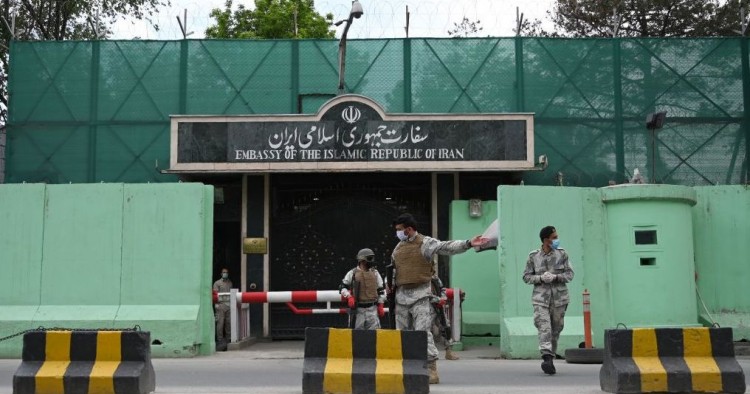 Despite strong religious and cultural ties and a long shared border, Iran has a somewhat complicated relationship with Afghanistan. Revolutionary Iran’s tumultuous birth coincided with the Soviet Union’s invasion of Afghanistan some four decades ago. Since then, Iran’s attempts to preserve its interests in conflict-ridden Afghanistan have not received much attention from the outside world, but it remains one of the most important neighboring countries for Tehran’s foreign policy.

Iran is an ambitious regional player with a clear understanding of its complex surroundings and a cautious plan to chart a path through them. The complicated nature of Iran’s relations with Afghanistan is in part a result of the fluctuating pattern of its interactions with the relevant stakeholders, which are meditated by the interplay of many identity or interest groups and intermediaries that have the potential for influencing social, political, and economic developments in what is a deeply contested society. More often than not, these groups and intermediaries have conflicting positions in Afghan society.

Another part of Iran’s complicated ties with Afghanistan can be attributed to its unremitting opposition to the United States, which is a strong partner of the Kabul regime. As a Shi’a-dominant country, Iran had a long history of ideological differences and political rivalry with the Afghan Taliban. During the ill-fated Taliban regime in the late 1990s, Iran supported the anti-Taliban Northern Alliance, a non-Pashtun coalition of other ethnic groups. Although Iran held back-channel diplomatic talks with the U.S. following the terrorist attacks of Sept. 11, 2001 on how to stabilize Afghanistan and eliminate al-Qaeda, several structural barriers prevented the informal talks from being institutionalized.

At present, an important dimension of Iran’s understanding of the Afghan crisis is related to how it perceives its relations with Washington. For a long time now, Tehran has been pursuing a risky policy of “hedging” in Afghanistan — simultaneously providing support to the Afghan government and the Taliban in the hopes of keeping them divided and influencing political developments once the U.S. draws down its forces. Due to this seemingly contradictory dual policy — one ambivalent and one conciliatory, one overt and one covert — it is difficult to analyze Iran’s intentions and influence in Afghanistan.

Tehran and the Taliban

There have been many reports of tactical understandings between Tehran and the Taliban. This stands in sharp contrast to the era of the Taliban regime, which received patronage from Saudi Arabia, Iran’s arch rival. However, in the post-9/11 world order, old attitudes changed as new geopolitical realities emerged. One such change was Saudi-Taliban ties, as it became hard for the Saudis to favor the Taliban at the cost of its traditional ally, the U.S. In recent years, Saudi Arabia’s harsh stance against Qatar, where the Taliban maintains its political office, and Qatar’s improved relations with Tehran have helped Iran and the Taliban become closer. This explains Iran’s ability and willingness to play different roles depending on the context and changing circumstances.

Afghanistan’s Shi’a Hazaras, who reside in the Koh-i-Baba Mountains on the western fringe of the Hindu Kush range in central Afghanistan, have deep socio-cultural bonds with Iran. During the years of the Afghan civil war, many Hazaras looked to Tehran as a counterweight to the Sunni Taliban. Iran also hosts millions of Hazara refugees who fled the miserable conditions in Afghanistan for a better life. There have been confirmed reports of Tehran dispatching young Hazaras to fight on behalf of the Assad regime in Syria as part of the Fatemiyoun Division, motivated by promises of money and permanent residency in Iran.

Despite being historically anti-Taliban, Tehran seems to have changed its tune on the understanding that the Taliban would no longer persecute Shi’a Hazaras. The Taliban has also reciprocated, and the reason seems tactical. Ahead of the intra-Afghan talks, the Taliban has pulled out all the stops to gain legitimacy among Afghan Hazaras. For instance, the Taliban’s newly appointed northern district governor, Mawlawi Mahdi Mujahid, is an ethnic Hazara Shi’a cleric. In a recent video message, Mujahid asked his co-religionists to fight against the “Jewish and Christian invaders.” He said, “Weren’t you holding our flags alongside the Sunni brothers in jihad against [the] Soviets? How can you forget that history? Why are you silent against these invaders led by the Americans?” Clearly, Mujahid’s utterances and political messaging are in tune with the Taliban’s anti-Western narrative.

It is also perhaps the first time the Taliban has accommodated a Shi’a leader in its group. In order to dispel the notion that the Taliban is predominantly Pashtun, and that the appointment of a Hazara militiaman is just a political gimmick, Taliban spokesperson Suhail Shaheen said “it is not that Taliban have included people from the other communities, instead they were with us [from] long ago,” arguing that commanders from the Tajik and Hazara community have played an important role in the Taliban’s operations.

The Taliban’s attempts to include Afghanistan’s ethnic minorities in the new coalition emerging in Kabul have been viewed favorably by Tehran. Since the beginning of peace talks with the United States, several top Taliban leaders have been to Tehran for consultations, and Iran has been trying to maintain good ties with almost all Afghan stakeholders. There are reports that Iran’s special representative on Afghanistan, Mohammad Ebrahim Taherian, has regularly interacted with the Taliban’s political leaders, as well as other Afghan political leaders, including Salahuddin Rabbani, the head of Afghanistan’s Jamiat-e Islami, and Abdul Rasul Sayyaf, the chief of the Islamic Dawah Organization of Afghanistan. It should also be noted that Abdullah Abdullah, in effect the number two in the Afghan government, has historical ties with Iran. Following the disputed presidential election last fall, when Abdullah challenged the outcome, Iran’s Ministry of Foreign Affairs stressed the need for the creation of an inclusive government, implying a tilt in favor of Abdullah. Deeming this statement to be a sign of interference, the Afghan government condemned Iran’s proposal. Abdullah, an ethnic Tajik, has toned down his anti-Taliban stance since the group’s rapprochement with Tehran.

After the elimination of Iran’s top general, Qassem Soleimani, head of the Islamic Revolutionary Guard Corps-Quds Force (IRGC-QF), in January, U.S. Secretary of State Mike Pompeo accused Iran of undermining the Afghan peace process by using militant groups in the country, and also asked the Taliban to disengage from Tehran. It is worth noting that Soleimani’s successor, Gen. Esmail Ghaani, who was his deputy for more than a decade, was previously responsible for Iran’s engagement with Afghanistan, focusing primarily on Shi’as in the Af-Pak region. According to media reports, Ghaani visited Bamiyan Province in 2018, apparently as the deputy Iranian ambassador to Kabul. It is too soon to tell for sure, but given his professional background, Ghaani’s command of the IRGC-QF could potentially see it step up its activities in Afghanistan and Pakistan.

Following the U.S.-Taliban peace deal in February, some disgruntled Taliban commanders and leaders linked to Iran are said to be trying to sabotage negotiation efforts aimed at ending the conflict. In particular, mention should be made of a new Taliban faction, Hezb-e Walayat-e Islami, currently based in Iran. Although the extent of this faction’s influence is unclear, it is among a number of Taliban offshoots with links to Tehran. There are also rumors that the Haqqani network, traditionally known for having strong ties to Pakistan, is getting closer to Iran as well.

As intra-Afghan negotiations are likely to begin soon, Tehran is preparing itself to play a crucial role. Since the U.S. has often confronted Iran’s ideological and geopolitical interests in the Afghan conflict, Iran is keen to maintain a favorable balance of power in post-American Afghanistan. Following the political agreement between President Ashraf Ghani and Abdullah, Iranian Foreign Minister Mohammed Javad Zarif immediately telephoned the two leaders to congratulate them for ending the political stalemate and expressed his country’s desire to help support the intra-Afghan dialogue.

According to UN estimates, the number of Afghan citizens registered in Iran is around one million, but the Iranian government believes the total is much higher — at around 2.5 million Afghan migrants, both legal and illegal. Estimates from the International Office of Migration suggest that more than 200,000 Afghans have returned from Iran since the beginning of 2020 due to fear of the coronavirus, which has hit Iran especially hard. The first confirmed case of COVID-19 in Afghanistan was someone who came from Iran, and as Tehran gradually reopens its economy, Afghans are keen to return for seasonal work. However, Iran faces allegations that Afghan refugees have been forced back across the border into Afghanistan. After several cases of alleged mistreatment of Afghan refugees by Iranian border security guards in the last few weeks, resulting in their tragic deaths, the Ghani government sent a high-level delegation, led by Foreign Minister Mohammad Hanif Atmar, to defuse the crisis on June 20. Tehran is also pushing to ensure that its efforts to expand its political, sectarian, and economic influence in Afghanistan are not adversely affected by unwanted publicity over the mistreatment of Afghan refugees.

Tehran has influence, but there are limits

Although geopolitical factors and cultural links have enabled Iran to exercise significant influence in Afghanistan in recent years, Tehran now faces greater constraints amid growing social and economic problems at home. Years of authoritarian rule have made Iran’s youth population restive, while its economy has deteriorated due to ongoing Western sanctions and low oil prices. Iran is unlikely to become an example for the Taliban on how to establish a theocratic state based on political Islam, but Tehran will likely continue to maintain its ties with the Taliban for tactical reasons.

Tehran has long viewed Washington’s military presence in Afghanistan as part of a plan to encircle Iran. This has given it common ground with the Taliban, which has waged war against U.S. forces in Afghanistan for decades now; the age-old dictum that “the enemy of my enemy is my friend” has created an opportunity for rapprochement between the two sides. Tehran and the Taliban also share a common animosity toward the rise of ISIS’s local affiliate in Afghanistan, Islamic State-Khorasan Province, further supporting cooperation between the two sides.Despite their temporary shared interests, however, it remains highly debatable whether Tehran’s covert and overt support for the Taliban will win it any real influence in Afghanistan in the long run, especially after the Taliban is integrated into Afghan governing structures. At the end of the day, the Tehran-Taliban alliance is essentially opportunistic and a marriage of convenience, and how long it will last when the two sides have better options is unclear.