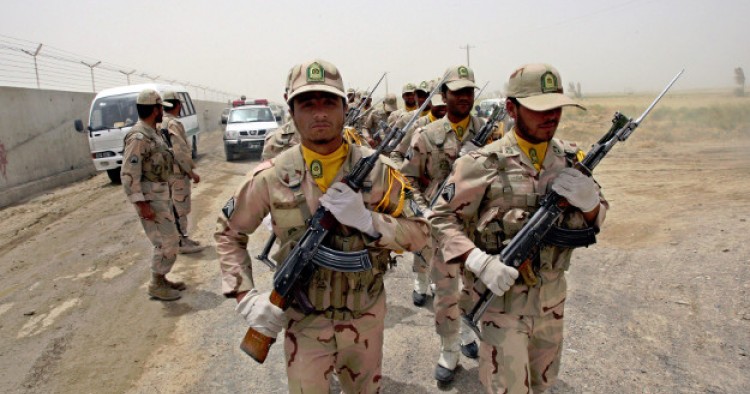 Iran’s Intelligence Ministry has said that the country’s security forces have disbanded nearly 100 terrorist groups across the country, Fars News Agency reported. “Highly serious measures have been taken in the Southern, Southeastern and Western parts of Iran and nearly 100 teams have been confronted," the deputy intelligence minister said on Monday. He noted that the Islamic State seeks to carry out attacks in Iran but assured the public that the security forces are able to deal with any threats.

Earlier this month, Iran’s Intelligence Minister Mahmoud Alavi also announced that his forces have disbanded more than 100 terrorist groups and confiscated large amount of explosives across the country in the past four years. Defending the track record of the Intelligence Ministry over the past four years at the Iranian Parliament, Alavi said the ministry “has dealt effective blows to 120 terrorist groups and killed many of their influential ringleaders.” President Hassan Rouhani has retained Seyed Mahmoud Alavi as the minister of intelligence in his new cabinet. He also revealed that the Intelligence Ministry has been put in charge of dealing with all security-related crimes in the cyberspace and stressed that his forces closely cooperate with other relevant authorities. According to Alavi, the Intelligence Ministry has killed several prominent terrorist leaders such as Abu Hasib Balouchi, Abu Ayesheh Kordi, and Abu Farsan. He further pointed out that Iranian security forces have discovered and neutralized three tons of explosives and thousands of weapons, suicide vests and other explosive material.

Comment: The remarks by top Iranian intelligence officials contradict Iranian leaders’ claim that the Islamic Republic is an “island of stability” in a troubled region. While Iran has not suffered the level of violence and terrorism seen in some of its neighbors, the latest spate of arrests and the June 7 Tehran attacks indicate that the Islamic State has infiltrated Iran and has managed to recruit among the country’s disenfranchised Sunni minority population.

Earlier this month, Alavi reported that the Iranian security forces had arrested 27 terrorists linked ith the Islamic State. A statement released by the ministry claimed that the terrorist group planned attacks in Iran’s strategic provinces and religious cities, and that Iranian intelligence agents also confiscated weapons and explosive material the militants were attempting to smuggle into Iran. The ministry pointed out that the counterterrorism operation was successful as a result of cooperation with the intelligence agency of a regional country, but it did not reveal the name of the country or the location of the operation. “In this regard, 10 individuals were detained in this group’s training base on the other side of the borders, while 17 others were arrested inside the country,” the statement added.

Similarly in May, Alavi announced that the country’s security forces had identified and disbanded about 30 terrorist cells over the past Iranian calendar year, which ended on March 20, 2017.

Security situation in Iran’s southwestern and northwestern regions has particularly been tense and volatile. With a sizable yet largely marginalized Sunni population, the southwestern province of Sistan and Baluchestan can be a breeding ground for local militant and separatist movements as well regional and international terrorist groups such as the Islamic State and al-Qaeda. Sunni Baluchs, who constitute a plurality of the population in the province, have long suffered state-sanctioned discrimination, economic marginalization, cultural repression, disproportionate executions, torture, detention without trials and extra-judicial killings. Sistan and Baluchestan also borders Afghanistan and Pakistan, where the Islamic State has gained a foothold recently.

In the northeast, the Democratic Party of Iranian Kurdistan (P.D.K.I.) has resumed armed resistance against the Iranian regime. Mustafa Hijri, P.D.K.I.’s secretary general, said in January that their resistance was not “just for the Kurds in Iran’s Kurdistan, but it is a struggle against the Islamic Republic for all of Iran.” PDKI militants based in the Iraqi Kurdistan have repeatedly crossed the border and clashed with the I.R.G.C. in the Iranian province of Kurdistan.