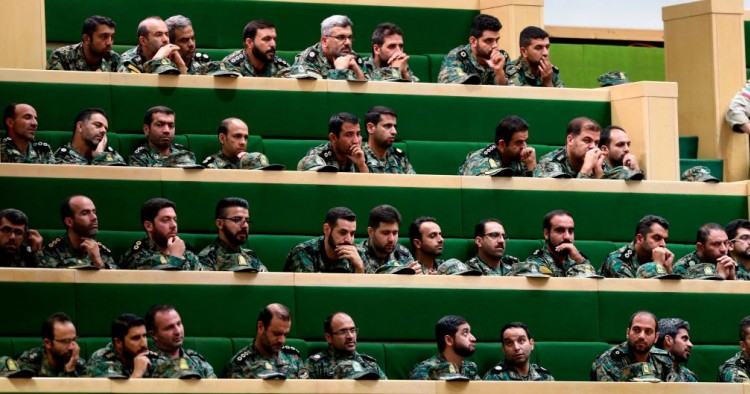 As the Islamic Republic shifts to a more muscular foreign policy in the face of mounting external pressure, its defense and security apparatus is also undergoing key changes. This includes a reshuffling within the Islamic Revolutionary Guards Corps (IRGC) and the creation of a separate “air defense force” within the regular Army (Artesh).

These discreet yet significant changes reflect the growing anticipation in Tehran of a highly confrontational phase in relations with the United States and its allies over Iran’s nuclear program. Iranian decision makers and strategists are increasingly convinced that once on a war footing, the Islamic Republic cannot afford the same security failures that led to the death of Iran’s “missile father,” Gen. Hassan Tehrani Moghaddam, in a 2011 explosion near Tehran, or the heist by Israel of over half a ton of its “atomic archives” in early 2018. The IRGC is in charge of protecting Iran’s nuclear and missile programs from foreign espionage and sabotage.

On July 22, Iranian media reported that the government had captured 17 spies and infiltrators working for the U.S. Central Intelligence Agency (CIA) and sentenced some of them to death. “The identified spies were employed in sensitive and vital private sector centers in the economic, nuclear, infrastructure, military, and cyber areas ... where they collected classified information,” the Ministry of Intelligence said in a statement.

Much less publicized, however, are reports of high-profile removals and replacements within the IRGC and more broadly, the armed forces, as part of a systematic effort to enhance their operational efficacy at a time of growing internal and external threats and amid a crackdown on leaks and loose ends.

In a surprise announcement on April 21, Supreme Leader Ayatollah Ali Khamenei appointed Gen. Hossein Salami, the former deputy commander of the IRGC, as the elite force’s new head. Khamenei had extended the tenure of the IRGC’s former commander-in-chief, Gen. Mohammad Ali Jafari, by another three years in 2017 after he had served for a decade. The decision to replace him with Salami was thus unexpected and premature. The timing was also notable, coming about two weeks after the U.S. designation of the IRGC as a foreign terrorist organization (FTO) and shortly before the Trump administration’s decision to halt sanctions waivers for buyers of Iranian oil in an attempt to bring its crude exports down to zero. To further tighten the screws on Tehran and its regional activities, Washington simultaneously offered a reward of up to $10 million for intelligence that could help disrupt the financial networks and dealings of Lebanese Hezbollah, Iran’s primary foreign proxy in the Middle East.

A day earlier, on April 20, the IRGC’s head of security, Gen. Ali Nasiri, was also removed and replaced with Gen. Fathollah Jamiri — after serving only a year and a half in his post. Nasiri was in charge of the IRGC’s “protection” division, which oversees security for key Iranian officials, critical centers, and organizations, as well as airports across the country.

Now there are unsubstantiated reports that Gen. Nasiri is in custody on suspicion of espionage, or failure to prevent it, and that Jafari, the IRGC’s former top commander — now relegated to leading the elite force’s Baghiatallah Cultural and Social Base, which oversees efforts to combat “enemy propaganda” and promote the IRGC’s revolutionary ideology  — is under scrutiny as well.

“These are all fake news propagated by the Israeli regime and media to prove that their claims of infiltration into Iran’s security organizations in general and theft of its top-secret atomic documents in particular were authentic,” an IRGC-affiliated intelligence analyst based in Tehran told MEI. IRGC Spokesman Brig. Gen. Ramezan Sharif has also dismissed the reports as “disgusting falsehoods.”

Yet the timing, speed, and scale of the leadership changes within Iran’s sprawling security and intelligence apparatus are too significant to easily shrug off as foreign propaganda and fake news.

In addition to Gen. Nasiri, Gen. Mostafa Rabiei, former head of the IRGC’s “inspection” division, and Gen. Mohammad Toulayi, former deputy of IRGC’s strategic affairs, have lost their positions over the past three to four months and have reportedly fled the country or been detained.

Meanwhile, in a decree on July 2, Ayatollah Khamenei named Gen. Gholamreza Soleimani as the new commander of the Basij (Mobilization) Organization, an IRGC volunteer paramilitary force, headed by Gen. Gholamhossein Gheibparvar for the last two and a half years. Notably, the commander before Gheibparvar, Gen. Mohammad Reza Naghdi, held the post for over seven years from October 2009 until November 2016.

According to Saeid Golkar, an IRGC expert at the University of Tennessee at Chattanooga and author of Captive Society: The Basij Militia and Social Control in Iran, the grassroots body has been “one of the most effective forces in the clerical regime’s toolkit for combating domestic unrest.”

“The Revolutionary Guards is going through a system upgrade and modernization process aimed at making it up for the task in an emergent threat environment,” Golkar told MEI.

Along these lines, Gen. Naghdi was promoted in May from his position as the IRGC’s “cultural and social” deputy to its “coordinating” deputyship, which presides over relations between the elite group’s various “divisions,” including ground forces, navy, aerospace, and the Basij. Lastly, Hossein Taeb’s tenure as head of the IRGC’s intelligence organization was extended, while his deputy, Gen. Hossein Nejat, was replaced with Gen. Hassan Mohaghegh.

The rapidly increasing likelihood of domestic unrest and social revolt stemming from the Trump administration’s “maximum pressure” campaign against the Iranian economy is, however, only one component of the new threat environment.

Another is an unprecedented escalation of tensions between Iran and its nemeses in the region, expected to worsen over the coming months as Tehran shifts to a more offensive military posture marked by nuclear escalation and military retaliation. The Iranian government’s recent decision to raise the level of uranium enrichment beyond the 3.67% permitted by the nuclear deal and the retaliatory seizure of the British tanker Stena Impero in the Strait of Hormuz were the latest manifestations of this security strategy.

A few weeks ago, Iran and the U.S. stepped back from the brink of a military conflict that could have culminated in an all-out war engulfing the entire Middle East. The near miss occurred after President Donald Trump called off military strikes against Iranian positions — in response to the IRGC’s shootdown of an American reconnaissance drone — only 10 minutes before impact.

During IRGC Commander-in-Chief Gen. Salami’s inauguration ceremony on April 24, the chairman of the Supreme Leader’s military affairs office, Mohammad Shirazi, highlighted the IRGC’s “40-year-long record” and the “higher expectations” that Ayatollah Khamenei had of it. “Of the emphatic orders of the Leader in this reshuffle was to utilize the points of strength ... and eliminate weaknesses and defects,” he stated.

To drive home the point, Gen. Qassem Soleimani, the head of the IRGC’s foreign operations unit, the Quds Force, added during the same event that there is “a nugget of wisdom behind every appointment by the Leader.”

Clearly, this “nugget of wisdom” is to prepare the Islamic Republic for an uphill struggle for survival — both at home and abroad.

Maysam Behravesh is a senior political analyst at Persis Media and a PhD candidate in the Department of Political Science at Lund University, Sweden. Follow him on Twitter @MaysamBehravesh. The views expressed in this article are his own.

Iran’s rising Generation Z at the forefront of protests