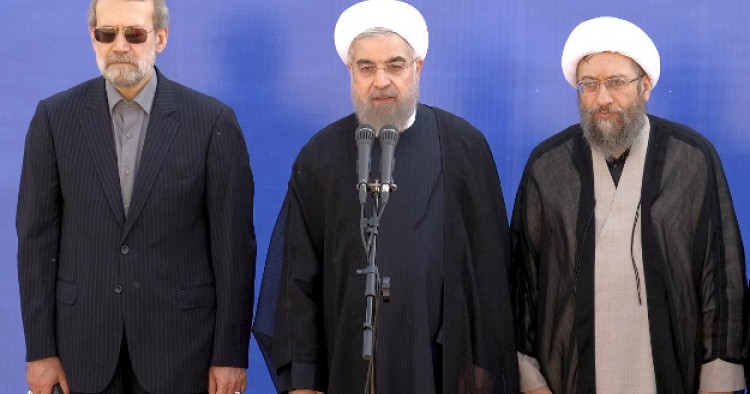 Iran's Judiciary Chief Sadegh Larijani has called for the creation of special courts where individuals and government officials can file lawsuits against U.S. sanctions and “adventurous moves” in the region, the Iranian media reported. Speaking to Judiciary officials in Tehran, Larijani praised the Iranian Parliament for passing a bill to counter U.S. actions in the region in response to the latest U.S. sanctions on Iranian entities involved in the country’s missile program and support for terrorism. "One of the real measures in this plan that should be adopted, if approved by the Guardian Council, is specifying some courts to do litigation against the US sanctions and adventures," he said. Larijani emphasized that the bill showed a sense of unity among all Iranian officials to stand against U.S. anti-Iran actions.

Comment: On August 2, President Donald Trump signed a congressional bill that imposes additional sanctions on Iran, Russia and North Korea. Hours after Trump signed the legislation, the Iranian Foreign Ministry announced that Tehran will take “appropriate and proportionate” retaliatory measures, including further empowering the I.R.G.C. and its elite Quds Force.

Days later, the Iranian Parliament’s National Security and Foreign Policy Committee approved a bill titled “Countering America’s Adventurous and Terrorist Actions” in response to the latest U.S. sanctions. According to the text of the bill published in the Iranian media, the legislation obliges the ministries of foreign affairs, defense and intelligence as well as the Islamic Revolution Guards Corps (I.R.G.C.) and its elite Quds Force to work together to prepare a “comprehensive strategic plan” in coordination with the Supreme National Security Council to “counter the U.S. threats and subversive activities” against the Islamic Republic. The bill also requires relevant authorities to take actions against America’s “imperialistic, terrorist and divisive policies” and to report on the implementation of the plan to the parliament on an annual basis. According to the bill, the strategic plan, among other things, should cover the following:

In addition, the Ministry of Foreign Affairs and the Quds Force are required to identify and prepare a list of U.S. individuals and entities that “support terrorism” in the region. The bill also obligates the government to allocate more than $300,000,000 to further upgrade the country’s missile capabilities and a similar amount to the Quds Force, which is responsible for the I.R.G.C.’s external operations, particularly in the conflict zones of Syria, Iraq, and Afghanistan.