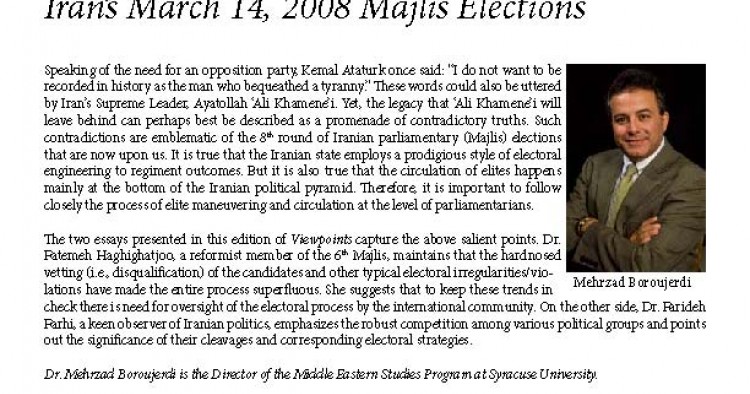 One of the strangest features of contemporary Iranian politics must surely be the reality that despite the concerted and successful effort to narrow the range of candidates allowed to run for various political offices, competition among individuals and groups has not only remained unabated, it has intensified. The elite jockeying that has taken place in the past few months, leading to the upcoming March 14 Majlis elections, is a good example of the competitive intensity that had come to characterize Iranian politics.

The current election cycle for the 290-seat Parliament began with a determination by principlist forces (principlist is now commonly used to refer to an array of forces that previously called themselves conservative or fundamentalist) close to the administration of Mahmud Ahmadinejad not to repeat the same mistake they made in the municipal elections of 2006. In those elections, individuals aligned with the President, rather smug about their man, chose to offer their own slate of candidates, particularly in large cities, and ended up with a relatively weak showing in comparison to the more centrist principlist forces and even reformist candidates.

To avoid this scenario, a two pronged strategy was designed that combined a political process intended to unify the principlists and a highly partisan effort to disqualify not only reformist candidates but also centrist ones. But both prongs of this strategy have faced resistance, bringing forth the possibility of a repeat of the results of the municipal elections.

In order to unify the principlists, three major legs of principlism, including Ahmadinejad supporters, the old guards of the Islamic Coalition Party as well as some critical of Ahmadinejad’s policies, were brought together under the umbrella of the Unified Principlist Front with the intent to offer a unified list of candidates, particularly for the city of Tehran which has traditionally been the city from which most of Majlis’ leadership is drawn. But, as negotiations about the content and order of the list dragged on, it gradually became clear that some of the major principlist players were dissatisfied. A key candidate for the leadership of the next Majlis, ‘Ali Larijani, ended up deciding to run from the city of Qom. Moreover, the announcement of a competing list (which will include some but not all the names on the United Principlist Front list) identified with the Comprehensive Principlist Front — a front loosely identified with three well-known principlist players: Ali Larijani, Mohsen Rezaie and Muhammad Baqer Qalibaf — suggests that the splits that became evident during the municipal elections continue to persist.

The second prong of the strategy by the Ahmadinejad forces also faced resistance and in fact can be considered to have received a pushback. Since 1991, extensive vetting of candidates has been the work of the conservative Guardian Council. This time around, extensive and highly partisan disqualification occurred at the level of Electoral Executive Boards which operate at the provincial levels and are appointed by the Interior Ministry. The disqualifications included many current reformist and centrist deputies of the Parliament and past cabinet ministers or high ranking officials (even including a grandson of Ayatollah Khomeini), eliciting a loud reaction. The reformist and centrist political organizations cried foul. But there were expressions of concern on the part of some principlists as well. One well-known principlist deputy, Ahmad Tavakoli, went as far as to write a letter to the Guardian Council expressing his concern. Ayatollah Khomeini’s grandson (not the one who ran and was initially disqualified but the one who runs his estate), gave an interview to a reformist outlet, expressing his dissatisfaction.

The centrist and reformist elders — Akbar Hashemi Rafsanjani, Mehdi Karroubi, and Muhammad Khatami — having already made their commitment to taking these elections seriously no matter the extent of disqualifications, also began doing what they always do: lobbying at the highest levels of the system. Karroubi, the leader of centrist National Confidence Party, even had publicized meetings with Ayatollah Jannati, the secretary of the Guardian Council, and Ayatollah Khamene’i, ultimately helping to bringing forth the rather unusual specter of the Guardian Council reversing some of the disqualifications meted out at the Electoral Executive Board level.

To be sure, the disqualification of many well-known leaders of the reformist movements from Islamic Iran’s Participation Party and Islamic Revolution’s Mojahedin Party was not reversed. Their imputed “crime” is that during their famous sit-in in the 6th Parliament, when they protested their en masse disqualification for the 7th Majlis, they did something illegal by questioning the legitimacy of the institutions of the Islamic Republic. Still the re-qualification of many centrist and a few reformist candidates is an important pushback at the top.

The pushback also found partial expression in the discursive terrain. For instance, when the head of Islamic Revolution’s Guard Corps (IRGC), ‘Aziz Jafari, in a speech to members of basij militia, took a stance in favor of principlists and essentially asked members of the basij militia to vote for principlists out of religious obligation, he was immediately criticized for ignoring Ayatollah Khomeini’s most famous injunction against military involvement in politics. Jafari had to clarify his position by saying that his words should be interpreted as a defense of principlism as the ideology of revolution and not as a political current.

The impact of all these maneuvers and highly partisan bickering will only be revealed on Election Day. What is evident though is that the attempted move for political dominance by a single bloc, which is rightly or wrongly identified as Ahmadinejad’s camp since he is the most public and partisan face of it, has been resisted by an “establishment” that for years has been more or less used to a certain balance or plurality in governance among political rivals. As such, what pre-election maneuvering has shown so far is that the stakes have little to do with ideological (since resistance is also coming from within the principlist camp) or even generational divides (since there are young and old, war veterans, and clerics on all sides) and are more about the shape of power distribution in the Islamic Republic.