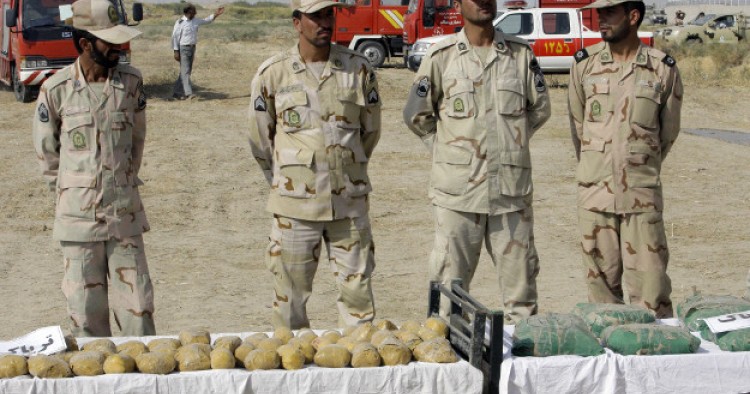 Iran’s anti-narcotics police forces have seized more than 16 tons of illicit drugs in the southern province of Hormozgan, the Iranian media reported. According to Hormozgan’s Police Chief Brigadier General Azizollah Maleki, the security forces confiscated the drugs from 219 vehicles over the past three months. He added that the seized drugs included12,975 kg of opium, 3,115 kg of hashish, 39 kg of heroin and 27.5kg of various other types of narcotics. The police have also arrested more than 1,000 individuals allegedly involved in drugs trade – including 83 kingpins. Separately, Iran’s Drug Control Headquarters (I.D.C.H.) announced over the weekend that it planned to incinerate 160 tons of narcotics in seven provinces this week. I.D.C.H.’s Spokesman Perviz Afshar also revealed that the number of drug addicts in Iran has climbed to nearly three million people. Afshar further warned that drug cartels and arms smugglers are developing a “sophisticated connection” inside Iran and in the region.

Comment: Iranian leaders often praise their country’s “sacrifices” in the fight against narcotics. Earlier this year, Iran’s Foreign Minister Javad Zarif blamed Western countries for the failure of international efforts to tackle drug trafficking and claimed that the Islamic Republic pays a high price for its contribution to combating the global illicit narcotics trade. “West’s failure in preventing drug trafficking is a major problem. The fight against drug smuggling should also not be politicized,” Zarif emphasized.

Zarif is right that Iran has suffered immensely from drug problems for decades. As a neighbor of Afghanistan, which produces more than 80 percent of the world’s illegal narcotics, Iran is a major transit route for Afghan opium and its derivatives smuggled to the Middle East and Europe. The trafficking and use of narcotics have also created major security, economic and health problems for Iran. The country’s health ministry officials warned earlier this year that drug problem has become a national epidemic. The U.N. Office of Drugs and Crime has also warned that Iran is facing one of the worst addiction crises in the world. Last December, photographs of homeless people, most of them drug addicts, published in the Iranian media triggered a national outcry in the country.

But while Iranian leaders often portray Iran as the world’s stalwart ally in the fight against drugs, the Islamic Republic has had a checkered track record and some of its policies at home and actions abroad exacerbate the drug problem in the region and around the world. For example, although some 4,000 Iranian police officers and border guards have lost their lives fighting drug kingpins and seizing drug shipments entering the country from Afghanistan, Iran’s Islamic Revolution Guards Corps (I.R.G.C.) is said to resell some of the confiscated drugs to international smugglers. In 2012, the U.S. Department of the Treasury designated General Gholamreza Baghbani, a top commander of the I.R.G.C. Quds Force, as a Specially Designated Narcotics Trafficker. “Today’s action exposes IRGC-QF involvement in trafficking narcotics, made doubly reprehensible here because it is done as part of a broader scheme to support terrorism. Treasury will continue exposing narcotics traffickers and terrorist supporters wherever they operate,” then-Under Secretary for Terrorism and Financial Intelligence David S. Cohen said. Moreover, the I.R.G.C. has contributed to Afghanistan’s instability and growing opium cultivation and trade there by assisting Taliban groups fighting in western and southern Afghan provinces - a region where most of Afghanistan's narcotics are cultivated and produced.