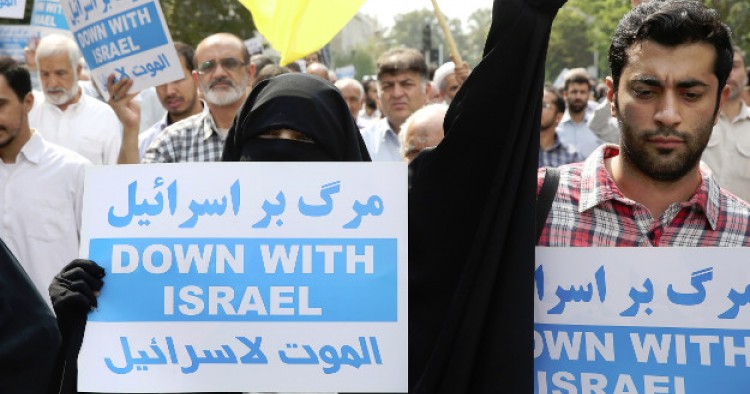 On Monday, the new chief commander of Iran’s Army said Israel had a maximum life span of 25 years and that the Jewish state would perish even earlier if it “makes any mistake” over its remaining lifetime. “The notion that the Zionist regime of Israel will not be existing 25 years from now does not mean that it would have a full time span of 25 years to live,” Tasnim News Agency quoted Major General Abdolrahim Mousavi as saying. He also warned that any Israeli mistake would result in the destruction of Haifa and Tel Aviv.

Comment: It is at least the second time in a month that the new commander of the Iranian Army is talking about Israel’s demise.  Speaking at a cultural event in the holy city of Qom on August 24, Mousavi praised “acts of devotion” of Iranians killed during the 1980s Iran-Iraq war as well as those killed in Iraq and Syria in recent years. He particularly spoke about Mohsen Hojjaji, a member of the Islamic Revolution Guards Corps (I.R.G.C.) who was recently decapitated by Islamic State fighters along the Syrian-Iraqi border. “As a result of the determination of holy warriors such as martyred Hojjaji, the Zionist regime will not exist in 25 years,” he added. Mousavi, who was recently promoted by Supreme Leader Ali Khamenei, further stressed that the “martyrdom-seeking and jihadi spirit of the Iranian people” has made it impossible for the United States and its allies to militarily attack Iran. But he cautioned that if any country launches a war against Iran, it will be the Islamic Republic that will determine how and when the war will end.

Nor is Mousavi is the only Iranian official who has called for the annihilation of Israel or predicted its collapse in 25 years: Khamenei, former President Mahmoud Ahmadinejad and other senior Iranian political and military leaders have made similar remarks in the past. “Today, the primary and religious duty of Muslims is to liberate Jerusalem and to destroy the cancerous seed of evil Zionism,” then Iran’s Defense Minister Brigadier General Hossein Dehghan said in February. He further noted that the Islamic Republic had increased the range, precision and longevity of its ballistic missiles and will continue to increase its defensive power, Dehghan said.

In December, Khamenei made a similar remark: “The Zionist regime - as we have already said - will cease to exist in the next 25 years if there is a collective and united struggle by the Palestinians and the Muslims against the Zionists.”

Iranian leaders’ call for the destruction of Israel also discredits Iranian diplomats’ claim that their country’s missiles are only for defensive purposes and do not pose any threat to regional countries. The Islamic Republic’s Sejjil missile with a range of about 1240 miles and its medium-range Shahab-3 can both reach Israel. When Iran test-fired ballistic missiles in 2016, one had “Israel should be wiped off the Earth” inscribed on it in Hebrew. The move prompted the U.S. Treasury to slap new financial sanctions on Iranian entities involved in the country’s ballistic missile work.