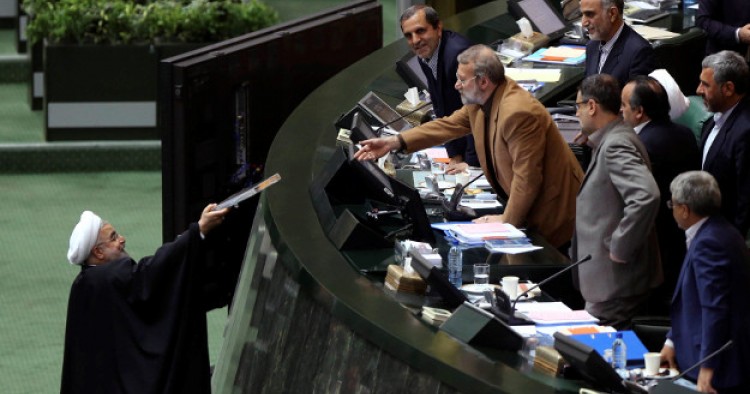 A top Iranian lawmaker said that the parliament’s National Security and Foreign Policy Commission has finalized a legislation that would counter the U.S. “adventurous and terrorist” actions in the region, state-run Islamic Republic News Agency reported today. “This bill has set some obligations for the government and the government is obliged to implement them,” Alaeddin Boroujerdi emphasized. He further noted that the bill is a reaction to the latest U.S. Senate legislation that would impose new sanctions against Iran’s missile program, support for terrorism and human rights abuses. He explained that the bill will be submitted to the parliament’s presiding board after the recess.

Comment: On June 15, the U.S. Senate overwhelmingly passed a bill that imposes new sanctions on Iran and Russia. The legislation still needs to be approved by the House of Representatives and signed by President Donald Trump to become law. Iranian officials have reacted angrily to the bill and vowed retaliatory measures. Ali Akbar Velayati, a senior aide to Supreme Leader Ali Khamenei, said the Senate bill was a violation of the Joint Comprehensive Plan of Action. “The [Iranian] committee tasked with monitoring the J.C.P.O.A. will certainly analyze the issue and appropriately respond to U.S. sanctions,” he added.

But it is not yet clear how Tehran will respond to the new U.S. sanctions. Tough rhetoric aside, Tehran’s response to the U.S. sanctions in recent months has been largely symbolic. Last month, for example, Iran sanctioned nine American entities in retaliation to the U.S. Treasury’s sanctions against the country. In a similarly move in March, Iran blacklisted 15 American companies after the Trump administration sanctioned the Iranian missile program. But none of the American firms do business in Iran.

In the past, however, Tehran has stressed that its response will be more serious if nuclear-related sanctions are reinstated. Foreign Minister Javad Zarif at one point threatened to walk away from the nuclear deal if it no longer served Iran’s interests. Moreover, Boroujerdi last month warned that the Islamic Republic would designate the U.S. Army and the Central Intelligence Agency as terrorist entities if Washington blacklisted the Islamic Revolution Guards Corps (I.R.G.C.).