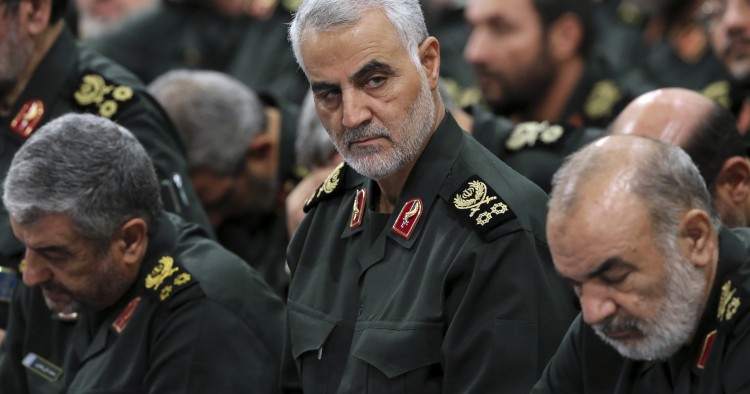 The extraterritorial operations Quds Force of the Islamic Revolution Guards Corps (IRGC-QF) is supposedly a secret special operations unit. Yet, leading commanders of the Quds Force have aggressively been seeking public attention lately.

Earlier today, Major General Qassem Soleimani, IRGC-QF chief commander, addressed the 41st Sarallah Division of the Guards in his native Kerman province. Simultaneously, Brigadier General Esmaeil Qaani, Soleimani’s deputy, addressed the public in Mazandaran province. Two days ago, a certain Commander Ali Mousavi, adviser to Soleimani, addressed the public in Fardis in Alborz Province. On February 15th, addressing a gathering on the occasion of the tenth anniversary of the assassination of Imad Mughniyeh, Soleimani once again reached the international news headlines by his statement: “Revenge of the blood of Imad Mughniyeh is not [just] firing of a missile and killing an individual. The revenge of this blood is the Zionist regime’s annihilation.”

The question of course is why Soleimani and other senior commanders of the Quds Force increasingly appear in public rather than pursuing their work in the shadows.

Analysis of the timing and content of Quds Force leaders’ recent speeches may provide some insight.

First, the war in Syria is entering a new and more complex phase following the defeat of the Islamic State. There is an increased risk of direct conflict between Iran and its Shiite militia allies on the one hand, and the United States, Israel and Sunni regional powers on the other. This heightened tension and risk may also have widened the analytical gap among the ruling elites of Iran, in particular between President Hassan Rouhani’s technocratic team and the IRGC commanders. That polarization has also a domestic dimension, where Rouhani is trying to limit the Guards’ role in the economy.

All speeches by IRGC officials mention developments in Iraq and Syria and stress the necessity to remain steadfast in the face of foreign enemies and conspiracies against Iran. Equally important is the fact that Soleimani warns against “those who try to eradicate the Guards under various pretexts.” This message may be directed at three different audiences: Soleimani warns the technocrats against even trying to change Iran’s regional strategy, or to reduce the IRGC’s domineering role in Iran’s economy. To regional friends and foes alike, Soleimani signals the IRGC’s willingness to continue supporting Shiite militias.