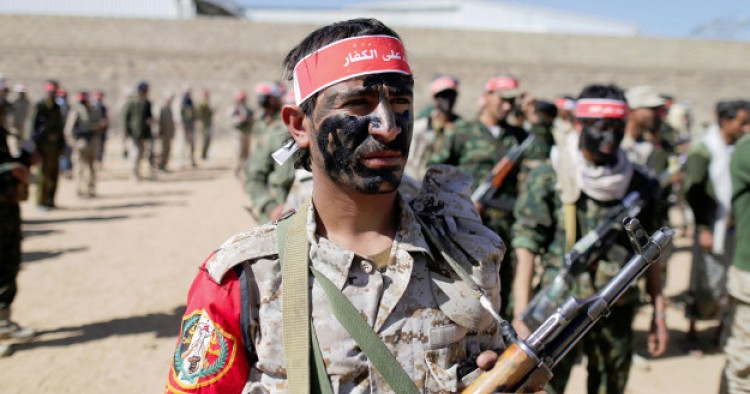 Iran’s regional militia allies have vowed retaliation for the death of Houthi leader Saleh al-Sammad in Yemen, the Iranian media reported. The Houthi rebels as well as Iran’s regional militia proxies said they would hold not only Saudi Arabia but also the United States accountable for the killing of al-Sammad. The Iraqi Hezbollah said the Houthi leader’s assassination will open a new chapter in the fight against Saudi Arabia, which it said is “mired in the Yemeni quagmire.” It also accused Washington of complicity. “The crime of Saleh al-Sammad’s assassination has been committed with America’s support,” the Iranian-backed militia group added. Abu Muhandis, the chief operational commander of Iraq’s Popular Mobilization Force, wrote a letter of condolence to the Houthi leadership, and emphasized that al-Sammad’s killing “will fuel the flames of Yemen’s national resistance” against Saudi Arabia. Separately, Qais al-Khazali, the head of Asa’ib Ahl al-Haq, a PMF group also fighting with Iran’s Revolutionary Guards in Syria, echoed a similar view – warning that the assassination would only embolden resistance against the “aggressor enemy.”

The leader of Yemen's Houthi Ansarullah movement, Abdulmalik Al-Houthi, also said that Riyadh and Washington bear responsibility and consequences for “this crime” and pledged to avenge al-Sammad’s death.

The Iranian media speculated that the Houthi rebels will exact vengeance by either launching more missiles into Saudi Arabia or assassinating Saudi officials.

Comment: Al-Sammad, who was the president in the Houthi-controlled administration in northern Yemen, was killed in a Saudi-led coalition strike last week in the port city of Hodeidah. Al-Sammad was the highest ranking Houthi leader killed by the coalition since the Yemeni war began three years ago. The Houthis have seized the capital Sana’a and are fighting the internationally-recognized government of Yemen – now in Aden – as well as the Saudi-led coalition backing it.

It remains to be seen if al-Sammad’s death would strike a significant blow to the Houthi movement. If his whereabouts and movement were leaked to the coalition, it also means factional divide within the Houthis. But while Al-Sammad was a military propagandist and the head of the Houthis’ political wing, he was not in charge of the Houthis’ military operations. It is also unclear whether al-Sammad’s death would have any impact on the nascent talks between the Houthis and the coalition-backed Yemeni government about a potential political settlement.

The Houthi leader’s death also comes at a time when the Houthis have stepped up missile and drone attacks in the Saudi mainland – heightening tension between Tehran and Riyadh. The Saudi military today said it intercepted a Houthi missile today. Saudi Arabia and its allies, including the United States, accuse Iran of providing weapons and ballistic missile technology to the Houthis.

In the past one year, the Houthi rebels have also established ties with Iran’s regional militia proxies. Last month, Abdul Malik al-Houthi, the leader of the rebels, said his fighters would fight alongside the Lebanese Hezbollah against Israel in any future wars.