Iran’s rising Generation Z at the forefront of protests 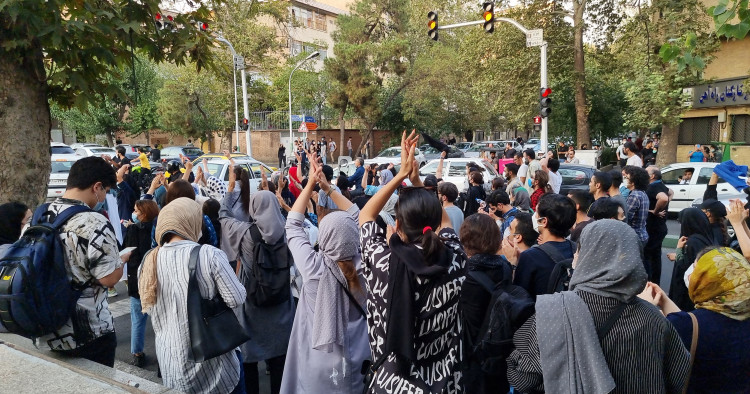 Furious and impassioned protests spread across dozens of Iranian cities following the tragic death of 22-year-old Mahsa Amini in mid-September. Amini was arrested by the infamous Iranian “morality police” — Guidance Patrol — on Sept. 16, for allegedly “improperly” wearing her hijab. She died in their custody two days later, with signs of bruises on her face and body.

Tens of thousands of Iranians came out into the streets and many continue to do so to this day, despite the regime’s violent, sometimes deadly crackdowns and threats of arrest. Although anti-regime protests aren’t unheard of in the Islamic Republic, a key difference between the current and previous waves of demonstrations has been the prominent role played by the country’s Generation Z, also known as Zoomers.

Members of Iran’s Generation Z — those born between 1997 and 2010, years that correspond to 1375-1389 in the Iranian calendar — are better known as Dahe Hashtadi (“the Eighties”) in Persian. This group of Iranian youth makes up only about 6 million (less than 7%) of the country’s population of 83 million, and yet they have undisputedly been among the foremost leaders of the current protests.

In general, Iranian Zoomers have the reputation of being indifferent to politics, religion, customs, and traditions, like many others their age around the world. Unlike previous generations in Iran, they tend not to worry about being judged and will openly speak about their interests or dislikes, even if it loudly crosses the ruling system’s traditional red lines.

According to Jabbar Rahmani, an assistant professor of anthropology at the Tehran-based Institute for Social and Cultural Studies, “This generation does not adhere to idealism and ideological idealizations like the previous generation” and generally “avoid[s] imagination above imaginary clouds.”

While Iranian Zoomers make up a relatively small proportion of the country's population, they are extremely skeptical and are “digital natives.” In contrast to their parents and grandparents, who were strongly restricted by conservative social pressures and the censorship of the ruling system during the 1980s and 1990s, Iran’s Zoomers have had greater access to information and the outside world. Their active presence on and access to online social media has given them better analytical skills, a platform to voice their concerns, and the courage to speak out.

As a result, according to sociologists, this generation tends to question authority, doesn’t believe in the existing red lines drawn by society or the regime, and is unwilling to take for granted the holiness of any sacred cows, whether religion, the country’s laws and regulations, or anything else.

The current protests in Iran might be the first time most of the rest of the world has heard the voices of Iranian Zoomers, but they had already stolen the show on several occasions in their own country. One of the first major controversies triggered by Gen Z was in 2014, when tens of thousands showed up to attend the funeral ceremony for Morteza Pashaei, a famous young pop star. This was surprising to many. Such massive ceremonies had been common for religious figures or those who lost their lives for upholding the values of the Islamic Republic but never before for a music icon, let alone one who, today, would be considered a threat to Islamic values.

Later notable events include a surprisingly large non-political gathering of high school students to celebrate the end of school year exams, in 2016, at a shopping mall in western Tehran that was dispersed by police as well as a similar incident in Shiraz, earlier this summer. The authorities’ reaction in all these cases involved arrests, criminal charges, and declarations by high-level officials about the need to more strictly enforce the hijab law, uphold Islamic values, as well as increase state control over the internet and social media.

While at first glance it might have seemed as though the Islamic Republic was suddenly overcome by angry youths who unexpectedly poured into the streets to protest last month, in reality many observers had warned for years that this was coming. In addition to the events described above, numerous studies conducted by various academic bodies and expert researchers also pointed to such brewing challenges ahead.

Following a wave of mass social unrest in January 2018, Iran’s then-interior minister, Abdolreza Rahmani Fazli, announced the findings of one such study, conducted by the state-backed Office of Cultural Studies. According to him, apart from the usual “political, economic and social dissatisfaction,” the Islamic Republic now faced a fourth driver of tensions: the “deep generational gap.”

More than a year earlier, Saeed Razavi Faqih, a sociologist and former political prisoner and activist, offered an analysis of Iran’s socio-political situation and warned of the possible dangers ahead, many of which we are witnessing on the streets of Iran today. His warnings were published on Dec. 7, 2016, in Ensaf News, in a piece titled “The eighties [Gen Z] will pass everyone.” According to Faqih, “This new generation has completely different demands, trends, and views and basically shares no common language with the managers and officials of the country’s administration.” Noting that these young people would start entering universities in 2020, he warned that “as soon as they [Iranian Zoomers] become aware of their ability to influence and bring about change, this mass population ruling the universities in big and small cities will transform everything.”

A more recent warning of this sort came in 2019, when Sobhe Sadegh, the weekly publication of the Islamic Revolutionary Guard Corps (IRGC), described the heretofore mostly ignored Iranian Gen Z as a possible threat to the Islamic Republic’s values. According to Sobhe Sadegh’s writers, due to the Zoomers’ pluralistic views, they will likely prove difficult to control, or, as the writers put it, “their governance will not be as easy as with previous generations.”

Zoomers in the lead

The danger that many in the Islamic Republic establishment had warned about has finally arrived. The young and fearless rising generation of Iranians is not only protesting in the streets and on social media, but Iranian Zoomers have also earned the respect and support of their parents and elders to the extent that they have joined them in their struggle against the Iranian ruling system.

According to official figures from the ultra-conservative Javan Daily, another IRGC-affiliated paper, “93% of the protesters” are no older than 25, which signals the rise of a “new generation of rioters in the country,” it added.

The Iranian government has sought to reduce the protesters’ ability to coordinate by disrupting their access to the internet and blocking many social media and messaging apps, such as Instagram and WhatsApp, and even some popular online games. Yet so far, it has not been able to stop them.

Meanwhile, older generations of Iranians who failed to achieve long-fought-for political and social freedoms during the past four decades are now expressing public admiration for their children and young countrymen. Iran’s Gen Z has been remarkable for its blunt willingness to not only question the status quo and demand their personal rights but also to join together in this cause by holding mass street protests even in the face of deadly crackdowns.

Despite years of warnings about the growing threat to the regime posed by the country’s widening “generational gap,” until now the Iranian authorities mostly chose to close their eyes to this issue. Crucially, the government has refrained from making systematic changes or passing any liberalizing reforms to meet rising Zoomers’ evolving needs.

Instead, the Islamic Republic has relied on its existing playbook of denying Iranians the right to think and act differently while seeking to further marginalize the liberal segments of society. In mainstream media, the Zoomers, in particular, have been labeled in mostly pejorative terms such as “anarchist,” “unethical,” and “isolated.” The country’s policies and resources are being directed at imposing further restrictions on those who reject the founding values of theocratic Iran.

The zero-tolerance policy toward anything deemed antithetical to the Islamic revolution’s identity, the push to implement the so-called internet “Protection Bill,” and symbolic initiatives, such as the “Hello Commander” pop song, are just a few of the ways the Islamic Republic has attempted to control its youth. All these measures have proven unsuccessful.

The young generation of Iran is leading the current protests at a time when, according to recently published figures by Iran’s Statistics Center, some 77% of Iranians between the ages of 15 to 24 are neither working, being trained, nor studying, up from around 31% in 2020.

Given state control over the country’s ailing economy and the widespread corruption in the regime, which has tried to fill all government posts with like-minded, ultra-conservative individuals, the great majority of younger Iranians are fed up with the endless double standards, growing socio-economic gaps, and systemic corruption. Consequently, Gen Z has seized the moment of massive social discontent and chosen to openly confront the Islamic Republic. Zoomers see no brightness in their future, even in the decreasingly likely event that the Iran nuclear deal is revived.

Many experts, including sociologist Abbas Abdi, believe that to bring an end to this crisis the Islamic Republic must reconsider and change many of its policies in line with the needs and requirements of a modern society. But the ruling elite is unlikely to take this course given that, in their view, agreeing to even a single demand would lead to additional and ever more far-reaching demands in the future.

Although the outcome of the current protests is far from certain, one thing is clear: Iranian Zoomers will have a very active role to play in shaping their country’s future.

Maysam Bizaer is an analyst and commentator who focuses mostly on Iran's foreign policy, politics, and economy. He is a frequent contributor to a number of international media and U.S.-based think tanks covering the Middle East. Follow Maysam on Twitter @m_bizar.