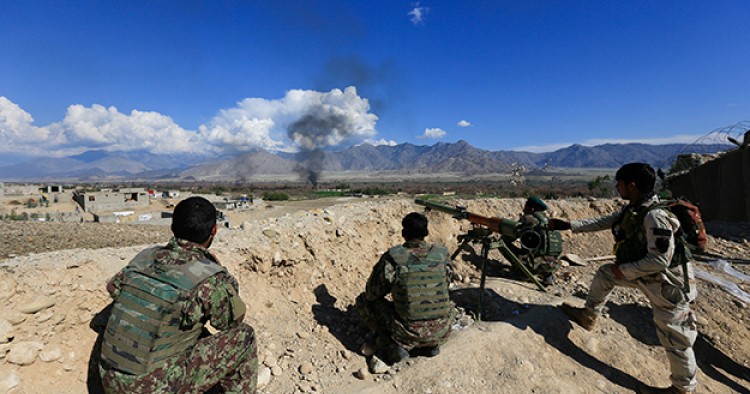 Accusations are mounting that Iran is ramping up its engagement with the Taliban in Afghanistan. Like a lot of Iran’s murky foreign policy, it is difficult to separate the wheat from the chaff. The three questions that need to be answered to clear up the murky relationship between Iran and the Taliban are: why the change in Iran’s policy; when did this policy change occur; and what is the level of support afforded to the Taliban?

The Taliban’s Sunni-first ideology, its history of persecuting Afghan Shiites, and its attacks on Iranians make the group the unlikeliest of allies for Iran.

In the late 1990s, the Taliban’s deliberate anti-Shiite program provoked a near-all-out war with Iran. During the Afghan civil war, the Taliban aimed to cleanse northern Afghanistan of Afghan, Shiite Hazaras. In the wake of the Taliban’s advance, thousands of Shiite Hazaras were massacred. In 1998, a small Taliban unit entered the Iranian consulate in Mazari Sharif, Afghanistan’s third largest city, and rounded up and executed nine Iranian diplomats. Taliban units then moved to take over Bamiyan in central Afghanistan, the core of the Hazara ethnic group, and continued their massacre. Iran’s Supreme Leader, Ayatollah Ali Khamenei, accused Pakistan of backing the Taliban in capturing Bamiyan, and a force of 70,000 composed of Iranian Revolutionary Guards and Iranian military forces, mobilized along the Iran-Afghanistan border.

Iran became the main foreign backer of the Northern Alliance, the Taliban’s main domestic rival, and then tacitly cooperated with the United States in overthrowing the Taliban in 2001. Although Iran originally viewed the Taliban as an ideological threat, geopolitical dynamics post-9/11 changed Tehran’s original calculation.

Iran has ramped up its support due to recent events in Afghanistan, namely Washington’s erratic policy switch—from Obama’s scheduled drawdown in 2014 to the now seemingly done deal involving increased U.S. support, as evidenced by the recent dropping of the “mother-of-all-bombs.” The Trump administration’s u-turn has created the uncertainty in Afghanistan. This uncertainty may have played a role in influencing Iran to hedge its bets vis-à-vis Afghan actors, in particular the Taliban.

With the cooling period in U.S.-Iranian relations, after the new U.S. administration entered office, Iran’s leaders are concerned once again about the United States using Afghanistan as a base from which to launch a potential attack on their country. Thus in the short term, at least, the Taliban is furthering Iranian interests via its insurgency against the U.S.-backed government.

The rise of ISIS in the eastern part of the country is also of great concern to Iran. ISIS, which wields the most acute hostility toward Shiites, has recruited fighters to Iran’s west in Iraq and to its east in Afghanistan. Unlike the Taliban, ISIS ideology is transnational and can be used to stir up Iran’s restive Sunni populations. Yet, also unlike the native Taliban, the transnational terrorist group depends upon a nexus of recruiting, coopting, and coercing local groups in Afghanistan. The Taliban has grown to become one of ISIS’ primary enemies in Afghanistan, as ISIS competes with the Taliban, and aims to peel away disaffected fighters from Taliban ranks. Taliban and ISIS fighters regularly clash; in early May, more than two dozen fighters were left dead after an encounter in eastern Nangarhar province.

By providing limited support to the Taliban, Iran is hitting two birds with one stone: creating a buffer against ISIS and preventing the United States from using Afghanistan as a base against Iran.

2014 represents the critical juncture in Iran’s shift with the Taliban. In this year, the vast majority of international combat troops withdrew from Afghanistan, a major blow to the credibility of the Afghan government. Iran moved to formalize its relationship with the Taliban by allowing it open a foreign office in Mashhad, diversifying the pariah group’s international presence. The Islamic State also gained strength in Nangarhar province, starting in the middle of that year after several regional groups, including Al Tawhid Brigade and Ansar ul-Khilafat Wal-Jihad, pledged formal allegiance to ISIS. These events pushed Iran and the Taliban closer together.

In the spring of 2015, Taliban members from their political bureau in Qatar, led by Mohammad Tayyab Agha, travelled to Iran to discuss Afghan and regional affairs. And last May, Taliban leader Akhtar Mansour was killed in a U.S. drone strike as he returned to Afghanistan from Iran where he been staying.

This past December, the Afghan Senate opened an investigation into Iran’s military ties with the Taliban. Iran has also been accused of harboring Taliban leaders. Lawmaker Jumadin Gayanwal from Paktika province told VOA, “Iran not only has hosted Taliban families, it has supplied the group with weapons that could target and damage tanks and planes.”

Media accounts, such as this one, have fixated on the increasing levels of support afforded to the Taliban, but as of now, it still seems that Iran primarily perceives the Taliban as a useful enemy-of-an-enemy against both U.S.-led efforts in Afghanistan and the Islamic State. Iran will continue its marriage of convenience through providing just enough arms and training to the Taliban, which is different from a full-blown investment to change the equation in Afghanistan.

Iran recognizes that the group will eventually play some role in the Afghan government, so there is a benefit to a limited relationship for influence down the road. However, if either the United States or the Islamic State move to drastically alter dynamics in the country, Iranian leaders might, once again, have to recalculate their Taliban connection.