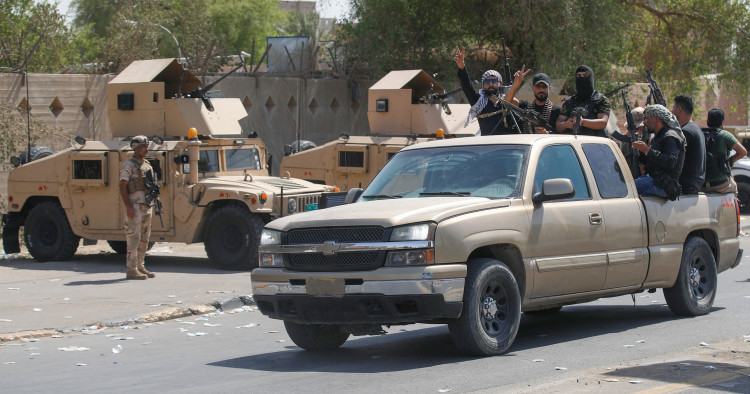 Iraq came close to civil war but stepped back from the brink last week. On Aug. 29, street fighting erupted between followers of Iraqi Shi’a cleric and political leader Muqtada al-Sadr and those of the Iran-aligned Coordination Framework (CF), after Sadr announced his “final withdrawal” from politics and the closure of the majority of Sadrist institutions. He also declared that he would no longer dictate actions to his supporters, who interpreted his announcement as a green light to storm Baghdad’s Green Zone, including the presidential palace, the government headquarters, and the parliament. They were met with force by militia members of the CF, resulting in an armed confrontation between the two warring factions, with dozens dead and hundreds injured. Iraqis spent the evening of Aug. 29 thinking the country was descending into an intra-Shi’a civil war.

The following day, Sadr held a press conference during which he distanced himself from the violence but called on his followers to withdraw immediately from the Green Zone, which they promptly did. Sadr’s decision to step back from the brink of war was likely prompted mainly by the intervention of Iraqi Grand Ayatollah Ali al-Sistani’s office, which called on him and his opponents to stop the violence. Despite episodic clashes between the warring camps in Baghdad and a few southern provinces since Sadr’s press conference, the security situation in the country has stabilized somewhat. There is an implicit agreement among Iraqi leaders to keep things relatively calm at least until Arba’een, on Sept. 16, when millions of Shi’a from around the world will partake in a ziyara (pilgrimage), traveling 50 miles between the holy cities of Najaf and Karbala.

The sectarian violence in Iraq attracted the attention of the United States. On Aug. 31, U.S. President Joe Biden telephoned Prime Minister Mustafa al-Kadhimi, calling on all Iraqi parties to resort to dialogue to resolve their differences. This was followed by a multi-day visit to Baghdad and Erbil, starting on Sept. 5, by Assistant Secretary of State for Near Eastern Affairs Barbara Leaf, who conveyed the same message. How much this sudden surge of U.S. interest can influence the political trajectory on the ground in Iraq is uncertain. Events are primarily defined by local actors’ cost-benefit calculi and are not easily influenced by outside interventions — especially not by the U.S., which has been, politically speaking, missing in action in Iraq.

Iran also sought to intercede by trying to strip Sadr of his religious legitimacy through an intervention by Grand Ayatollah Kazim al-Haeri. On Aug. 29, while unprecedentedly announcing his retirement from religious office due to old age, Haeri harshly criticized Sadr’s actions, thus prompting the latter to publicly withdraw from politics. Prior to his assassination in 1999, Muqtada al-Sadr’s father had designated Ayatollah Haeri, who has resided in Iran since the 1970s, as his religious successor and, as such, the marja’ (religious authority) for the younger Sadr himself and a large portion of the Sadrists. Sadr implied in his withdrawal statement last week that he believed Haeri’s remarks and decision to step down were made under pressure from the Iranian government. While Tehran has a large footprint in Iraq, the present political crisis among Iraqi Shi’as has forced the Islamic Republic to come to terms with the fact that there are limits to its ability to control its Arab neighbor. Iran’s maximalist aim remains to ensure a united Shi’a front inside Iraq. But the Sadr “rebellion” is a challenge it is finding difficult to contain.

Meanwhile, Iraqi Prime Minister Kadhimi has already convened two dialogue sessions that were attended by the president, the speaker of parliament, and the leaders of major political factions; but Sadr boycotted both sessions. Still, at the second session, on Sept. 5, the participants agreed to form a technical committee that would establish a roadmap on holding early elections (a Sadrist demand), and to formulate proposals concerning reforms of the election law and the Independent Higher Election Committee (as called for by the CF).

Where is Iraq heading? For now, the political climate remains tense, with both competing sides ready to again resort to arms. They each view this conflict in existential, zero-sum terms and think their side has won the latest confrontation. Both are now stuck in a stalemate, however, where neither side is able to impose a solution to end the political conflict.

Sadr’s show of force, bringing hundreds of thousands into the streets and withdrawing them at a moment’s notice, was not only an indication of the size and blind loyalty of his followers but also his command and control over them. In turn, the CF proved willing to respond using every means at its disposal — paramilitary and/or legal. Regarding the latter, the Aug. 2 ruling by Iraq’s Federal Supreme Court (FSC), which states that a quorum to elect the president requires two-thirds of the total number of members of parliament, notably suggests potential collusion between the FSC head and the CF.  This judicial decision made it technically difficult to select a head of state and consequently for Sadr and his Sunni and Kurdish allies to form a majority government since the president constitutionally names a prime minister.

On Sept. 7, the FSC issued its ruling on a case submitted by the Sadrists to dissolve the legislature. The FSC declared that the dissolution of the Council of Representatives is in the parliamentarians’ hands and harshly rebuked the legislators for placing their interests and those of their respective political parties above the interests of the people they were elected to represent. This means that the current political stalemate is unlikely to be resolved through a judicial intervention.

Going forward, the post-Arba’een period will likely witness an increase in communal violence, including a campaign of mutual assassinations to settle old scores as well as to increase the costs to their opponents of continuing with this deadlock.

Whether Prime Minister Kadhimi can bring the dialogue to a successful conclusion is debatable. Unless Sadr agrees to join the talks, they will go nowhere; and so far, he has refused to do so. Simultaneously, Sadr’s strategy to reject any dialogue with his opponents unless they agree to his demands — if, indeed, this truly is a strategy rather than simply a series of emotive and instinctive decisions on his part — will at some point start to show diminishing returns.

The Marja’iyah, the body of top Shi’a religious authorities, has proven on numerous occasions an unwillingness to mediate political conflicts. Only when such conflicts threaten civil peace have these clerics intervened and managed to force all parties to step away from the brink. Nonetheless, there is no equally respected external mediator who might be able to step in and guide the opponents toward a compromise solution. The current crisis is, therefore, here to stay until the Iraqi leaders can come to a compromise solution among themselves. The short-term challenge will be to prevent this political turmoil from spiraling into an all-out civil war.

﻿Randa Slim is a senior fellow and the director of the Conflict Resolution and Track II Dialogues Program at the Middle East Institute. The opinions expressed in this piece are her own.

An excerpt from this piece appeared in the Weekly Briefing earlier this week.