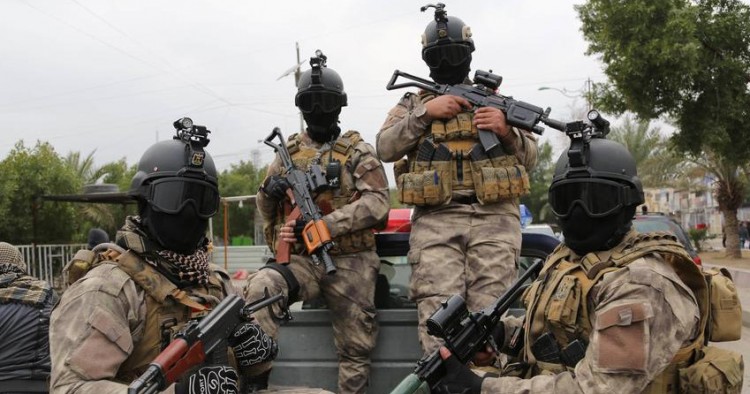 In a recent video circulating on Iraqi social media, a man appears to be showing off rows of militiamen in the background as they conduct combat drills. He begins by giving an overhead view of several fighters of the Imam Ali Brigade, an Iranian-supported militia group within Iraq’s Popular Mobilization Force (PMF), marching in formation as they receive training. Before concluding the clip, he declares “Ila al-Yaman Insha’llah” (to Yemen, God willing). This is not the first time that militias under the PMF umbrella voice their willingness to join Houthi militants in Yemen. At a press conference earlier this year, the secretary general of Kata’ib Sayyid al-Shuhada, another Iran-linked PMF group, publicly volunteered to join the ranks of Houthi leader Abdul Malik al-Houthi, stating that “I will be wherever master Abdul Malik al-Houthi needs me to be.”

Comment: Kata’ib al-Imam Ali, formed in the summer of 2014, is the armed wing of the Iraqi Islamic Movement. The brigades’ secretary general, Shibl al-Zaidi, was formerly in the ranks of Muqtada al-Sadr’s Mehdi Army, and allegedly one of its most vicious fighters. Kata’ib al-Imam Ali is estimated to have about 7,000 men in 40 combat groups. Like many other Shiite militias within the PMF, Kata’ib al-Imam Ali is closely associated with the Islamic Revolution Guards Corps (IRGC). It receives Iranian funding, training, weapons, and intelligence support. Its leaders openly pledge allegiance to Iran’s Supreme Leader Ali Khamenei. Al-Zaidi has been seen multiple times with Iran’s Quds Force commander Qassem Soleimani.

Several investigations by the United Nations and the U.S. military have shown that the Quds Force, the elite branch of the Islamic Revolution Guards Corps (IRGC) responsible for external operations, has provided support, including lethal weapons, to the Yemeni Houthi rebels. Last week, U.N. arms experts boarded a U.S. vessel to investigate whether more than 2,500 AK-47 rifles en route to Yemen seized by the U.S. originated from Iran.  Thus, the involvement of Kata’ib al-Imam Ali in Yemen raises further concern that the IRGC may use its Iraqi Shiite militia allies in Yemen and potentially other regional conflicts as the fight against ISIS in Syria and Iraq is coming to an end. Soon after Kata’ib al-Imam Ali was founded, they appeared in Syria to fight alongside the Assad regime. They never shied away from publicizing their violence by posting videos and pictures of their feats, victories, and decapitations à la ISIS.

Yemen has experienced appalling violence since the outbreak of the civil war in 2015, exacerbated by the involvement of regional and international stakeholders, mainly the Saudi-led coalition and Iran. The presence of different militant and terrorist groups – including an armed secessionist movement (the Southern Movement), the al-Qaeda in the Arabian Peninsula (AQAP), and a religio-political sectarian movement (Houthi rebels) have hindered international efforts to foster a political settlement to the end the war. Kata’ib al-Imam Ali’s entrance into the Yemeni combat scene could be detrimental to Yemen’s already brittle national unity: it will further reinforce ethno-sectarian nationalism and diminish efforts for national reconciliation.