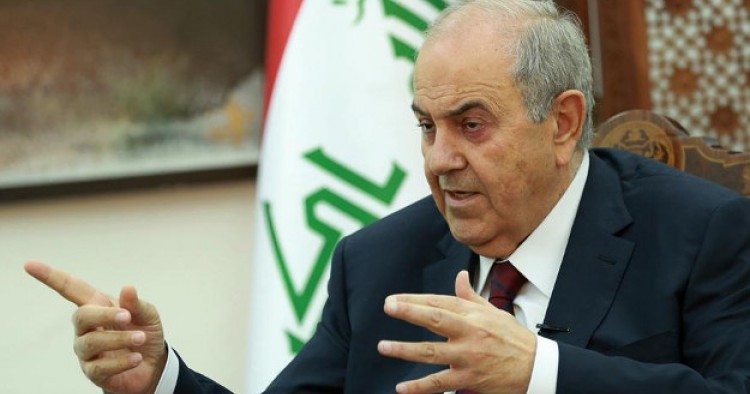 Iraq’s Vice President Ayad Allawi has called on Iran to stop interference in the Iraqi internal affairs, Fars News Agency, which is affiliated with Iran’s Revolutionary Guards, reported. “Iran does not have the right to meddle in the Iraqi affairs and I hope that [Iraq’s] relations with Saudi Arabia will be strategic,” the Iraqi politician was quoted as saying in an interview with an Iraqi TV. Allawi said political polarization and sectarian divide in Iraq led to the rise of ISIS in 2014 and emphasized the need for reconciliation in the war-raved country to ensure long-term stability. Separately, the Iraqi vice president welcomed the Baghdad government’s decision to lift the international flight ban on the Kurdistan Region airports as a positive step, and expressed the hope that Baghdad and Erbil take further measures to resolve other outstanding disputes.

Comment: Ayad Allawi, a secular Shiite politician and former prime minister, has been a fierce critic of Iran’s meddling in Iraq for years. He has repeatedly spoken against Tehran’s support for sectarian Shiite militia groups in Iraq and has alleged that Tehran is seeking to manipulate the upcoming Iraqi parliamentary elections in favor of its preferred candidates. In contrast, Allawi supports the Iraqi government’s efforts to improve relations with regional Arab states.

Allawi’s strong anti-Iran remarks also reflect the diversity of the Iraqi Shiites’ politics. Despite the conventional wisdom, a majority of Iraqi Shiites, including ones who favor a friendly relationship with Tehran, oppose Iranian interference in their country. While several prominent Iraqi politicians and commanders of Iraq’s Popular Mobilization Forces have close ties with Tehran, other Shiite nationalist leaders reject Iran’s meddling.