The IRGC and Iran’s “Water Mafia” 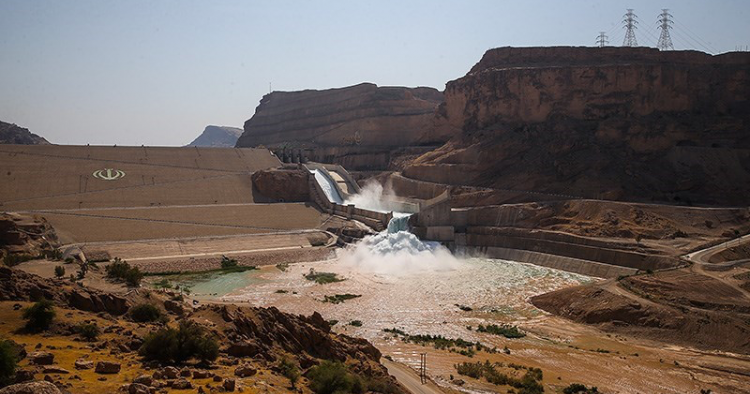 Several weeks ago, Saeed Mohammad's name made the rounds as a possible candidate for Iran’s upcoming presidential election in June. Observers started looking into the past of the relatively unknown general, who was the former head of dam building firm Sepasad and now serves as the chief of Khatam al-Anbiya Construction Headquarters. The rather young general, who likes to be called Dr. Mohammad, has connections to reformists and conservatives with deep pockets and powerful allies. With some reformists calling for a new military leader to run after the term of the current president, Hassan Rouhani, comes to an end, some might say he should consider himself lucky to be in the right place at the right time.

Mohammad’s potential candidacy raises some immediate questions as well. The first one that comes to mind is how does a dam builder come into the picture in the first place? Iran has been hit hard by a devastating water crisis and some conservative political operatives see him, as the head of the country’s largest construction firm, as someone who can solve problems — a relatively young general who the supreme leader trusts.

The next question that arises is what exactly does the Islamic Revolutionary Guard Corps (IRGC), which is known for intervening in regional politics, sending fighters to Syria and Iraq, and threatening international shipping in the Persian Gulf, have to do with water management? After the fall of the shah in 1979, the IRGC was created to protect and export the Islamic revolution. In the years since it has evolved into a significant military and financial player in its own right. Khatam al-Anbiya, its construction arm, gets funding from the government for all kinds of major building projects, including oil and gas and petrochemical plants, dams, tunnels, and water transfer schemes. The IRGC’s tentacles now extend almost everywhere in Iran and it can force the administration to continue giving it bigger and more expensive projects. A large part of the country's budget goes to water management projects, which are endless. From dam construction to water transfer schemes, the IRGC knows that it will forever control a significant portion of the national budget, and it protects its business interests using its intelligence organization. At the end of the day, it’s all about power and authority.

How the IRGC got involved in construction

During the 1980-88 Iran-Iraq War, some commanders with a background in construction started an engineering corps within the IRGC and became active in building bridges, roads, and trenches for the Basij militia and the Guards fighting on the front lines. Following the signing of the cease-fire in 1988, the members of the IRGC corps of engineers found themselves with little to do until the passing of Ayatollah Ruhollah Khomeini and Akbar Hashemi Rafsanjani’s election as the new president. During the transition period and the start of Rafsanjani’s reconstruction drive, Iran’s new supreme leader, Ali Khamenei, ordered the creation of an IRGC construction firm, Khatam al-Anbiya. It was a win-win move. The government needed help carrying out its major construction projects, while the IRGC needed an objective and projects to keep war veterans occupied.

Reconstruction was impossible without new water resources and Rafsanjani, an avid student of the Chinese development model, was a fan of the mega-dams built by the Chinese military. Rafsanjani knew that the followers of the late Ayatollah Khomeini, including the Guards, supported the ayatollah’s quest for Iranian self-sufficiency. In the early 1980s, ministers and officials promised Khomeini that they would build water structures all over the country to boost cereal production, completing projects that had been designed before the revolution.

Aware that a picture is worth a thousand words, Rafsanjani knew that images of the inauguration of a 400-foot-high structure like a dam would be seen as a true sign of success. He wanted to capture a moment like Franklin D. Roosevelt at the Hoover dam or Gamal Abdel Nasser at the site of the Aswan dam.

All of this led to the creation of Khatam al-Anbiya’s dam-building arm, Sepasad, in 1992. The name comes from the combination of the Persian words for “corps” (Sepah) and “dam” (Sad). In the following years, the IRGC was able to obtain significant contracts and became an important economic player by pursuing the Chinese construction model. Keen to follow in Deng Xiaoping’s footsteps, Rafsanjasni wanted to become the champion of post-war reconstruction, enabling him to control the IRGC by creating new opportunities for war veterans and boosting his popularity in the eyes of the people.

The rise of the “Water Mafia”

Sepasad became involved in major projects such as the Karkheh and Gotvand dams in Khuzestan Province, an area hit hard during the war and in dire need of assistance. It partnered with a prominent consulting firm close to the regime, Mahab Ghodss, and together they started lobbying members of Parliament to push the government to build more dams. Mahab Ghodss designed and oversaw the dams, while Sepasad served as the contractor. Gradually, these two powerful bodies became the core of what is now known as Iran’s “Water Mafia,” an entity that pushes for and wins projects, spreads the wealth among a small group of members, and does not tolerate any efforts to monitor or audit its activities. This is how the cost of building a dam like Gotvand can increase from $1.5 billion to $3.3 billion, and nobody even dares to ask where all the money has gone when the contractor did such a poor job.

The Gotvand dam is an excellent example of the coordinated corruption and modus operandi of the Water Mafia. Iran’s Water and Power Resources Development Company, run by reformists like Habibollah Bitaraf and Vafa Tabesh, handed the project to Mahab Ghodss and Sepasad. Though geologists had warned them about a huge salt outcrop that was part of the Gachsaran formation where the dam was to be built (see image below), officials decided to proceed with construction anyway, without notifying the public that doing so could increase the salinity of the Karun River. Any prudent engineer would have refused to build a dam in a location where a multimillion-ton mass of salt would be part of the reservoir.

After a few experts disclosed the problem, work was delayed. But Saeed Mohammad came to rescue and with the help of Mahab Ghodss claimed to have found a solution: “covering the salt bulge with a blanket of clay.” The project was completed and officials cheered. However, within just a few days of the dam’s opening ceremonies, the clay blanket had been washed away and millions of tons of salt dissolved. The lower part of the lake became so salty that the government would have to spend hundreds of millions of dollars to get rid of the salty brine. Even now, 10 years later, it still has not been able to find a solution.

The IRGC and its partners have long silenced any criticism of their dam projects, but the reformists have also done the same too. Cost-benefit assessments have not been made public, and one administration after another has approved the development of these mega-structures. In 2001, I wrote a couple of op-eds criticizing the construction of dams that had a negative environmental impact. President Mohammad Khatami subsequently summoned me to speak with him. I used the opportunity to brief him on major water management projects and told him about other significantly cheaper viable solutions in arid and semi-arid parts of the country. Several weeks later, however, I was banned from writing anything about the dams.

The water projects continue to this day and there are currently plans to dig a system of tunnels to transfer water from the Karun basin to the central Iranian plateau, where water is scarce. This is itself partially due to the Islamic Republic’s own water management policies, which have drained the aquifers in an effort to realize the dream of Iranian self-sufficiency espoused by its leaders. As a result, many experts now see the IRGC as an environmental menace willing to destroy Iran’s water resources just to line its own pockets.

The government currently owes more than a billion dollars to Khatam al-Anbiya, while the former head of Sepasad, who oversaw the completion of the ill-fated Gotvand dam, is now considering a run for president. While he might have money and the support of the powerful, the outcome of the election may be in question if more voters find out about his disastrous track record and history of environmental mismanagement.

Nik Kowsar is an award-winning Iranian-Canadian journalist and water issues analyst. The views expressed in this piece are his own.