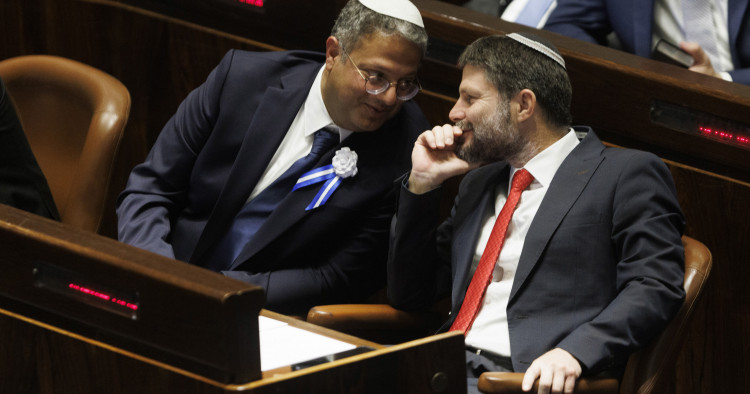 The Israeli election results — and in particular, the return of Benjamin Netanyahu as prime minister with the support of 14 seats secured by the Religious Zionism (RZ) slate — have prompted considerable expressions of concern among liberal Israelis and Western analysts.

Alarmed by the prospect of RZ lawmakers Bezalel Smotrich and Itamar Ben-Gvir — the latter as head of the Otzma Yehudit (“Jewish Power”) party — being granted ministerial posts in the next cabinet, some have reacted with dramatic declarations that the Israel “they knew” is no longer.

Others, however, have sought to downplay the idea that the elections in and of themselves represent a seismic shift. This approach emphasizes the narrowness of the gap in the popular vote between the “pro-Netanyahu” and “anti-Netanyahu” blocs, as well as the “wasted” votes that went to two parties that failed to make the threshold for parliamentary representation, Meretz and Balad.

In fact, both of these approaches get something right and get something wrong. Put simply, the success of Ben-Gvir, a politician who proudly describes the late extremist Rabbi Meir Kahane as his “teacher,” is not a cataclysmic shift — it’s worse than that.

The key to unpacking this is understanding just how much the “pro-” or “anti-”Netanyahu division has dominated Israeli electoral politics over the last few cycles — a fault-line that has come to define the Knesset in simplistic terms of two blocs, collapsing some differences and exaggerating others.

The lack of clarity is compounded by the fact that, for some journalists and pundits, the “pro-Netanyahu” and “anti-Netanyahu” division has become synonymous with “right” and “left” (or vice versa). Such a conflation is then the basis for misleading claims about the supposed narrowness of the “right’s” victory over the “left.”

On Twitter, Haaretz’s Noa Landau highlighted the roughly 30,000 votes between the Netanyahu bloc and the anti-Netanyahu bloc. Sharing the tweet approvingly, former Israeli diplomat Arthur Lenk described the election as a “virtual tie,” adding that “the fascist bloc can certainly be defeated.”

Another former diplomat, Alon Pinkas, used the votes lost by Meretz and Balad to argue that the “center-left” had actually beaten the “right-religious” in terms of the popular vote. Yet this was a “center-left” including the likes of right-wing nationalists Gideon Sa’ar and Avigdor Lieberman.

This analytical mess has obscured a state of affairs of far more significance than the fate of Netanyahu — namely, the overwhelming domination in the Knesset of parties that reject Palestinian sovereignty in the occupied territories and support variations of the apartheid status quo.

For illustrative purposes, consider what an Israeli government without RZ would look like. Indeed, some have urged the Israeli opposition to support the quashing of Netanyahu’s legal proceedings in return for keeping Ben-Gvir out of the next government. Imagine the sighs of relief! All would be well again. But does anyone seriously imagine that such a government would do anything other than continue to perpetuate military occupation and apartheid, consolidate and expand settlements, and displace Palestinians?

Or suppose that Meretz and Balad had met the threshold and an anti-Netanyahu coalition was forged. What then? One does not need to speculate about what an “anti-Netanyahu” bloc would do in government, because one just held the reins of power for 18 months. That Israeli government, including Yesh Atid, Labor, Meretz, and the United Arab List (Ra’am), expanded illegal settlements, pursued the expulsion of Palestinians in Masafer Yatta, criminalized Palestinian human rights organizations, launched a “pre-emptive” and devastating assault on the Gaza Strip, and oversaw the highest Palestinian death toll in the West Bank since the Second Intifada.

Such a list cannot be mitigated by accusations of “selectivity.” It’s actually an incredibly dire record for such a short-lived coalition. This was, to all intents and purposes, a right-wing government with respect to the Palestinians. Its promises of “shrinking the conflict” and economic concessions looked an awful lot like a rehashed version of what Likud laid out in its 2009 platform: no Palestinian state but improve the daily lives of Palestinians. Of course, not every Israeli government has identical policies vis-à-vis the Palestinians. Ultimately, however, there are only so many ways to package apartheid in the rhetoric of “autonomy.”

None of this should be a surprise to anyone paying attention.

For example, Yair Lapid’s ostensibly centrist Yesh Atid party backs a “two-state solution” but whose parameters include a “united Jerusalem” as Israel’s capital, the annexation of “settlement blocs” of an unknown number and size, and the right of the Israeli military to invade the Palestinian “state” at will. Whereas, the declining Labor party’s platform promotes “separation” from the Palestinians, and commits merely to a “future” implementation of a “two-state solution” (again, with a vague reference to settlement blocs).

The so-called Israeli “center” is not itself a coherent or uniform ideology. The parties in question have both shared and distinct features. But with respect to the Palestinians, the Israeli “center” is right-wing, nationalistic, and committed to a variety of positions at odds with international law.

The harsh reality is that in the new Knesset, there will only be 10 lawmakers — out of 120 — whose parties (the Democratic Front for Peace and Equality, or Hadash, and Ra’am) are committed to ending military occupation and realizing Palestinian sovereignty.

There is no reason to expect this to change anytime soon, particularly given the trends in Israeli public opinion. A strong majority, 62%, of Jewish Israelis identify as “right-wing.” This rises to 70% among the youngest segment of the electorate, in part influenced by developments among religious Zionists, and when it comes to younger Haredim (ultra-Orthodox).

Surveys consistently show that Jewish Israelis rank the Palestinian “issue” as of far less importance than the economy and cost of living. In polling ahead of the election, just 31% of Jewish Israelis said that the next government should try to advance “two states for two peoples.”

Over the years, recognition of clear, long-term, and structural developments in how the Jewish Israeli electorate votes has been neglected, glossed over, or lost behind reactions to electoral cycles. Time after time, yesterday’s “extremist” becomes the “relative moderate” in comparison to the new extremist. From the election of Ariel Sharon in 2001 (“Israel’s dark hour”), and the emergence in 2009 of Avigdor Lieberman as kingmaker (“A toxic force rises in Israel”), to Netanyahu’s 2019 win (“life is about to get worse for Palestinians”), and now Ben-Gvir’s surge: the cycle repeats again. What in other contexts would be seen very clearly for what it is, remains — for some — unseen, or denied.

The pro/anti-Netanyahu paradigm — which routinely serves as a crude substitute for “right” versus “left” — has helped delay a reckoning and a fork in the road for a host of constituencies. An Israeli cabinet that includes Ben-Gvir and Smotrich, by contrast, will accelerate such a process. There are many for whom “liberal Israel” is a cherished idea or part of what informs or justifies diplomatic policy: from a moribund “two-state solution” framework to opposing efforts to hold Israel and Israeli officials to account in international fora. They will face a reality much harder to ignore. The tension between the imagined and actual Israel could reach a breaking point.

Some will undoubtedly respond to these developments by doubling down on the response long offered to voices calling for Israel to face accountability for its violations of international law and human rights. Namely, they will claim, measures routinely used against other such violators would, in Israel’s case, merely “strengthen the hardliners.”

If it hasn’t already, the latest election demonstrates just how wrong-headed this is; it is in fact in the context of impunity that ultra-nationalism and hard-right extremism have flourished. While international, civil society-based campaigns like Boycott, Divestment, Sanctions have grown year on year, Western governments have supported or effectively incentivized settlement expansion, home demolitions, or racist legislation by insisting on a “carrots and no stick” approach to relations with Israel instead of allowing it to feel the consequences of its own actions.

One predictable consequence of a Likud-RZ-led government will be an expansion of illegal settlements. Yet thousands of settlement housing units were also approved under the Lapid-Bennett “change” coalition (including in Kedumim, the settlement where Smotrich lives, in the heart of the West Bank).

The point here is not whether the new government will be the “same” as the outgoing one. It is highly likely, of course, that Ben-Gvir and Smotrich will seek to advance various goals pertaining to accelerating settlement expansion, demolishing Palestinian homes, using live fire against unarmed protesters, and even formally annexing some West Bank territory. The salient point, rather, is that there is an almost consensus opposition to Palestinian self-determination and the norms of international law among Israeli political parties — a consensus that is reflected in government policy regardless of coalition makeup.

The settlement enterprise, for example, has been initiated, developed, and grown by every single Israeli government and prime minister since 1967. More than a “practical obstacle” to a “two-state solution,” settlements and their infrastructure have always been a declaration of intent and expression of rejectionism.

Ben-Gvir is, in his own way, an expression of this same rejectionism of Palestinian self-determination and sovereignty. But as repeat election results, polling, and facts on the ground so clearly demonstrate, it would be a huge mistake to see Ben-Gvir or the next Israeli government as either a major rupture or simply the regrettable product of a few thousand wasted votes.

Ben White is a writer, analyst, and executive director of The Britain Palestine Media Centre. He is the author of four books, including Cracks in the Wall: Beyond Apartheid in Palestine/Israel (Pluto Press, 2018).