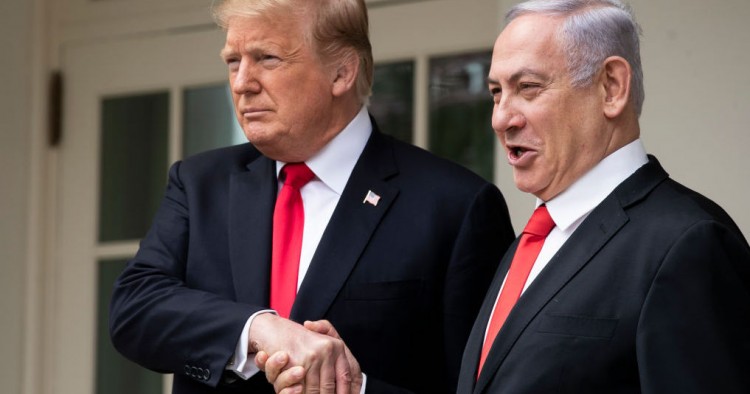 The upcoming visit to the White House by Israel’s caretaker prime minister has nothing to do with the Middle East conflict and everything to do with giving yet another political favor to Benyamin Netanyahu.

While the Jan. 28 visit may be all about the Israeli elections, it is shameful and dangerous for American officials to be giving time and space for discussions that affect the Palestinian people without their involvement.

Israel’s right-wing leader, who is facing a trial on corruption charges in three separate cases, is looking for ways to secure a governing coalition in the March 2 elections and then convince a majority of Knesset members to grant him immunity from prosecution because he is so important for Israel. To do that Netanyahu has decided to offer Israelis a political bribe: the annexation of parts of the Occupied Territories — namely the Jordan Valley and north Dead Sea. Netanyahu knows that he needs U.S. support for his intended move and he is traveling to Washington to seek it. But giving Netanyahu what he wants would again violate the most important post-World War II understanding between the countries of the free world. This was best articulated in the preamble to UN Security Council Resolution 242, which states that it is inadmissible to acquire land through war.

Israel has long coveted Palestinian lands, and in the 1993 Declaration of Principles between the Palestine Liberation Organization (PLO) and the State of Israel, witnessed by the U.S., Israel laid out a transitional plan that included, in the first stage, declaring 60 percent of occupied Palestinian lands as Area C, over which Israel had total security and administrative control. Palestinians were told that this would change as a result of the permanent status negotiations, and sure enough two of the five areas for negotiations were set to cover borders and settlements. The planned five-year transitional period has turned into a quarter of a century, however, and the promise of a solution first killed by a Jewish radical who ended the life of Yitzhak Rabin has now become fodder for a further Israeli land grab. The Trump administration’s decisions, in violation of international law and UN Security Council resolutions, to move the U.S. embassy to Jerusalem, recognize Israel’s annexation of the Golan Heights, and stop using the term “occupation” have whetted Israel’s appetite for further land grabs that could finally end the possibility of a two-state solution.

But what is most disheartening is the fact that Washington continues to allow Israelis as well as Israelis and Americans to negotiate internally over Palestine’s eventual future. This is shameful and reflects a racist presumption of superiority for Israel and a colonial attitude that, somehow, white Christian Zionist Americans and Israeli Jews know what is best for Palestinians. What might be even worse is that both Americans and Israelis know that what they are doing is not fair, but they are doing it anyway — in an effort to bring Palestinians to their knees so that they will sign their own surrender in a pro-Israeli deal.

The corruption of U.S. foreign policy, currently on display in the Senate impeachment trial, has become clear for all to see. What President Donald Trump is doing by hosting a leader of a foreign country indicted in multiple cases of corruption and advocating an illegal act in violation of international law should not go unnoticed or unchallenged.

Whether the visit is being held solely for internal Israeli political reasons or not, the very fact that it is taking place under the presumption of a U.S. green or even yellow light for annexation is detrimental to the prospects for regional peace and U.S. international interests, and is a huge blow to America’s loyal Arab allies, including Jordan and Egypt. The latter have peace treaties with Israel and continue to hold firm to the Arab Peace Initiative, which calls for total normalization of relations with Israel in return for an end to the occupation of lands seized in 1967 and a just and agreed to settlement of the Palestinian refugee problem.

Any deviation from accepted international norms on this front will have a negative long-term impact on the volatile situation in the Middle East. It is high time to keep Palestine and Palestinians out of Israeli and American electioneering and focus instead on a genuinely inclusive process that can bring about an independent and democratic Palestinian state alongside a safe and secure state of Israel. Any steps away from this approach will not pass and will only aggravate the situation in the region.

Daoud Kuttab is an award-winning Palestinian journalist and former Ferris professor of journalism at Princeton University. Follow him on twitter @daoudkuttab. The views expressed in this piece are his own.