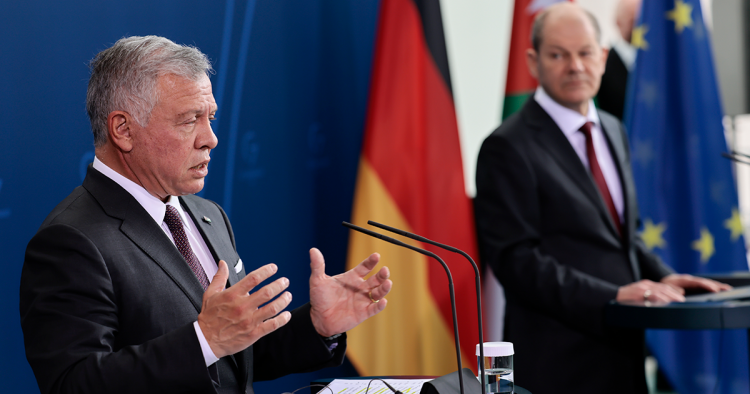 In spite of Jordan’s close ties to the United States and Europe, Amman has found itself walking a diplomatic tightrope in the wake of Russia’s invasion of neighboring Ukraine in late February. The initial reaction by Foreign Minister Ayman Safadi, two day after the invasion, was to call for a political solution to the crisis in Ukraine, without any mention of Russia. In fact, Jordan’s immediate concern was to organize the evacuation of more than 1,700 Jordanian students studying in Ukraine.

And while Jordan could not but vote against Russia in the U.N. General Assembly on March 2, Jordanian diplomacy avoided any mention of Russia as the aggressor in the conflict. In a visit to Berlin on March 15, King Abdullah said that Jordan follows with deep concern the crisis in Ukraine, and reaffirmed the importance of respecting the sovereignty, independence, and territorial integrity of states. At a press conference with German Chancellor Olaf Scholz, the king said that Jordan is working to facilitate the arrival of Ukrainians seeking to reunite with relatives in the kingdom, including waiving all visa requirements.

Speaking about the potential impact on the Middle East peace process, he later added that, “We will continue to all work together to be able to move forward, and whatever is going on in Ukraine, I don’t think affects the vision of the leaderships in our part of the world to try and solve this issue and move it forward.” That would be the most that any Jordanian official would say about the war in Ukraine.

On April 2, the U.S. State Department said that Secretary of State Antony Blinken spoke with Safadi, who was in New York, to reaffirm the deep strategic relationship between the United States and the Hashemite Kingdom of Jordan. It added that the secretary thanked the foreign minister for Jordan’s steadfast support for Ukraine, especially in the United Nations.

While Jordan cannot publicly assume neutrality over the crisis, it seems that this is what its diplomacy is hoping to achieve. But the longer this war continues, the more pressure there will be on Amman to make its position clearer.

The irony is that other regional U.S. allies have already distanced themselves from Washington’s position on Russia with limited political damage. The leaders of Israel, Saudi Arabia, the United Arab Emirates, and Egypt have all made direct calls to President Vladimir Putin since the war began, but not Jordan.

That’s surprising because King Abdullah is the Arab leader who has met Putin the most over the past 20 years. While he remains one of America’s closest allies, since ascending to the throne in 1999, the Jordanian monarch has also built a close working relationship with Putin. In doing so he had hoped to create a counterweight to America’s tight grip over the Middle East peace process, which was going nowhere.

But Jordan’s ties to Moscow grew even stronger following the Russian military intervention in Syria in 2015, which the king was quick to applaud. In Jordan’s view Moscow’s decision to step in would check Turkey’s incursion in northeastern Syria and the expansion of pro-Iranian militias, especially in southern Syrian close to the Jordanian border. Moreover, it would also prevent a jihadist takeover of Damascus, which would have led to the emergence of a radical militant regime next door to Jordan. And finally, Jordan had reached a point where it could no longer welcome Syrian refugees.

The king’s close ties to Putin had helped in negotiating a de-escalation zone in southern Syria in 2017, an effort in which Washington was also involved. Under that understanding Moscow would ensure that pro-Iran Hezbollah fighters stay as far as possible from the Jordan-Syria borders. Later Moscow would support the king’s decision to re-establish contact with the Assad regime, open the borders, and host key Syrian ministers in Amman.

After returning from his first visit to the Biden White House last July where he suggested a step-by-step approach to distancing Assad from Iran and rehabilitating the Syrian regime, an idea previously discussed with the Russians, King Abdullah flew to Moscow for further talks with Putin. He had also suggested supplying energy-starved Lebanon with Jordanian electricity and Egyptian gas through Syrian territory — a proposal that Washington approved, although it now appears frozen over regional concerns about U.S. sanctions.

The Russian invasion of Ukraine took Jordanian diplomacy off guard, however. Jordan has much at stake in maintaining relations with Putin, especially where Syria is concerned. Despite its closer ties with Russia, Jordan is becoming increasingly dependent on U.S. financial and military aid and unlike Egypt, Saudi Arabia, and the UAE, it lacks the geopolitical assets that give these countries a greater degree of diplomatic maneuverability.

The king is scheduled to travel to Washington sometime in May and while he is there he will be pressed to make Jordan’s position on the war in Ukraine much clearer. Amman certainly hopes that the crisis will be over by then. In the meantime Jordan trusts that the U.S. administration will appreciate its delicate position and its need to protect its interests, especially with regard to its understandings with Russia over southern Syria, where the security situation has continued to deteriorate.

Meanwhile, Foreign Minister Safadi travelled to Moscow on April 4 as a member of the Arab League’s ministerial delegation that will also go to Warsaw to meet Ukrainian officials. Jordan hopes that a “balanced” pan-Arab position on the war will give it the diplomatic cover to stay its present policy course — at least for now.