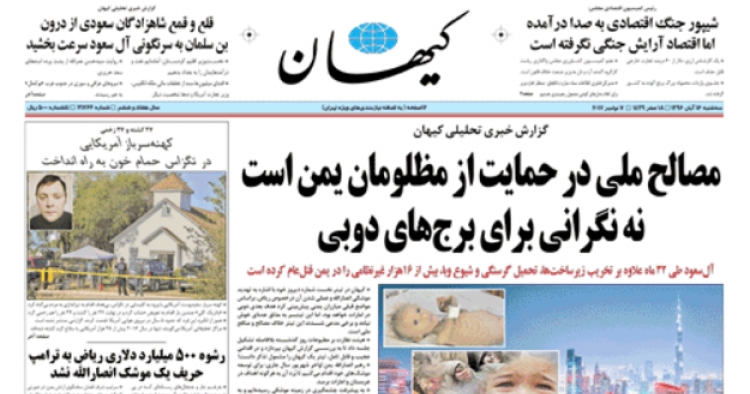 The Houthi missile attack against King Khalid International Airport in Riyadh on Saturday not only heightened tension between Saudi Arabia and Iran, but also triggered a war of words between media outlets representing different factions in the Islamic Republic.

“Ansarullah Launches Missile against Riyadh. Next Target: Dubai!” read the paper’s November 6th front-page headline. “It is now the Yemeni revolutionaries who decide the next target for long-range ballistic missiles. Riyadh, Jeddah, Ta’if and ARAMCO may be targeted, but Ansarullah may also turn the tip of the missile toward the fancy glass harbor  of Dubai!”

Kayhan’s article provoked strong reactions within the Iranian press and beyond.

Reformist Bahar’s front-page article sarcastically praised Kayhan for creating the greatest “masterpiece” since the January 2, 2016 attack on the Saudi diplomatic missions in Iran, and asked: “Why do radicals insist upon acting against national security?” Davoud Hermidas-Bavand, political scientist, used his column in Etemad – previously associated with Mehdi Karrubi, 2009 presidential candidate currently under house arrest - to warn against “uncalculated moves,” and expressed his “wonder and concern” over “the front-page of an influential newspaper in the capital.” Criticism of Kayhan’s editorial was not limited to newspapers: Seyyed Ala al-Din Zohourian, Press Monitoring Committee secretary, said Kayhan had received a “warning” for its piece, which was deemed “contrary to national interests and security.”

But the criticism and warning did not deter Kayhan. Its November 7 headline was as inflammatory against the United Arab Emirates and Saudi Arabia. “Supporting Innocent Yemenis Is National Interest. Being Concerned about Towers of Dubai is Not!” The conservative outlet further editorialized: “Firing of a missile against Riyadh International Airport can change the Saudi calculations… The Saudis may increase their attacks against cities in Yemen, but they will certainly change their adventurism when they discover people who live in glass houses can’t throw stones.”

Remarkably, Iran, the official mouthpiece of President Hassan Rouhani, has chosen to remain silent in the public row over Kayhan’s hardline statements toward Saudi Arabia and its allies.

For now, the I.R.G.C. and the technocratic elites of the Islamic Republic, respectively represented by Jafari and Rouhani, seem to agree on the gravity of the latest crisis between Iran and Saudi Arabia sparked off by the missile launch. The weak and outdated state of the Islamic Republic Air Force, and limited air defense capabilities provide Iran with poor prospects in the case of a direct military confrontation with the combined modernized forces of Saudi Arabia and United Arab Emirates Air Force.

However, as Kayhan – possibly with implicit consent of Khamenei – fans the flames of war, the I.R.G.C. leadership may find it difficult to resist adventurism. But any I.R.G.C. actions against Saudi Arabia and its allies are most likely to come from Iran’s regional proxies.