Khamenei Urges Visiting Iraqi Leader not to Rely on America 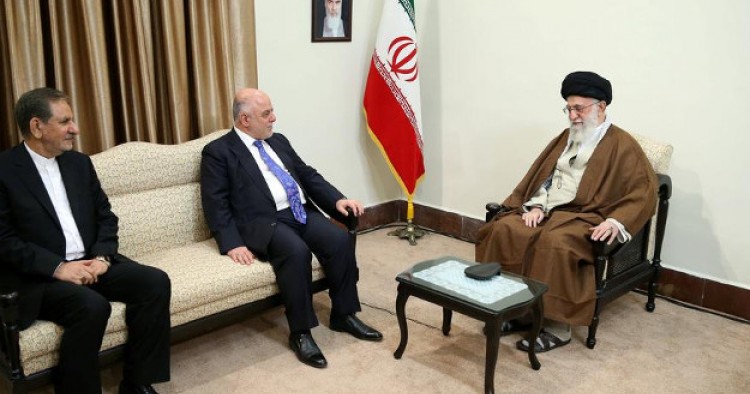 Iran’s Supreme Leader Ali Khamenei told visiting Iraqi Prime Minister Haider al-Abadi today in Tehran that he should not trust the United States as a reliable partner in the fight against terrorism, the Iranian media reported. “The Americans themselves created Daesh [Islamic State]. But now that the terrorists are defeated by the Iraqi government and people, they pretend to be supportive and helpful. There is no doubt that they will harm Iraq again whenever there is an opportunity,” Khamenei reportedly told the Iraqi leader. The supreme leader praised Abadi for backing the establishment of “comprehensive relations” between Tehran and Baghdad but cautioned him against relying on Washington. The Iraqi prime minister reportedly thanked Iran for supporting Iraq in the fight against terrorism and emphasized that his government “will enthusiastically make efforts to expand our relations with the Islamic Republic of Iran.” Abadi also assured Khamenei that the Iraqi government will not allow the partition of the country – referring to Iraqi Kurdistan region’s latest push for independence.

According to the Iranian press, Rouhani reiterated Tehran’s commitment to helping the Iraqi government and people to defeat terrorism and preserve the country’s territorial integrity. Furthermore, the Iranian president stressed that Tehran is keen to play a major role in Iraq’s reconstruction and economic recovery as the fight against the Islamic State is ending. “Boosting banking relations between the two countries in order to expand and facilitate bilateral trade and economic ties and easing visa issuance procedures are needed to enhance relations between the people and governments of the two countries.”

Shahroudi, who was born in the Iraqi holy city of Najaf and is a potential candidate to succeed Khamenei, credited the Iraqi government and people as well as the Popular Mobilization Forces (P.M.F.) for preserving Iraq’s national unity. Echoing Khamenei’s remarks, Shahroudi also advised Abadi against trusting “the enemies because they are behind all conspiracies against the Iraqi nation – be it Daesh, the plot to divide Iraq, or other conspiracies.”

In a separate meeting, the Iranian parliamentary speaker also warned the Iraqi leader of Americana and Israeli intentions to undermine the P.M.F. and other regional Shiite armed groups – citing the latest U.S. sanctions against the Lebanese Hezbollah.

Comment: The Iraqi prime minister arrived in Tehran after visiting Saudi Arabia, Jordan and Turkey. Abadi’s trip to Iran also comes at a time when there is a growing concern in Tehran that the United States is helping Saudi Arabia to establish strong ties with Iraqi leaders, including Shiite clerics and politicians, to counter Iran’s growing influence in Iraq and move Baghdad away from Tehran and closer to Riyadh.

When Abadi was in Tehran last time in May, Khamenei specifically asked him for two things: to expel American troops from Iraq and not to dissolve the P.M.F. after the fight against the Islamic State is over. It appears that Khamenei’s message this time remained the same.

With the Islamic State on the verge of defeat, Iranian leaders see the presence of American troops in Iraq as the biggest threat to their influence in Iraq and the broader region. Tehran and its Iraqi proxies have increasingly been calling on the Abadi government to set a timetable for the exit of American troops, but Abadi has so far rejected such calls and has maintained that U.S. military advisers will remain in Iraq to continue to train and strengthen Iraqi forces. Tehran is also concerned that under U.S. pressure the Iraqi government might disband the P.M.F., a broad alliance dominated by Iranian-backed Shiite armed groups. Some P.M.F. groups such as Asa’ib Ahl al-Haq and Harakat al-Nujaba are more answerable to Tehran than Baghdad – thus serve as an extension of Iranian influence in Iraq. Iran is also using these groups to prop up the regime of Bashar al-Assad in Syria and extend its sphere of influence in the broader region.