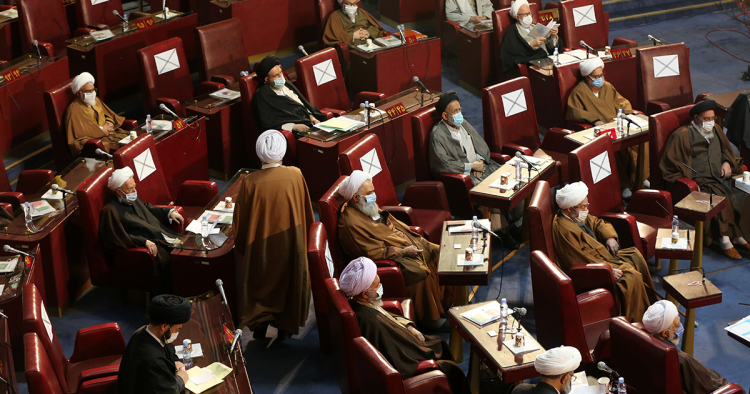 This is the second part of a three-part series.

In recent years, numerous analyses have been published on the increasing influence of the Islamic Revolutionary Guard Corps (IRGC) within the Iranian regime. There is no doubt that in the last two decades the IRGC’s power in the political, economic, and security spheres has significantly increased, and with the growing number of military or former military figures in the administration of Iran’s new president, Ebrahim Raisi, its influence is only set to expand further.

Nevertheless, the rise in the power of the military should not overshadow the fact that in the Islamic Republic, not only the paramount position of supreme leader, but also many other key roles are held exclusively by clerics. Moreover, many of these clerics, including the highest-ranking ones, must be appointed by the supreme leader.

This system was designed to ensure the loyalty of key officials, but over time has given rise to growing concerns over the reliability of the next generation of clerics and the transfer of power.

In addition, six out of the 12 members on the Guardian Council are Shiite jurists appointed by the supreme leader (the other six are lawyers nominated by the head of the judiciary and then voted in by the parliament). The Guardian Council is in charge of ratifying or rejecting parliamentary legislation, in addition to approving candidates in presidential and legislative elections, as well as those for the Assembly of Experts.

On top of all of the aforementioned clerics in high-ranking positions, there are tens of thousands of others in lower-ranking positions. Iran has more than 46,000 mosques and at least one cleric is needed to serve in every mosque as the prayer imam. All of these imams are appointed by a government organization, the Headquarters of Prayer Presenting, which operates under the supervision of the Office of the Supreme Leader.

The problem of aging clerics

Given the decisive role of the clergy in the Islamic Republic, there is little doubt that maintaining this structure in the long run requires a large number of "revolutionary clerics" who are fully trusted by the government.

On Feb. 28, 2020, Alireza A'rafi, appointed by Ayatollah Khamenei to be the director of Iranian Shiite seminaries, announced that the number of male students in seminaries across Iran amounted to around 100,000 (at the same time, the number of female students in seminaries amounted to about 80,000). Given contradictory statistics provided by various Iranian authorities over the past few decades, it is difficult to compare seminary student numbers over the years. However, the authorities have always portrayed the permanent rise in the numbers of seminary students as a major achievement for government institutions.

Despite the large number of seminary students, however, the supreme leader and his associates have been concerned that the seminaries are not training sufficiently qualified clerics to hold sensitive government positions (to better understand these concerns, see part one of this three-part series). Such concerns are reflected in the warnings of Ayatollah Khamenei and his appointees about such concepts as "de-revolutionizing the seminaries" and the prevalence of "secularism in the seminaries" (or as some have put it, the creation of "new secularism in the seminaries.")

These concerns are especially relevant when it comes to the high-ranking clerics needed to fill sensitive government positions. In fact, many important positions in government can only be held by clerics who have reached the level of ijtihad, referring to the personal ability to independently interpret religious questions not precisely covered by religious texts or other qualified clerics.

For example, six jurists from the Guardian Council, all 88 members of the Assembly of Experts, the head of the judiciary, the head of the Supreme Court, the attorney general, and the intelligence minister must be mujtahids, or clerics who are qualified to perform ijtihad. Furthermore, most of the supreme leader's representatives in provinces are mujtahids as well.

The lack of sufficient high-ranking clerics to hold government positions has forced Ayatollah Khamenei to keep many very old clerics in key positions. For instance, Ahmad Jannati, 95, still holds two key government positions: chair of the Assembly of Experts and secretary of the Guardian Council (the most important position on the council). Mohammad Yazdi, who died on Dec. 9, 2020 at the age of 89, remained a member of the Guardian Council until a month before his death, when he himself resigned. Yazdi used to chair the Assembly of Experts before Ahmadi Jannati took office in 2016.

Many Shiite marjas in Iran are also quite old. Marja is the highest title in Shiite seminaries and refers to a small number of qualified mujtahids with the authority to issue a formal ruling or interpretation on religious matters.

For instance, Ayatollah Lotfollah Safi Golpayegani and Ayatollah Hossein Vahid Khorasani (two of the most influential Shiite marjas in Iran) are 102 and 100 years old, respectively. Also, Ayatollah Hossein Nouri Hamedani and Ayatollah Nasser Makarem Shirazi (the closest marjas to the leader) are 96 and 95 years old. All of these grand ayatollahs entered the Shiite seminaries before the 1979 Revolution, while among the seminary students who started their studies after the revolution, no one has yet become a marja.

When these Iran-based grand ayatollahs die, the position of the Qom Seminary will be weakened in comparison with that of Najaf Seminary in Iraq, the other major — and many would say pre-eminent — center of Shiite religious scholarship, which is an unfavorable development for the religious authority of the Islamic Republic in the broader Shiite world.

Despite its large number of clerics and the huge budgets it devotes to the seminaries, the Iranian regime faces uncertainty about the future of both. As the current clerics continue to age, many key religious and government positions could eventually be handed over to unreliable clerics who may not endorse the principles laid out by the current supreme leader, with unpredictable consequences for the future of the Islamic Republic.