Lights On: Art at the Noor Riyadh Festival 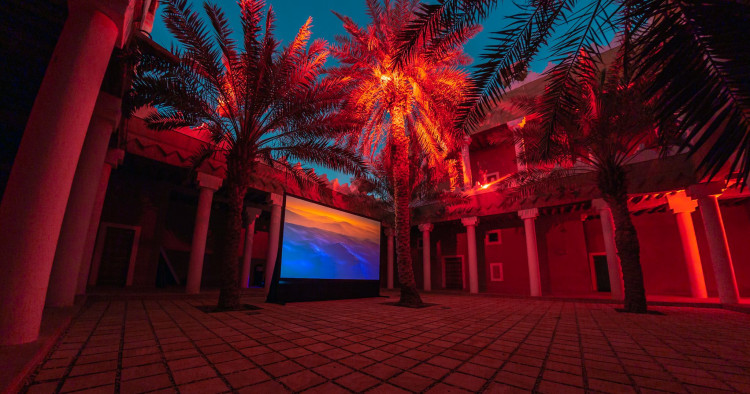 The rapidly growing state-supported arts infrastructure in Saudi Arabia tends to overshadow the lesser-known history of independent artist-led initiatives. The pioneering modernist Mohammed Alsaleem, for example, is known for establishing Dar Al Funoon Al Sa’udiyyah (The Saudi Art House) in Riyadh in 1979, the first space where artists could gather, work, mentor each other, and stage exhibitions at a time when there were no art schools or galleries. The Kingdom has gone through various stages in its cultural development from the 1960’s oil boom, a time of artistic productivity and government scholarships to study art abroad, to the tumultuous late 1970s of Islamic militancy and religious conservatism until the 2000s. “The 1960s was a time when art flourished in the Kingdom. In Riyadh, exhibitions by modernist painters were held in football clubs in order to engage the public,” says Raneem Farsi, an expert in Saudi Arabian contemporary art, of a time that has influenced her curatorial narrative. Along with Susan Davidson, former senior curator at the Guggenheim Museum, she is co-curator of the exhibition Light Upon Light: Light Art since the 1960s, which runs until June 12.

In comparison, large-scale light festival Noor Riyadh (which ended April 3), of which this exhibition was a part, feels top-down in approach. Although successful in activating public spaces teeming with urban residents, it is under the umbrella of Riyadh Art, the city’s first public art initiative launched by King Salman bin Abdelaziz Al Saud, and developed by the Royal Commission for Riyadh City (RCRC). The government-run initiative signals that the Kingdom, which exerts global geopolitical influence yet remains relatively insulated from the world, is ready to open up culturally.

"Noor" means light in Arabic and the sculptural works scattered across the sun-drenched city as part of Noor Riyadh surprisingly didn’t engage with natural light or solar energy. The featured artists largely referenced celestial and industrial forms of light, perhaps most dramatically in Robert Wilson’s works. His Daydream was an incandescent disc in cool hues alluding to lunar cycles, while Palace of Light was spectacularly staged in the heritage site of At-Turaif in Diriyah (the birthplace of the first Saudi state and part of a $ 20-billion restoration). Projected onto Salwa Palace, where the G20 summit was supposed to take place last year, an orb stood on a metallic landscape that reflected oceanic waves rising against the palace’s facade at night.

While public parks, historic districts and iconic buildings and were installed with sculptures referencing the stars, lightning, and bioluminescent algae in Noor Riyadh the exhibition Light Upon Light at the King Abdullah Financial District, is anchored in the idea of light as both concept and material. It took a more historical approach, beginning with Lucio Fontana’s immersive 1967 Ambiente Spaziale a luce rossa, where lines of sight intersect in a hazy red room of parallel corridors. It’s a strong start to the show, which flows seamlessly from one kind of spatial perception to the other. Fontana’s work is in counterpoint to Julio Le Parc’s kinetic art: the constantly shifting Continuel lumière cylindre (1962), which throws waves of light onto a circle of mirrors.

Works of historical significance are mainly by Minimalists and Light and Space artists from the US, such as the grid-like industrial compositions of Dan Flavin and the wavy neons of Keith Sonnier. An early experiment by Turrell, Afrum (Pale Pink), incorporates a 1967 corner projection where two light panels form a suspended cube and a lesser known 1973 architectural work by land artist Nancy Holt, Holes of Light takes the form of a perforated wall. “The work by Turrell is a groundbreaking piece that creates an optical illusion of volume and mass that floats untethered in space,” says Davidson, who formulated this section of the show for a Saudi audience to provide a historical grounding of how light became a medium for artists (though it does include a 2018 work (Buzy Body) by Robert Irwin of a row of unlit, colored fluorescent tubes, where the absence of artificial light lends itself to shadow and reflection).

From the more contemporary, ethereal works is Dana Awartani’s accordion-like installation, Diwans of the Unknown, which unfolds like a book of poems. Verses on love, longing and empowerment by female poets from Iraq, Syria, Andalusia and the Arabian Peninsula in pre-Islamic times light up its delicately embroidered silk panels in an ephemeral tracing of sound. Urs Fischer’s 2019 Leo (George and Irmelin) melts life-sized wax figures - a doubled DiCaprio and his parents - with candles perched on their heads. “This work makes us realize that light was not always electric,” Davidson says. “In previous times, light was dependent on candles and even though these are digitally rendered in form, and so are based in technology, the work is a nod towards a nonelectric world.”

Interesting technological parallels between Saudi and international artists are made in this optically configured world. Nasser AlSalem’s God is Alive, He Shall Not Die (2012) forms the word Allah (God) in Arabic, reflected recursively in neon calligraphy by a one-way mirror at eye level, while Ivan Navarro’s Podium (2018) comprises three cylinders you can step on to observe mirrored patterns receding endlessly downward. Leo Villareal’s swarming systems of almost 25 million pixels in Corona (2018) resonate with teamLab’s mesmerizing cycles of withering petals, programmed in real-time (Flowers and People, 2020). While there was a nuanced attempt to divide the exhibition into Perceiving, Projecting and Experiencing Light, respectively, the last section on Environmental Light lacked a sense of urgency with relatively surface treatments of the sun, extinction and plant life.

In a city that plans to grow from 7 million to 20 million people as part of Vision 2030, and aiming for 1,000 public sculptures across Riyadh, it’s clear that this is not just art for art’s sake. Since major socioeconomic and legal reforms led by Crown Prince Mohammed bin Salman bin Abdulaziz Al Saud, Saudi Arabia has been outward-facing and building a creative economy. The country will host its first contemporary art biennial, Ad-Diriyah Biennale curated by Beijing-based Philip Tinari this fall and is planning to construct a handful of museums too. If Saudi Arabia’s latest show looked at how something immaterial like light can create space and density, what’s coming might be less intangible but perhaps just as overarching.

Nadine Khalil is an independent arts writer, researcher, curator, and content specialist. The opinions expressed in this piece are her own.

Sectarianism and ideology: The cases of Iran and Saudi Arabia