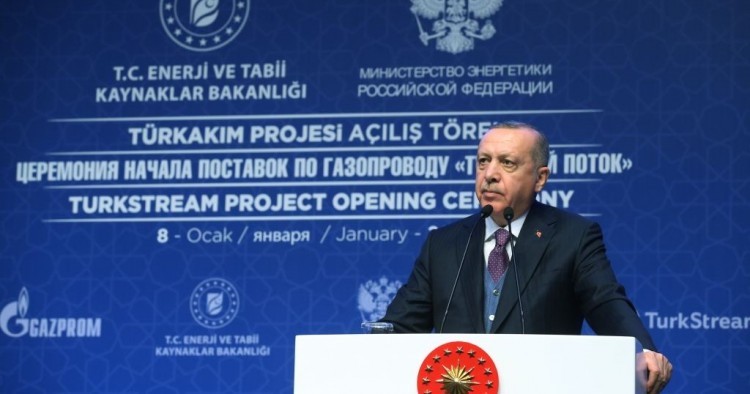 Until recently, Russia’s dominance in the natural gas markets southwest of its borders appeared unassailable. These days, that is less and less the case. Largely unnoticed yet dramatic changes are taking place in Turkey – Moscow’s top gas customer outside of Germany.

The Energy Market Regulatory Authority (EMRA) in Ankara recorded the import of 2.06 billion cubic meters (bcm) of liquefied natural gas (LNG) for last March. Delivered through ship cargoes and regasified at terminals located on the coast, it outstripped pipeline gas reaching 52 percent of total volumes received by Turkey. To put this in perspective, the share of LNG in imports stood at 29 percent in 2019. That percentage corresponds more or less to consumption as Turkey has negligible indigenous production. Motivated by low prices, , the Turkish national company BOTAŞ is ramping up purchases from Algeria’s Sonatrach, Qatargas and Nigeria’s NLNG, all entities with which the company has long-term supply contracts. Turkey is also buying on the LNG spot market, notably from U.S. firms. For all the diplomatic tensions between Ankara and Paris, BOTAŞ had no problem signing a three-year deal with Total last month.

The rise of LNG is bad news for Russia. Traditionally, Gazprom supplied more than half of the gas entering Turkey. Yet its share plunged from 52 percent (28.69 bcm) in 2017 to 47 percent in 2018 (23.64 bcm), to just 33 percent (15.9 bcm) in 2019.  While President Vladimir Putin and President Tayyip Erdoğan are talking up ambitious energy ventures – such as the recently inaugurated TurkStream pipeline – Turkish industries and households rely less and less on Russian gas.

Turkey’s turn to LNG is a function of both record-low prices and investment in import and storage infrastructure in recent years. Two floating storage and regasification units (FSRUs) recently became operational: one at Aliaga in Izmir (December 2016) and the other off Dortyol in the Hatay Province (February 2018). A third is planned for the Saros Gulfon Turkish Thrace’s Aegean coast. BOTAŞ is also expanding storage capacity, with the goal of reaching 5.4 from 1.2 bcm at present (under 3 percent of annual consumption in 2019). Storage development projects such as the one at Lake Tuz in central Anatolia allow for flexibility. ENKA, a private conglomerate, has recently applied for a permit to build a new FSRU near the port city Izmir. It would be Turkey’s fifth LNG import facility. Turkey will be able to buy and store more gas – whether LNG cargoes or through pipelines – at times when prices are down and pump it into the grid during peak demand (such as in winter when heating season kicks in for metropoles like Istanbul and Ankara).

The surge in LNG demand goes beyond Turkey. Next door, Greece has been on a buying spree too. In the last quarter of 2019, DEPA, the Greek national company, imported 1.2 bcm – a threefold increase compared to the same period in 2018. Overall, Greece received 2.8 bcm of LNG and 2.4 bcm of Russian gas delivered through pipeline in 2019.  The same year, DEPA sold a small shipment of LNG to Bulgargaz, a first such cross-border deal. Greece and Bulgaria are also cooperating on a project for a FSRU off the port of Alexandroupolis in the northeast part of the country. In January, Bulgartransgaz, the Bulgarian grid operator, confirmed its intent to buy a 20 percent stake in Gastrade, the company behind the venture. DEPA holds another 20 percent, and Romania’s Romgas is expected to jump onboard too.  The U.S. is also interested in the project. It was an agenda item during President Donald Trump’s meetings with with Prime Ministers Boyko Borisov (25 November 2019) and Kyriakos Mitsotakis (7 January 2020) at the White House. Greek purchases from U.S. suppliers of LNG soared in the first half of 2020 as well. Further to the West, Croatia will soon unveil a regasification terminal on the Adriatic island of Krk early next year with capacity of 2.5 bcm per year. Businesses have seized the opportunity. The facility is fully booked until the end of 2023 and has contracts for 1.5 bcm a year for 2023-7.  LNG is popular across Southeast Europe.

Cheaper gas for Turkey means extra leverage in negotiations with Russia.  Long-term contracts Gazprom signed with BOTAŞ and four private companies importing through the so-called Western route, currently served by the TurkStream pipeline, are up for renewal at the close of 2021. BOTAŞ’s contract for 16 bcm a year shipped through the Blue Stream, a pipeline running under the Black Sea since 2005, expires at the end of 2025 too. Ankara will no doubt try to extract better terms from the Russians, such as a discount on price or lowering the take-or-pay quota, which is currently at 80 percent of the contracted annual offtakes and so on. "The availability of cheap spot LNG and falling gas demand is a signal to our existing pipeline suppliers that they need to be flexible," Deputy Energy Minister Alparslan Bayraktar said in February. In addition to Russia, Turkey is driving a hard bargain vis-à-vis Azerbaijan (6.6 bcm contract expiring in April 2021)  and Nigeria (LNG deal ending in December). A three-year contract with Qatar (LNG) will be up for renewal at the end of the year but the diplomatic and security alliance between Ankara and Doha will likely smoothen talks.

In a nutshell, Turkey is moving forward with diversifying external energy links and its boosting its leverage.  Evening the playing field with Russia, to the extent that is possible, works in Ankara’s favor too, given the complexity of the relationship.  But that might not be enough for Turkey to realize its long-standing ambition of becoming a regional energy power. For one, its stagnant economy has depressed demand for hydrocarbon imports. Gas consumption shrank from 53.5 bcm in 2017, to 49.3 bcm in 2018, to 44.9  bcm in 2019, the lowest for the last five years.  With the recession triggered by COVID-19, 2020 does not look promising either, despite the government’s upbeat assessments.