Maliki and the Security Sector in Iraq 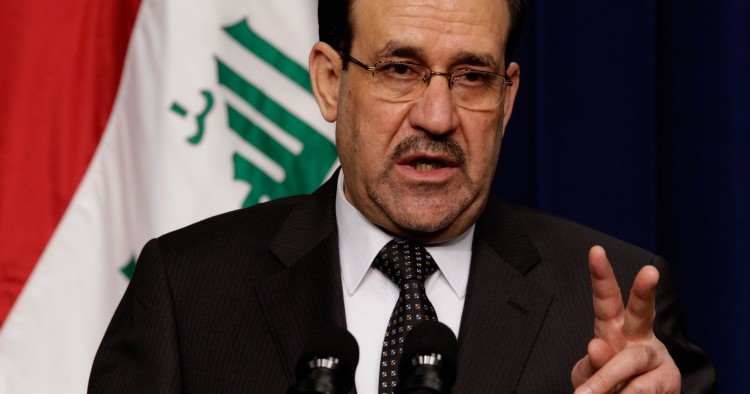 It would be unfair to argue that democracy fails to provide stability in divided societies or that democracy cannot work in Iraq. Instead, the term “democracy” should be redefined to take free market principles into consideration. As the Iraq case shows, any political group, party, or figure can manipulate the democratic system if the state apparatus controls the distribution of economic resources.

If, as in the case of Iraq, a political arrangement, constitution, or power-sharing formula results in a specific group gaining control of the distribution of economic resources, this imbalance will be reflected in the composition of the security forces as well as in their mission and activities, and it will likely result in the emergence of (armed) actors in opposition to them.

Authoritarianism, Democracy, and the Role of the Free Market

According to Galbraith, the U.S. invasion of Iraq and the establishment of a new regime produced lessons for authoritarian nation-states. That is to say, Saddam Hussein’s policy, based on centralization and authoritarianism, paved the way for disintegration, violence, and instability.[1] Thus, democracy and power-sharing agreements were regarded as the optimal pathway for Iraq to maintain unity and stability in the post-Saddam period.

Nevertheless, domestic turmoil in Iraq has continued notwithstanding the new constitutional design. Many discussions of this problem center on the ethnic and sectarian character of the domestic instability. On one hand, there is a violent competition among Sunni and Shi‘i Arab groups. On the other hand, Arab nationalists view the autonomy of the Kurdistan Regional Government (KRG) as a threat to the territorial integrity of Iraq. However, as Wilkenfeld and Brecher posit, ethnic and sectarian differences do not automatically cause intergroup tension and conflict.[2] As such, another condition is necessary for such conflict.

The absence of democracy has been used to explain intrastate conflicts before the U.S. invasion of Iraq. In other words, intergroup violence was a product of the Ba‘thist dictatorship, which excluded ethnic and sectarian groups from the government and threatened their survival. Yet instability and violence have continued since the fall of the Ba‘thist regime, leaving one to ask why power-sharing arrangements and democratic institutions have not prevented civil conflict.

According to Zakaria, the success of democratic regimes in promoting freedom and peace depends on the role of the free market economy. He argues that democratic procedures such as a parliamentary system, free and fair elections, and the rotation of elites were invented to protect individuals from the aggression of governments. However, in his view constitutional texts based on democratic principles do not suffice to limit the influence of government. Furthermore, the people’s will and support justify and legitimize the actions of the political party running the government. For example, the government could violate basic liberties of individuals for the good of the majority. Thus, property rights and a free market economy are essential to make a democracy function. That is to say, there is a causal relationship between the government’s will to regulate the markets and control the economy and the protection of individual liberties.[3]

Zakaria’s argument is inspired by von Hayek’s views on the influence of government intervention on the development of democracy. According to von Hayek, citizens keep their silence if their survival depends on the resources provided by the government instead of market mechanisms. Unlike traditional authoritarianism, which is based on systematic pressure, the government uses its control over the economy to maintain the loyalty of private actors.[4] As a result, citizens refrain from criticizing the government in order to survive. In the end, the term “election,” which was invented to check and balance the government, becomes meaningless if citizens cannot survive without the government’s mercy.

According to Shevtsova, Russia under Vladimir Putin’s rule is a perfect example of a political system in which a strong government presides over weak individuals. She argues that the Russian bureaucracy decides how to distribute economic resources, and therefore business circles and media owners do not criticize the government’s policies. Furthermore, Putin takes advantage of natural gas revenues to create wealth for citizens through government-led projects. Through such measures, Putin has successfully eliminated criticism, gained the support of the masses, and received a majority of votes.[5] The Putin administration, which is accused of being authoritarian, is therefore legitimized by democratic elections. Thus, as Zakaria and von Hayek point out, the free market is a necessary condition for democratic elections to promote individual liberties, which are essential to a democratic state and society.

State, Security, and Democracy in Iraq

Building on these theoretical propositions, the state formation process in Iraq helps us understand why democracy without the free market cannot produce domestic peace. In Iraq’s post-2003 democratic state, the ruling elite is chosen through elections. The country’s first permanent government, a national unity government, was formed on May 20, 2006, and Nuri al-Maliki, one of the leaders of the Shi‘i Islamic Dawa Party, became the prime minister following the parliamentary elections of December 2005. The second parliamentary elections held in 2010 produced similar results.

However, the Status of Forces Agreement (SOFA) that the U.S. and Iraqi governments signed in 2008 has given rise to Maliki’s authoritarian streak. According to SOFA, U.S. combat forces would withdraw from Iraqi cities by June 30, 2009 and from Iraq entirely by December 31, 2011. This meant that there would be less American influence over the government in Baghdad. The withdrawal of U.S. forces has given Maliki a free hand to pursue a centralization policy in the domestic realm, increasing his control over the political system. For example, in addition to his duty in the cabinet, Maliki has also occupied the positions of Minister of Defense, Minister of Interior, and Minister of State for National Security, and he has controlled the National Intelligence Service, the Iraqi Central Bank, and the Electoral Commission. He also issued an arrest warrant for Sunni Vice President Tariq al-Hashimi and sidelined Kurdish Chief of Staff Babakir Zebari and Sunni Deputy Minister Saleh al-Mutlaq. As a result, Sunni, Kurdish, and even some Shi‘i groups have accused Maliki of being authoritarian.

Maliki’s rising authoritarianism has increased the possibility of civil conflict in Iraq. For instance, relations between the governments in Erbil and Baghdad have gradually deteriorated. According to Iraqi Kurdish politicians, Maliki aims to violate the KRG’s autonomy and make Iraq a nation state as Saddam Hussein did. At the same time, the government in Baghdad does not have absolute control over Sunni-populated provinces such as Anbar and Mosul. Many assume that Maliki’s increasing authoritarianism prevents effective representation of the Sunni Arabs, who are excluded from government.[6] Thus, Sunni groups experience “relative deprivation” due to their sectarian identity and regard the Maliki administration as unfair.

An examination of the strategy that Maliki has followed to avert the threats stemming from the domestic challenges of Kurdish and Sunni groups can demonstrate why authoritarianism is rising in Iraq and why democracy, which is seen as a necessary and sufficient condition to provide stability, is losing ground. Key to this examination is Maliki’s approach to the economy.

The Iraqi economy is based mainly on income generated by oil exports. Ninety-five percent of the central budget and 70 percent of the country’s GDP come from oil revenues. Maliki uses these revenues in part to employ large numbers of security sector personnel, which is the easiest way to provide jobs for unqualified male voters. According to Hamid Obaid al-Mutlaq, an Iraqi parliamentarian from Anbar Province and a member of the Security and Defense Committee, there are approximately 1.5 million security sector personnel in Iraq.[7] Media reports say that four million people—60 percent of the total full-time employed work force in Iraq—work for the government.[8] This means that approximately 23 percent of all Iraqi employees operate under one of the security departments. As a result, the government allocates funds to ensure the loyalty of a significant percentage of its citizens, which in turn consolidates Maliki’s electoral popularity.

Yet the excluded actors from this security sector apparatus not only experience economic deprivation but also feel threatened. Thus, Maliki’s attempts to centralize the political system through economic tools jeopardizes domestic peace and security. According to Lake and Rothchild, a security dilemma occurs at the domestic level when the survival of identity groups is threatened. Collective fear of the future causes these groups to organize and participate in armed struggle to protect themselves from the potential aggression of the central government. Therefore Maliki’s policy, which is based on creating and funding a security sector in order to consolidate his power in the political system, threatens the other identity groups and undermines the country’s security. On the other hand, it should be noted that the domestic turmoil provides Maliki with the legitimacy to allocate more funds for the security sector and gain popularity among voters. In the final analysis, Iraq remains locked in a vicious cycle because these funds are never enough to employ all voters and soothe ethnic and sectarian tensions.

Democracy in the absence of the free market not only produces authoritarianism but also undermines domestic peace and stability in divided societies. Maliki has ensured that in Iraq, security sector employment is a tool not just for building an authoritarian regime but also for fueling a cycle of domestic strife.

[1] Peter W. Galbraith, The End of Iraq: How American Incompetence Created a War without End (New York: Simon and Schuster, 2007).