The Mass Rape of Rohingya Muslim Women: An All-Out War Against All Women 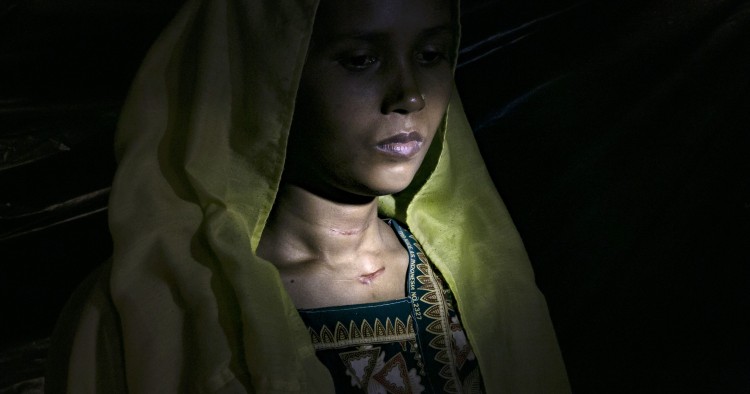 In far too many conflicts around the world, rape and sexual violence — primarily targeted against women and girls — have been, and continue to be used as a strategic and tactical instrument of war.[1] The past 20 years have shown that accountability for wartime rape and sexual violence victims has been the exception, not the rule.[2] Despite the passage in April 2019 of UN Security Council Resolution 2467, which aims to strengthen justice and accountability in cases of wartime rape, governments are still failing to act.[3]

Rape has been a central component of the genocidal campaign waged by Myanmar’s military and security forces against the Rohingya ethnic minority, in which Rohingya Muslim women and girls have suffered unspeakable sexual violence at the hand of powerful men, many wearing military or police uniforms.[4] Yet, there has been little accountability, as those responsible for what the UN, U.S. elected officials[5], the government of Canada and other governments have called genocide,[6]  have gone largely unpunished.  Even those acting under explicit state authority, as is the case of Myanmar’s military and security forces, have been reassured and are confident that their government and their borders will shelter them.

The mass rapes of Rohingya women and girls “were not just the sum of individual sexual assaults by disparate, coincidental decisions of individual soldiers.”[7] They were used by Myanmar with the specific intent to destroy the Rohingya as a group, at least in part. Those acts fit squarely within the definition of the crime of genocide under the 1948 Genocide Convention for the Prevention and the Punishment of the Crime of Genocide (Genocide Convention). And, while a state such as Myanmar cannot incur criminal responsibility for the commission of genocide, it can and must be held accountable for its failure to comply with its obligations under the Genocide Convention.

It has been two years since the unfathomable violence unleashed for decades by Myanmar’s authorities against the Rohingya Muslims of Rakhine State in northwest Myanmar took a brutal turn. This latest explosion of violence has consisted of a campaign of systematic and widespread extermination through mass killings; extensive and continuing destruction and burning of Rohingya homes and villages; and rampant and endemic sexual violence.  The deliberate campaign of violence has caused an estimated 10,000 deaths and led to more than 700,000 Rohingya Muslims to flee from Myanmar across international borders into Bangladesh, joining in their tumultuous rush 300,000 Rohingya who were forced out during previous waves of state-sponsored violence, making the influx one of the largest and fastest-growing refugee crises since the Rwanda genocide.[8]

Over a million Rohingya Muslim, half of whom are women and children, have been forcibly displaced from Myanmar under circumstances in which it is clear that the perpetrators’ intent was to evict them permanently from their homeland.[9] Dependent completely on the kindness, compassion and empathy of the world while they wait for a place to call home, Rohingya refugees have been left to drift in abjectly inhuman conditions in the largest refugee encampments in the world. Indeed, by most assessments, conditions in the makeshift camps fall well short of international standards. Camp residents occupy unstable structures in low-lying areas susceptible to cyclones, monsoons and flooding; and generally have poor access to clean water, latrines, or healthcare.[10] Each one of these encampments stands today as a symbol of humanity betrayed.

There is every indication that the official policy of Myanmar’s government was primarily to rely upon massive displacements and forcible population transfers that have taken place as a result of serious violations by Myanmar’s military and security forces of international human rights law and international humanitarian law, including and specifically the use of rape and other form of sexual violence. Rape and mass rape of Rohingya Muslim women and girls was more than a casualty or a by-product of the conflict, or the madness of a war; it was part of the Myanmar’s military policy, planned at the highest echelon of the state and used as a strategic instrument intended on destroying a targeted group.[11]

In the United States in 2017, Americans were transfixed by the accounts of multiple women who bravely came forward to denounce sexual harassment and assaults, including rape by powerful men.[12] Half away across the globe, other women — not the white, educated, outspoken, relatively affluent women who were able to retain lawyers to claim their rights but mostly illiterate, voiceless, stateless and poor women, some of them girls as young as seven — were tied by their hair and hands to trees and gang raped, for no other reason than being Rohingya Muslims. Their horrific accounts are reminiscent of those of the Tutsi women of Rwanda[13] and the Bosnian Muslim and Croatian women of the Former Yugoslavia.[14]

Rohingya men and older boys were disproportionately targeted for mass killing,[15] while Rohingya women and girls were subjected to many other violations, including and specifically mass rape, which has been for long a prominent feature of the extreme brutality and scale of atrocities carried out by Myanmar’s military against the Rohingya Muslim ethnic minority. Rohingya Muslim women suffered excruciating physical and psychological pain. Many survived their horrific ordeals and have been left to bear the burden of telling the world the story of why, where, how and when of the war perpetrated against them.

Any war is ugly, but the level of injustice, massive criminality and impunity in the Rohingya conflict is breathtaking. Perhaps the darkest side of the Rohingya carnage is the innumerable women and girls who have been violated, tortured, mutilated, degraded, and traumatized.[16] The taboo and social stigma associated with rape is so potent in the Muslim culture and tradition, that these victim-survivors are ostracized — cast out and cut off from their families and communities. Their tormentors knew too well that rape would be worse than death for its victims and would come at a very low cost for its perpetrators. Their tormentors also knew that the rape of Rohingya women would humiliate and subordinate their men.

The true test for the international community’s commitment to ending impunity for international crimes perpetrated against the Rohingya ethnic minority and bringing to book their tormentors, would be to ensure first and foremost accountability for wartime rape committed against the Rohingya Muslim women. Full accountability for these crimes requires that they be investigated, charged and prosecuted as genocidal acts.[17] Acknowledging that mass rape perpetrated against Rohingya women and girls fits squarely within the requirements of Lemkinian genocide will draw attention to the vicious nature of the crime, will afford to women the protection of international human rights law and international humanitarian law in armed conflicts, and will provide symbolic vindication for the Muslim women of Rakhine.

[2] Lisa Boswell Sharlach, “What Will It Take to Punish Perpetrators of Mass War-Time Rapes,” Scholars Strategy Network, May 25, 2018, https://scholars.org/contribution/what-will-it-take-punish-perpetrators-mass-war-time-rapes.

[6]Report of the detailed findings of the Independent International Fact-Finding Mission on Myanmar, September 17, 2018, A/HRC/39/CRP.2, https://undocs.org/A/HRC/39/CRP.2.

[7] John Packer, “Genocide is an act of state, and demands a response by other states”; May 10, 2019, OpenGlobalRights, https://www.rohingyatoday.com/en/genocide-act-state-and-demands-response-other-states.

[11] The 2018 report by the UN Secretary-General on conflict-related sexual violence included Myanmar’s armed forces on an annual list of groups that are “credibly suspected of committing or being responsible for rape or other forms of sexual violence.” See Report of the Secretary-General on Conflict-related Sexual Violence, March 23, 2018, UN Security Council, S/2018/25, https://undocs.org/S/2018/250.

[16] “‘All of My Body Was Pain’: Sexual Violence Against Rohingya Women and Girls,” Human Rights Watch, November 16, 2017, https://www.hrw.org/report/2017/11/16/all-my-body-was-pain/sexual-violence-against-rohingya-women-and-girls-burma.