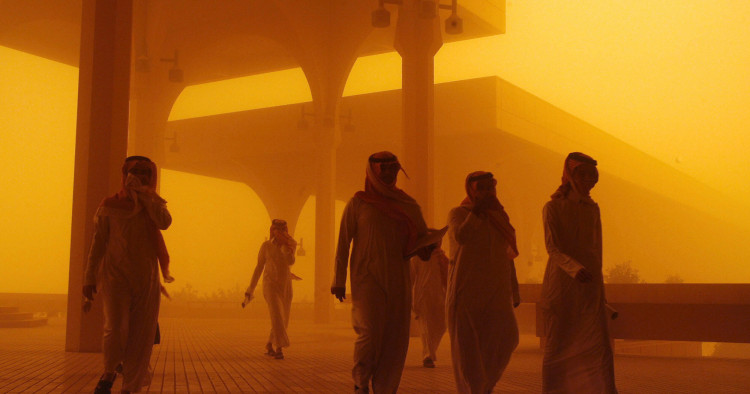 Recent months have seen unprecedented levels of dust storms in the Middle East. Hundreds of people were hospitalized because of breathing difficulties; public buildings, offices, and schools were closed; and flights were grounded. Sand and dust storms are not a new experience for the people of the region, but continuous exposure to thick blankets of dust — as seen in April and June 2022 — is quite alarming and has affected local communities and residents across the region from Syria to Iran.

Before further elaborating on the causes of sand and dust storms, it’s worth differentiating between them as two distinct and different phenomena. Often these types of events are referred to as sandstorms in the media when in fact they are dust storms, although both are made up of soil particles. In principle, soil particles can be divided into three categories: sand, silt, and clay; each with compositional differences in their soil chemistry. Sand particles range in size from 2.0 to 0.05 mm, silt particles from 0.05 to 0.002 mm, and clay particles are smaller than 0.002 mm in diameter. Clay particles are the finest type of soil particles; in fact, some are so small that they are not visible even when using ordinary optical microscopes.

Sandstorms are mainly constituted of sand particles. Their impact is generally local as gravity does not allow sand particles to be displaced a great distance, including both moving up in the atmosphere vertically or across the land surface horizontally. In such conditions, depending on the strength of the wind, they are distributed within tens of kilometers horizontally or a few hundred meters vertically from their source. However, dust particles are quite different, as they are made up of silt and clay, which form natural colloidal and nanoparticles with unique properties. The impact of dust particles can spread far wider — even across continents. For example, every year about 180 million tons of Sahara dust leaves Africa and travels on a 5,000-km journey across the Atlantic Ocean; about 27 million tons of this dust ends up deposited in the Amazon rainforest. Dust particles can also move vertically in the atmosphere up to 6-7 km. Such properties increase their impact beyond their countries of origin and are the reason why seemingly apocalyptic orange skies have been seen across the wider Middle East in the past few months.

The health impacts of dust storms have been studied extensively. In reference to air pollution, when we talk about particulate matter (PM) pollutants and PM 10 and PM 2.5, we refer to pollutants that are equal to or smaller than 10 and 2.5 μm or 0.0100 or 0.0025 mm respectively — categories into which both silt and clay particles fall. Thus, people who are exposed to dust particles show symptoms of exposure to high concentrations of PM 10 and 2.5. These initially appear in the form of breathing difficulties, while damage to the lungs and the immune system are consequences of long-term exposure to such pollutants.

However, one aspect of dust storms that is less well explored is the impact they have on renewable energy sources, particularly solar farms. The Middle East has plenty of clear sunny days, which makes it a near perfect location for deploying solar power plants. In recent years we have seen a number of announcements of ambitious solar projects in the region, particularly from Saudi Arabia and the UAE. Some of these projects have already become operational; however, the region’s arid climate and vast empty deserts create their own challenges for such solar plants. Regular solar farms employ photovoltaic (PV) panel surfaces to absorb solar radiation and convert it into electricity, while concentrated solar power (CSP) farms, including the Noor Energy project in the UAE, use mirror panels to reflect and concentrate sunlight into a receiver.

In both systems, regular and CSP, if the panels are covered in dust, they fail to function as expected. Dust storms happen frequently in the Middle East and as a result, keeping the panel surfaces clean is a difficult task. Climate change is also expected to make this problem worse, resulting in more heatwaves and higher temperatures. Cleaning the panels of solar plants will thus not only be more challenging, but it could also reduce their energy generation efficiency. The presence of dust particles in the atmosphere can affect energy generation as well. Accumulation of these colloidal particles can deflect incoming solar radiation and significantly reduce the potential solar energy that can be received by solar farms, subsequently reducing their electricity output. As the share of solar energy in the region’s energy portfolio grows, reduced electricity output could have major negative impacts on the economy and energy security.

Temperature is another important factor to consider as well. Most of the manufactured PV panels have less electricity output when the surrounding temperature rises above 25°C, and the generated voltage is reduced as the temperature continues to increase. This issue highlights the importance of considering the challenges that existing PV technology faces in the Middle East and the necessity of developing solar technologies that are compatible with the region’s climate. Solar PV panels that can remain efficient even when their surface experiences temperatures of 40° to 50°C, and those that require minimum maintenance despite frequent and intense dust storms or prolonged heat waves can ensure long-term sustainable deployment of solar energy in such arid environments.

The impact of dust storms on energy generation is not limited to reducing incoming solar radiation or PV panels’ ability to absorb it. Dust storms can also affect existing electricity transmission infrastructure. Dust particles, when they have enough moisture content, are as conductive as metal wire. If dust settles on electricity transmission lines and becomes damp due to high humidity or light rain, short-circuits can occur. That’s why the dust on electricity transmission and distribution equipment needs to be cleaned regularly. An example of such an incident occurred in 2017 with the Khuzestan electricity grid in southwestern Iran. After several days of severe dust storms, light rain and high humidity caused short-circuits in the main electricity transmission lines and several cities — including the provincial capital Ahvaz — experienced crippling power outages for about 24 hours. Schools and public offices were forced to close for several days, and hospitals faced severe problems due to the lack of electricity and limited backup power. Iran blamed Iraq for the consequences, saying that it didn’t take the necessary actions to reduce the number of domestic dust storm hot spots, illustrating the transboundary nature of dust storm events.

One of the most crucial ways to mitigate against dust storms in the Middle East is to enhance soil conservation and stabilization. There are opportunities for countries in the region to collaborate on different methods for soil stabilization, including planting native desert plants and developing barriers of trees and shrubs to protect the soil from storms and reduce erosion, often referred to as shelterbelts. Historically, shelterbelts have proven to be effective, as was the case in the 1930s when the Southwestern Great Plains of the U.S. suffered major droughts as the Dust Bowl severely affected life and agriculture in the region. To address this issue the U.S. developed a national shelterbelt program, which drastically reduced the number of sand and dust storms and significantly mitigated their impacts.

Today, existing technologies like satellites can provide direct information on soil moisture conditions, helping to identify the driest soils in the region and the areas most susceptible to becoming new dust storm hot spots. Drones can not only provide access to real-time images of the state of soil and land conservation, but they can also help to plant seeds, particularly in remote areas, in a cost-effective and efficient manner. In terms of reducing the impacts of dust storms on public health and the economy, the World Meteorological Organization’s Barcelona Dust Regional Center provides 72-hour forecasts of dust concentrations and the direction of their movements, based on atmospheric dust models. Greater usage of this data by regional governments could offer many benefits, including substantially reducing risk by helping countries plan and prepare for potential dust storms in various ways, such as alerting hospitals ahead of time or informing people about likely school and office closures. Greater public awareness of the data could also help citizens prepare for dust events in real time.

Dust storms are a major environmental challenge in the Middle East. They cannot be completely eliminated, but their frequency and impact can be mitigated. It is a tangible cross-boundary issue that affects everyone in the Middle East and regional collaboration to address it is in the best interest of all affected countries.

Hamid Pouran is the program leader for MSc Sustainability and Climate Change at the University of Wolverhampton. The views expressed in this piece are his own.