The Military Muzzling of Thailand and the Quandary of Demilitarization 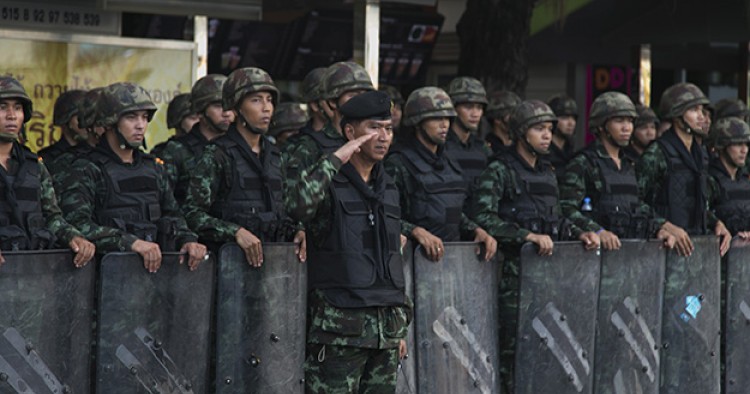 This essay is part of the Middle East-Asia Project (MAP) series on “'Civilianizing' the State in the Middle East and Asia Pacific Regions.” The series explores the past and ongoing processes of Security Sector Reform (SSR) in Asia-Pacific countries and examines the steps taken and still needed in the MENA region. See More...

Over a year has passed since the latest military coup in Thailand. On May 22, 2014, then-Army Commander Gen. Prayuth Chan-ocha led a putsch against civilian Prime Minister Yingluck Shinawatra. The coup followed six months of demonstrations against Yingluck and her brother, fugitive ex-Prime Minister Thaksin Shinawatra. The protests, centered in Bangkok, were reportedly protected by military elements.[1] During these demonstrations, the military leadership’s public stance veered from apparent neutrality to sympathy for the protests. Such a perspective from the senior brass was not surprising. After all, most of them had also been intermediate-level implementers of the previous 2006 coup against Thaksin. Following the 2007 elections that brought a pro-Thaksin government to office, many of these same top military leaders had also supported the cobbling together of an anti-Thaksin coalition government in 2008. In 2010, they oversaw the brutal repression of pro-Thaksin demonstrations.[2]

Officially, the military asserted the need to putsch for the following reasons: Gen. Prayuth’s reconciliation efforts had failed; it was necessary to combat corruption; and the armed forces felt the need to return order to Thailand as well as protect the king.  But the coup achieved other goals. It reasserted monarchical-military control over Thailand, consolidated the power of the leading faction over the country’s security forces, and contained threats to vested interests posed by the Shinawatra family and their lower-class supporters. Finally, if the sovereign did pass away in the immediate future, the coup ensured that the arch-royalist military would be in a position to influence a stable royal succession.[3]

Following the May coup, the new junta implemented martial law and attempted to achieve military, economic, and political control over Thailand. First, a Peace Maintaining Force was created to arrest and detain potential enemies of the state. Thus far, this force has succeeded in detaining close to 500 Thais. Second, Thailand’s judiciary was augmented with military courts. These courts involve long pre-charge and pre-trial detentions, prohibit appeals, and can produce harsh sentences. They are also closed to public observation. The junta has increased prosecutions of persons suspected of insulting the monarch as well.[4] Third, the military initially took control over all state enterprises and then boosted the number of sinecures offered to senior military brass, especially from the leading Queens Guard military faction. The coup group also initiated weekly Friday-night television addresses to the nation by Prayuth called “Bringing Happiness Back to the People.” In addition, the junta has sponsored shows, songs, and movies that promote nationalism, and it has implemented educational reforms whereby 12 junta-designed “virtues” are required to be taught in schools.

In July 2014, the king endorsed a military-backed interim constitution. It amnestied the coup-makers and bestowed far-reaching powers upon the junta leader (Article 44). Prayuth meanwhile appointed several law-making bodies to put together a new constitution that would pave the way for a new general election. This was to take place in late 2015; it has, however, been repeatedly postponed. Currently, the date for the next general election is sometime in late 2016. Self-appointed as prime minister in August while also remaining junta chief, Prayuth announced several objectives for his administration, and quickly increased the size of the military budget.[5]

Thailand’s economy initially improved following the 2014 coup. This was due to the putsch’s ability to stabilize the country following half a year of street demonstrations in Bangkok.  Nevertheless, military regimes—and the political instability surrounding them—are rarely appealing to foreign investment, and Thailand has been no exception. And even before the coup, foreign investment had dropped off, gross domestic product had stalled, economic growth had contracted, and domestic demand had weakened.[6]

As happened following the 2006 coup, several countries have rightly condemned the 2014 putsch and the continuation of military governance, particularly the United States and the European Union. Washington also cut military aid and diminished its involvement in the annual Thai-U.S. military exercise, Operation Cobra Gold. Prayuth responded by increasing defense and economic linkages with China, which has not criticized the coup. The Thai dictatorship has also appealed for foreign governments to extradite political fugitives back to Thailand.[7]

Enshrining a Return to the Past

The three regime-created bodies tasked to write a new constitution were the National Legislative Assembly, the National Reform Council, and the Constitutional Drafting Committee. Military officers or their allies dominated the first, while mostly conservative academics or bureaucrats who supported the coup filled the latter two.

After months of discussion, the bodies arrived at a constitution that is still subject to amendment. However, the charter already represents a reversion to the less democratic times of pre-1992 Thailand. It creates a senate that is mostly appointed and possesses enhanced authority. It allows the possible selection of an unelected prime minister, with potential for a military official to fill the role. The power of the Constitutional Court will grow enormously, while political parties’ clout will plummet.[8]  Electoral gerrymandering and use of multi-member districts will further diminish party power.

The military will probably also acquire more influence over state decision making. For example, it looks set to gain greater control over its own budget, including slush funds, through security decrees, more sinecures for senior brass in state corporations, and near total control over yearly military reshuffles. Also, military courts’ expanded influence since the coup could become entrenched and last for years. And legal impunity for soldiers facing most forms of legal redress for grievances will likely continue. Finally, Article 191, which gives the military the right to declare martial law “as a matter of urgency,” could be interpreted as giving the military a right to oust civilian leaders.[9]

What has been the popular response to Thailand’s military regime? First, Prime Minister Prayuth, despite his use of repression and arrests to keep order, has been assisted by continuing deep political divisions in Thailand. Since the coup, only limited resistance by pro-Thaksin demonstrators (dubbed “Red Shirts”) has occurred.[10] Only small gatherings of mostly university students have dared to actively oppose the military. In mid-2015, these appeared to be growing, and the military’s detention of 14 students affiliated with the Dao Din and Neo-Democracy Movement groups worsened its public image.[11] A possible future massacre of resistant students could unite public opinion against the military and similarly influence individuals close to the palace, but for now such a scenario is unlikely.

In the short term, three factors have helped to sustain the military regime: magnitude of crisis; level of cohesion; and historical-cultural legacies. In terms of magnitude of crisis, the military has used the rationale of returning order to Thailand to justify its coup and tyranny. Regarding level of cohesion, as long as the military is more united than civilians, it can probably persist in playing a dominant role in the country, and even continue to administer it. Finally, in terms of historical-cultural legacies, the heritage of a strong military in Thailand—supported by the palace—has assisted in psychologically legitimizing the perseverance of the military regime. Nevertheless, in the long term, a potentially worsening economic crisis, growing civilian unity against the military or military disunity, and the fact that Thais have demonstrated a preference for democracy, could force the military out of power.

Like Thailand, both Egypt and Pakistan have politically powerful militaries capable of ousting civilian governments. With Thailand’s military supposedly set to eventually hand power back to civilians, the Egyptian and Pakistani cases represent possible scenarios for Thailand’s future. In Egypt, Gen. Abdel Fattah el-Sisi ousted an elected president in 2013 and then won a controversial election as president himself in 2014. In Pakistan, the civilian government exerts little control over a military that has not staged a coup since 1999.[12] Taking cues from these cases, Prayuth or another Thai military officer could seek to build or use a Thai political party as a mechanism from which to get elected to office. Alternatively, the military could find proxy parties to represent its interests in parliament while persevering as a political heavyweight on the sidelines of an eroded democracy. Either way, the military looks set to play a major role in Thai politics for years to come.

In all three cases, a national crisis, civilian disunity, and historical legacies of authoritarianism have made it difficult to dislodge militaries from power or subordinate the armed forces to civilian rule. In such a situation, how can Thailand, Egypt, and Pakistan move toward demilitarization and thus open themselves up to greater political participation? Such is the challenge when the military’s takeover of civilian decision making makes it difficult to envision or enact change.

[12] Husain Haqqani, “Even Without a Coup, the Military Has Already Won in Pakistan,” Huffington Post, September 3, 2014, http://www.huffingtonpost.com/husain-haqqani/pakistan-military-won_b_5757116.html.