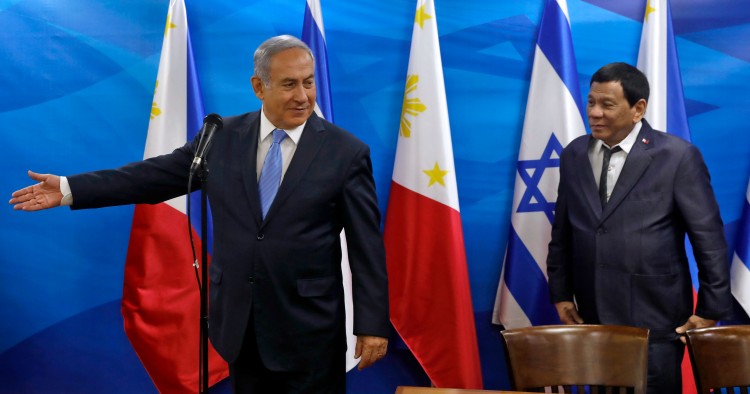 Over the past two decades, Israel has developed robust bilateral relationships with China, India, and Singapore. Israel has also succeeded in forging ties with Japan and South Korea.[1]  More recently, Israel has devoted considerable attention to strengthening its relations with Southeast Asian countries, particularly the Philippines, Thailand, and Vietnam, as well as Myanmar.

Military-security cooperation in the form of arms trade as well as technology transfer and licensed production has emerged as an important dimension of Israel’s relations with Southeast Asian countries.

Israel’s four largest defense firms all originated as government ventures: Elbit Systems, Israel Aerospace Industries (IAI), Israeli Military Industries (IMI), and the Rafael Arms Development Authority. The Israeli defense sector also includes as many as 700 defense-related small-to-medium-size private companies. Although defense products are marketed to one domestic customer — the Defense Ministry — and geared toward equipping the Israel Defense Forces (IDF), Israel has also had a thriving arms export business.  In his widely read 1985 book, Israel’s Global Reach: Arms Sales as Diplomacy, Aharon Kleiman observed: “The military rationale for transferring Israeli weapons in effect served as the intermediate link between political and foreign policy incentives on the one hand, and economic motives, on the other.”[3] For well over a decade, Israel has consistently ranked among the top 10 defense exporting countries.

However, in recent years, Israel’s defense industries have had to contend with two challenges. First, the global arms landscape has become increasingly competitive. This is reflected in the fact that since 2012, Israeli arms exports have sharply declined. Reacting to the downturn in export revenues, defense industry leaders mounted a high-level lobbying effort in 2015, which included a letter to Prime Minister Benjamin Netanyahu, in which they warned of a “clear crisis.”[4] Second, and more recently, under the terms of the latest revised US military aid package Israel is expected to gradually phase out off-shore procurement (OSP), that is, to no longer spend a quarter of the funds on its own defense businesses.[5] This development has put additional pressure on Israeli defense firms to compete in existing and new overseas markets.

But the Asia-Pacific region, which has been a lucrative arms market for quite some time, has remained so even in these leaner years. Of Israel’s total global arms exports in 2018 (worth $7.5 billion), 46% were purchased by Asia-Pacific countries.[6] The arms trade lies at the center of Israel-Southeast Asia military-security cooperation.

Military spending and demand for arms imports have steadily increased in Southeast Asia over the past 10-15 years. There are several key drivers of this military buildup in the region: surging economies; aging equipment; the desire to promote local industry; and heightened security concerns related to unresolved maritime territorial disputes, China’s assertive behavior, the threat of violent extremism, and persistent insurgent activity.

Between 2001-2018, Israel sold a variety of weapons to Burma/Myanmar, including 76mm (naval guns), M-68/M-71 155 mm (towed guns), armored cars and Super Dvora patrol craft.[11] Israeli arms sales to Myanmar came under intense domestic and international scrutiny in 2017 as the Rohingya crisis intensified, culminating in a High Court ruling barring such transactions that was kept secret at the state’s behest.[12] to Myanmar. Given Israel’s past experiences of conducting arms trade in secrecy, it should not come as a surprise should such clandestine activities be found to be continuing with Myanmar. Yet, despite Israel’s claim that it has stopped arming Myanmar following the court ruling in September 2017,[13] the presence of Myanmar’s military delegation[14] at the Israel Defense and Homeland Security Expo held in Tel Aviv in early June 2019 further raised the suspicions of a continuing Israel-Myanmar arms trade.[15]

Israel has faced criticism for its arms sales to Philippines similar to that it received for doing business with Myanmar, due to the Duterte government’s poor human rights record. IsraelDefense reported that Israel Weapon Industries and Emtam Karmiel would supply the Philippine National Police (PNP) with  8,170 units of 5.56x45mm assault rifles in 2016-2017, 698 units in 2017 and 4,933 in 2018.[17] Duterte has acknowledged Israel’s importance as an arms supplier, and reportedly even ordered his military to purchase defense items, including intelligence gathering equipment, only from Israel.[18] In September 2019, Philippines received two Hermes-450 UAVs from Israel, with further deliveries expected in 2020.[19]

Israel’s military-security cooperation with Southeast Asian countries does not consist of arms sales alone. Systems upgrades and joint-ventures have become important features these relationships. For example, in July 2015, six M113 armored personnel carriers, upgraded by Israel, were delivered to the Philippine Army.[20] A year earlier, Israel’s Elbit System was awarded a contract worth $290 million[21] to an unnamed Asia-Pacific customer to perform upgrades on tank, and another $85 million[22] for upgrades on that country’s (most likely Singapore’s) F-5 avionics. In October 2019, the same entity signed a contract estimated at $153 million to supply Unmanned Aircraft Systems (UAS) to an army of an unnamed Southeast Asian country.[23]

Vietnam is a good case where Israel Weapon Industries established a production facility at a cost of $100 million, in 2014, to supply Galil ACE 31 and 32 assault rifles to the Vietnam People’s Army, with the objective of replacing Kalashnikov rifles.[24] In 2012, Israel’s Elbit and Royal Thai Army (RTA) launched a joint-production venture, involving technology transfers. Because of this, the mentioned Israeli firm reportedly built the first ATMOS platform in Israel, followed by production of the same item by the RTA’s Weapon Production Center in Thailand.[25]

Israel is emerging as an important source of defense equipment for the above-mentioned Southeast Asian nations. These Asian clients have openly made known their preference for Israeli-made weapons systems, particularly because of Israel’s “no-strings-attached” policy over its arms export activities, regardless of the nature of the ruling government or regime. The realpolitik and strategic interests of both sides have been instrumental in bringing the ties closer than ever before.  Increasing demand for defense items due to emerging security challenges, the quest for technological advancement in their defense industries, and Israel’s willingness to meet some of the requirements of these Southeast Asian countries will contribute to the expansion of their cooperation.

In March 2015, Israel and Vietnam signed an MoU to strengthen defense cooperation, which would enable them to expand their arms trade, technology transfer, and licensed production.[26] With these formal arrangements, Israel’s involvement in further upgrading Vietnam’s defense systems and technology seems likely. Likewise, Thailand’s defense cooperation with Israel can be expected to grow, given the former’s need to modernize its military and to strengthen defenses along its eastern borders. Furthermore, as Israeli diplomats and tourists have been exposed to terror threats on Thai soil, counter-terrorism cooperation, including intelligence and information sharing, remain imperative.

Beyond the arms trade, Israel has entered the counterterrorism (CT) domain. Troops from the Israel Defense Forces (IDF), for the first time, trained their Philippine counterparts (July 2019).[27] Thailand’s need to address the evolving security situation in the southern provinces could also provide scope for cooperation with Israel.

Specifically regarding arms sales to Southeast Asia, however, Israel will likely have to contend with bigger competitors such as the United States and Russia, even in weapons system categories where it has made inroads as a niche supplier. In the longer term, advancing bilateral relations cannot be accomplished merely by promoting military relations, let alone arms sales. The long-term goal, therefore, for Israel should be to strive unrelentingly to translate its growing defense cooperation with these countries into enduring political partnerships.

[18] “Duterte says he’ll buy only Israeli weapons… because there are no restrictions,” The Times of Israel, September 4, 2018, https://www.timesofisrael.com/duterte-says-hell-only-buy-israeli-weapons-because-there-are-no-limitations/.