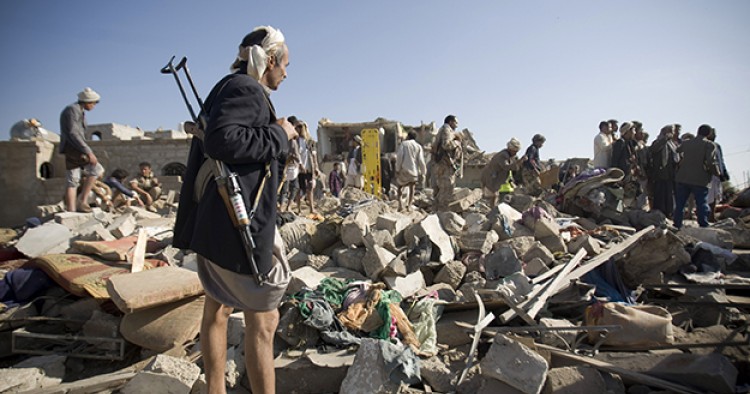 Saudi Arabia’s military intervention in Yemen is a risky move motivated by various Saudi objectives in Yemen and in the region. The immediate objective is to save President Abdu Rabbu Mansour Hadi from Ansar Allah’s advance on Aden and reinstall him as head of state by forcing Ansar Allah to make major political concessions. But the operation also marks the increasing willingness of the Saudis to use their own military rather than rely on the United States.

Since the Arab Spring, the Saudis have been concerned that U.S. and Saudi interests do not always coincide, and that in light of the nuclear negotiations between the United States and Iran the Saudis might become less important to the United States. The coalition of forces supporting the operation therefore represents Saudi Arabia’s attempt to build a regional mutual defense alliance independent of the United States. In addition, the commander of the Saudi-led operation is the son of the new king, and the succession to the next generation of Saudi princes may be playing some role, even if marginal, in Saudi calculations.

While the coalition aims to curb Iranian influence in the Arab world and has sectarian overtones, it is primarily an expression of Saudi state interests in their conflict with Iranian state interests. The Saudis will support the Shi‘a as they did in the Yemeni civil war in the 1960s and attack Sunnis as they do in Iraq against ISIS. The Iranians will support Sunnis as in the south of Yemen where Ali Salim al-Beidh and the separatist movement receive ample Iranian backing. The conflict is over interests, not theology.

The Saudis may fall short of their goals in the Yemeni operation. The attacks targeted first the air power of the Yemeni military controlled by Ansar Allah, some of the military bases used by Ansar Allah or loyal to Ali Abdullah Saleh, and the residences of Ansar Allah leadership as well as Saleh’s residences. While Saudi military leaders boasted that the operation took out Yemen’s air force in the first 15 minutes of the operation, a week later Ansar Allah and Saleh’s forces are still inside Aden. Ansar Allah made strategic gains by arriving at the sea in Abyan Province, the home of Hadi, effectively cutting the south in two. Forces loyal to Saleh and ironically under the command of Hadi made the same strategic gain in 1994 and went on to take Aden easily. Air superiority may not be sufficient to halt Ansar Allah’s advances.

Abdul-Malik al-Houthi reacted to the air strikes by saying that not only would Ansar Allah repel the foreign invasion but also that it would bring down the Saudi monarchy. More practically, Ansar Allah began dispersing its military forces and leadership personnel to lessen the impact of the air raids. Ansar Allah also attacked the offices of media that it considers likely to disseminate “enemy propaganda,” that is, Yemeni media opposed to Ansar Allah and foreign media from the Gulf such as Al Jazeera.

The offensive in the south has continued unabated. Ansar Allah has also sent forces toward the border with Saudi Arabia in the north, perhaps in anticipation of a possible ground offensive. While some in the coalition against Ansar Allah may hope for a quick unraveling, Ansar Allah’s long history of successful insurgency in the north against far superior forces of both the Yemeni and Saudi military should give pause to those who hold such hopes, particularly since Ansar Allah now possesses much improved weaponry than it wielded during the insurgencies.

Saleh did as many supposed he would. On the second day of Saudi air raids, he proposed new negotiations. Saleh wants to position himself as essential to any political solution in Yemen and thus guarantee a place for himself and his family in the future of Yemen. He called for a cessation of air strikes, a pullback from the advance on Aden, and new negotiations in the UAE or in the offices of the UN.

The location for negotiations has been used as a political football. Negotiations in Sana with UN rapporteur, Jamal Benomar, were ongoing throughout the crisis. In fact, under their umbrella Yemen’s political parties had agreed on a set of institutions to guide the country to elections. Ansar Allah proposed, and Yemen’s political parties agreed, to create a five-member presidential council and a legislative body combining the existing parliament—dominated by Saleh’s party—with 200 or so additional members to better represent Yemen’s political parties. The only real difference between the negotiators, which thwarted the deal, lay in the opposition’s insistence that Hadi head the presidential council, whereas Ansar Allah and Saleh proposed that the head be a southerner other than Hadi, such as former Prime Minister Ali Mujawar.

However, the importance of the Saleh proposal is not its content, but the fact that he is already positioning himself for a central role in negotiations. Saleh still commands extensive loyalties in the military, and his military units are essential to Ansar Allah’s efforts to advance in the south and the east. Saleh’s distancing himself from Ansar Allah—his party insists it is not a party to Yemen’s conflict—represents an important development that may facilitate the path toward negotiations, as it is designed to do, or it may be the last desperate attempt of Saleh to survive the crisis.

On the third day of air raids, Benomar announced the possible resumption of negotiations with all parties, and the Yemeni crisis dominates the agenda at the Arab Summit Meeting in Sharm el-Sheikh. Negotiations may well reopen soon, but Ansar Allah is unlikely to make significant concessions. Ansar Allah consistently participated in negotiations while breaking all of its agreements and continued its advances on the ground from Sadah to Sana in 2014. Negotiations may simply buy time for Ansar Allah.

Ansar Allah provoked the animosity of many only when it took power and began dictating political terms and violating civil rights of opponents, much like the Saleh regime it opposed. In 2010, when Ansar Allah emerged from its long insurgency against the Saleh regime, the movement enjoyed great sympathy among the many opposition forces that were also targets of Saleh’s wrath. Ansar Allah was a central participant in the National Dialogue and was well respected by Yemen’s political leaders. The Saudi-led intervention, particularly in the case of a prolonged ground incursion, might help Ansar Allah regain sympathy as a victim of foreign aggression. Ansar Allah may benefit from prolonging the conflict.

The United States and al-Qa‘ida: Chaos and Threats

In Washington, partisan politics focuses on Obama’s statements that Yemen is a model for U.S. counterterrorism policies.[1] Of course, Obama’s policy assumes conditions that support the U.S. strategy of allying with local partners, and in Yemen, those conditions have changed. If there is any place for blame for Yemen’s current predicament, it lies in the failures of Hadi’s transitional government and its international backers—the UN, Washington, London, and the GCC itself. Hadi’s government could not address the deteriorating security and economic conditions that increased the misery of Yemenis’ daily lives.

Hadi and his supporters focused on the National Dialogue hoping that a new constitution and new elections would stabilize Yemen. But Hadi’s government did not have sufficient political roots to survive the tactics of Saleh and Ansar Allah once they allied in 2014 to shift the political foundations of the transitional government. In poor economic conditions, Ansar Allah, like al-Qa‘ida, is able to recruit fighters easily with the promise of regular money and a place in the militias. Hadi’s government and its international backers could not muster a sufficient response to Yemenis’ worsening existence. Elections do not bring food to the table in the short term.

Many commentators fear that Yemen’s problems will increase threats to the United States, as observers simplistically equate political instability and opportunities for al-Qa‘ida or ISIS. Some focus on the loss of U.S. contact with Yemeni security that provided intelligence for drone strikes. Yet the view that the loss of intelligence for drone strikes will benefit al-Qa‘ida assumes that drones worked. In the six years of intensive drone attacks in Yemen, al-Qa‘ida’s leadership remains intact. While it is true that al-Qa‘ida has not mounted any successful attacks outside of Yemen since 2010, it may not be for lack of opportunity, but a result of al-Qa‘ida’s shifting its attention to domestic Yemeni issues, particularly its decision to attempt to govern territory and fight the Yemeni military in 2011.[2]

In reality, some of the most effective operations against al-Qa‘ida have come from Ansar Allah’s forces as they pressed into Bayda Province against al-Qa‘ida strongholds that Hadi and Saleh’s government never touched, though Ansar Allah’s ability to translate its military gains to political stability in the southern central region has not been demonstrated. Al-Qa‘ida wants to claim the leadership of the fight against Ansar Allah not only for political gains, but also for survival—Ansar Allah is a powerful threat. With 150,000 Saudi troops reportedly positioned on the eastern border and Ansar Allah advancing on the south, al-Qa‘ida’s fortunes do not look as rosy as commentators assume by equating instability with the blossoming of al-Qa‘ida.

Facing the prospect of a prolonged military conflict with no real potential for victory on either side and a rapidly growing humanitarian crisis, Yemenis are suffering from a long series of failed political leaderships. The GCC-brokered interim government of Hadi failed to provide any real hope of resolution to the economic and political crises gripping the country after Saleh resigned.  International backers rested too easy on the assumption that the discussions of the National Dialogue in the five-star Movenpick Hotel in Sana could provide effective political leadership for the country.

The rapid rise of Ansar Allah in 2014 is largely attributable to the failure of the Hadi government to provide any hope for real solutions to people’s everyday problems. But Ansar Allah quickly betrayed its promise to correct the failures of Hadi’s government by behaving quite similarly to Saleh’s repressive regime. Ansar Allah physically attacked its political opponents, detained journalists, shot at protesters, and imposed its will on the government. While Yemen’s political leadership did agree with Ansar Allah and the southern movement that Hadi’s interim government had excluded them, Ansar Allah’s unilateral imposition of its solution destroyed the political process of consensual institution building that might lead to a more stable political process in Yemen.

Finally, the Saudi resort to violence in order to assert its dominance over Yemen and the Arab world is a sign of the failure of the traditional Saudi strategy of buying influence with cash in Yemen. Seeing its local clients fail, the Saudi leadership has embarked on an ill-fated adventure to quell its fears of an independent Yemen.

[1] Obama in fact offered Somalia and Yemen as models, but the press and pundits focus on Yemen rather than the perhaps more questionable case of Somalia.

[2] Men radicalized in prison by Algerian militants, far from Yemen, carried out the Charlie Hebdo attacks attributed to al-Qa‘ida in Yemen.