Missing the bigger implications of US withdrawal from Afghanistan 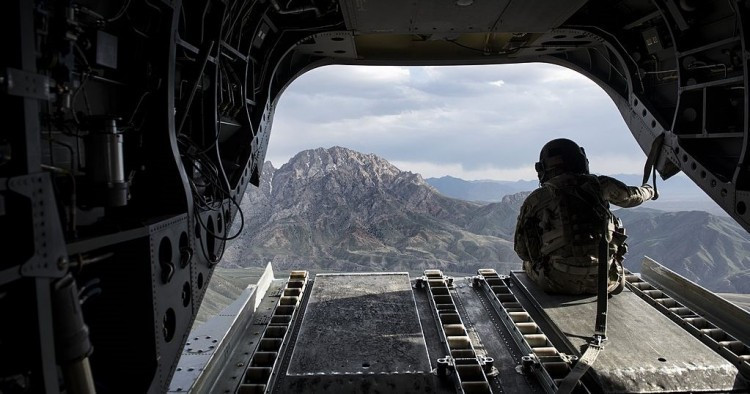 As the United States exits from Afghanistan, on the eve of the 20th anniversary of the 9/11 attacks, it is important to reflect on the broader and longer-term reverberations of that withdrawal. In examining the withdrawal, peace process, and the recent dynamic of militia building and Taliban control, it’s becoming clear that a different transnational threat to U.S. interests is emerging.

The U.S. has been mistaken in believing the Afghanistan war was ours to direct, and we are mistaken now if we think it is ours to “end.” The conflict has just entered a new phase with the international troop withdrawal. Instead of an environment we can help manage, the U.S. will be buffeted by the consequences of the predatory behavior of Afghanistan’s neighbors and non-state terror organizations. We now have nuclear-armed states competing for influence in Afghanistan with no NATO presence to mitigate their ferocity. We failed this test in the 1990s and paid for it in 2001. With that in mind, the best course for the U.S. is to reengage, rather than renege on our commitments, in order to protect our interests in this important region.

The overall objectives of the 2001 U.S. intervention in Afghanistan were to fight the parties responsible for the 9/11 attacks — al-Qaeda and the Taliban government — and ensure that Afghanistan could not be used as a safe haven for groups that threatened U.S. security. But these threats have been resilient. In a recent interview, al-Qaeda operatives promised, “War against the U.S. will be continuing on all other fronts unless they are expelled from the rest of the Islamic world.”

A new level of uncertainly and instability has emerged with the news and deadline of the U.S. withdrawal, and no concrete plan or measure is in place for counterterrorism. With one-third of the country under Taliban control, high levels of violence are concerning. Unknown peace prospects send the message that the Taliban may seek to embark on a military takeover, which could result in a civil war. Terror groups like the Islamic State-Khorasan Province (ISKP) in the eastern provinces of Afghanistan and targeted killings by the Taliban generate fear among the educated and professionals for their survival. This has resulted in a new wave of Afghan migration, particularly of the highly skilled population. The deteriorating security situation will further divide the political factions in Afghanistan and invite regional players to join the conflict, fueling the proxy war and creating space for violent extremism to emerge and thrive.

Over the last 20 years, terrorist groups have patiently exploited opportunities to exert themselves. Global politics and enabling conditions for regional alliance building have given them the traction they needed in Iraq, Syria, the Sahel, and elsewhere. In addition, ungoverned or ill-governed physical areas and inadequate governance capacity allowed them to plan, communicate, and operate at opportune times. Radical movements have expanded their influence in various localities, resulting in ideologies that contradict the systems that promote an open society and its values. The Taliban have been ambiguous about their plans for a political settlement, stating only that they envision an Islamic system that embraces all Afghans. But they are clearly fighting for the restoration of an emirate similar to one they ruled in the 1990s, alarming those who experienced their authoritarian system. Reports highlight that the Taliban still have links to al-Qaeda and ISIS, which further exacerbates the security situation and shows how a Taliban victory would help strengthen transnational terrorist groups.

The insecurity in Afghanistan raises major concerns among its neighbors, particularly as threats of cross-border militancy and drug trafficking reach their borders and affect internal security and stability. The regional actors in Central Asia are especially on edge, as the recent surge in violence in Afghanistan affects certain border areas in the country’s northern provinces. This includes the escalation in armed conflict on the Tajik-Afghan border, which made Moscow step in and offer its support to Tajikistan. For the sake of their own security, these countries don’t want a direct armed conflict or high-level insurgency in Afghanistan. The relationship between Central Asian countries and Afghanistan continues to be cordial, with the former expressing their ambitions for cooperation through bilateral agreements to expand trade, development, and diplomatic relationships. But without some level of security and stability in Afghanistan, such bilateral agreements will remain mere written documents that cannot be realized.

The next and the most important player in Afghan war and peace is Pakistan, which believes the Taliban are set for victory. After 20 years of support, the Pakistanis see this as their own win.

There is also a general belief among some observers that the U.S. will eventually outsource Afghanistan to Pakistan, opening the door to political engagement and economic incentives between the U.S. and Pakistan. However, such a deal will concern India, which worries about the potential security threats that a Pakistan-supported Taliban could pose. Islamabad and New Delhi strive to impede each other’s political influence in Kabul, and their policy of engagement will take into consideration this common objective.

At this point the uncertainty in Afghanistan makes it hard for New Delhi to cement its policy of engagement. If India sees Pakistan control and influence Afghanistan, there will be a new phase of conflict between them inside Afghanistan, which will further aggravate the instability and insecurity and only add more elements of radicalization and violent extremism.

In addition, as Taliban victories on the battlefield grow, all other factions will ramp up their efforts to build militias and create an opposing force to defeat them. Expect regional powers to arm and supply money to their preferred factions and for the militias to keep switching sides and loyalties for gains that will further weaken the Afghan central government. If the Afghan government holds after the U.S. withdrawal, countries like China and India will be more active in Afghan affairs. If the Taliban capture power and the government, Pakistan’s influence will increase significantly.

Iran, Russia, and China remain ambivalent about the U.S. withdrawal and will hold off to see how Afghanistan’s political landscape changes. The United States has been in constant negotiations with regional players for security and counterterrorism assurances, but the regional players have a price tag for those demands. This includes security assurances and resources that will allow their economic gains.

In the current context, Russia intends to play a leading role in developing a regional consensus on Afghanistan’s future power structure through an expanded “troika” alongside the United States, China, and Pakistan; China already announced that the Belt and Road Initiative will extend to Afghanistan, after saying in 2019 that it will enhance connectivity by extending the China-Pakistan Economic Corridor (CPEC). China’s success in these endeavors depends upon stability. So it will strive to play a convening role to ensure some level of security for realization of its economic interests in Central and Southwest Asia. Meanwhile, the Afghan government may reach out to China to supersede the U.S. presence at Bagram and fill the vacuum left by the Americans’ withdrawal.

Where does this leave us?

With the deteriorating security situation, the security-centric interests of these countries may lead them to forge stronger diplomatic and security ties with each other. The regional powers are likely to ask for assurances from the Taliban to refrain from harboring extremists and favor their economic interests. To that end, they may take a lead in Afghan peace making. Tehran’s recent hosting of Taliban-Afghan government talks and earlier negotiations hosted by Moscow demonstrate that the regional powers are aware that the Taliban will hold power in a matter of months or years, therefore building a relationship with them at this critical time opens the door for future bargaining. All these factors add up to one dispiriting reality: the U.S. government — and the American people — cannot simply wipe the dust off our hands, ship out of Afghanistan, and never look back. To be fair, President Joe Biden has indicated we will remain engaged with Afghanistan through security and development assistance, and through our diplomacy. But the details of those efforts largely remain to be seen, and America’s eagerness to put the 20-year experience in Afghanistan behind us suggests there will be little, if any, urgency to conduct more than an arms-length involvement there.

We can and must do better. Of immediate priority, we should:

The complex and competing motives driving many others who will fill the void left in the wake of disengagement in Afghanistan suggest an ominous future for the people of Afghanistan, the region, and, indeed, American strategic interests. We may think we are shutting the door on our difficult 20 years in Afghanistan, but before long we will have little choice but to respond to what’s happening behind it.

Nilofar Sakhi is the director of policy and diplomacy at McColm & Company, and a nonresident senior fellow at the Atlantic Council’s South Asia Center. She is also a professorial lecturer at George Washington University’s Elliott School of International Affairs.

Annie Pforzheimer is former Acting Deputy Assistant Secretary of State for Afghanistan and Deputy Chief of Mission in the U.S. Embassy in Kabul, and a current member of the steering committee of Alliance for Support of the Afghan People. The opinions expressed in this piece are their own.