Is Morocco willing to jeopardize its relationship with Europe over the Western Sahara? 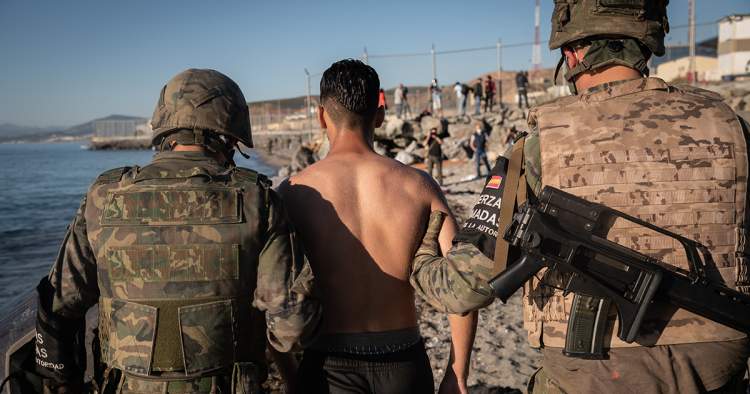 The scene was a familiar one, even if the scale was not. On May 17 and 18, thousands of migrants entered Ceuta, one of two Spanish enclaves in North Africa that border Morocco. The record flow of irregular migrants surpassed 12,000 people — including whole families and hundreds of children — over the course of two days. The Spanish authorities quickly understood that this surge in migration was about more than the usual human desperation that has driven large numbers of people over fences and across water in an effort to enter Europe in recent years. Morocco, troubled over Madrid’s stance on its territorial claims over the Western Sahara, decided to retaliate.

And so the dramatic scenes that unfolded in th Mediterranean coastal city were linked to an even bigger movement of people that took place decades ago, far to the south. In 1975, as Spain, the colonial power, was leaving the Western Sahara, Rabat sent 350,000 Moroccan civilians to occupy the region. This organized mass demonstration, known as the Green March was Morocco’s way of securing its sovereignty over the territory.

Over the next 16 years, Morocco fought a war against the Polisario Front, which sought independence for the region, until a U.N.-brokered cease-fire was signed in 1991. The peace negotiations mandated a referendum be held to determine the territory’s status, but Morocco has long prevented the processnstead, it has establish de-facto control over four-fifths of the territory by invest projects and encouraging Moroccans to move there. The Moroccan government has also suppressed any expression of sovereignty by Sahrai. The struggle for control of the resource-rich Western Sahara is at the heart of the recent surge in migrants attempting to enter Spain.

Since Mohamed VI’s ascension to the throne in 1999, much of Morocco’s foreign policy has been directed toward securing international recognition for its claim over the Western Sahara. For years, the process was slow and often ineffectual, despite the support of several African governments. But late 2020 saw a dramatic acceleration in Moroccan efforts — and their results. In November, Rabat convince the UAE to become the first Arab country to back its territorial claims. Abu Dhabi opened a consulate in the Moroccan-controlled part of Western Sahara, prompting several other countries, such as Bahrain and Jordan, to follow suit. More importantly, in December 2020, then-US President Donald Trump recognized Moroccan sovereignty over the entire territory, in exchange for the normalization of relations between Morocco and Israel. The deal, which was part of the Trump administration’s much-touted Abraham Accords, involved the establishment of official diplomatic relations between several Arab nations and Israel. Securing support from the USgovernment was a major diplomatic victory for Morocco. Contrary to Rabat’s wishes, however, it did not lead to a flood of similar gestures from other nations, nor did it result in the much-coveted European Union (EU) recognition of Moroccan control over the territory.

In recent months, the Moroccan authorities seemed to grow impatient over their inability to capitalize on Trump’s support. This may have been due, in part, to the extent to which the international community viewed the Trump administration as an anomaly. Many countries saw its major decisions — including those on climate, U.N. or NATO funding, and the Iran nuclear deal — as temporary ones that would be rolled back when a more traditional president entered the White House. Washington’s recognition of Morocco’s sovereignty over the Western Sahara may also fall under that category, as it represented a major departure from the long-standing U.S. position. Joe Biden’s reluctance to reinforce his predecessor’s gesture appears to suggest as much.

This inability to leverage American recognition seems to have pushed Morocco to increase pressure on the EU. In March, Rabat suspended contact with the German embassy in Morocco because of Berlin’s criticism of Trump’s position on the Western Sahara, and it later recalled its ambassador to Germany. But it is the quarrel with Morocco’snext-door neighbor to the north that has turned this dispute into a broader regional one between Rabat and Brussels.

Unlike with Berlin, however, the situation with Madrid escalated quickly. In April, the Spanish government allowed Brahim Ghali, the septuagenarian leader of the Polisario Front, to be hospitalized in Logroño, a city in northern Spain. The Spanish government said it allowed his hospitalization on humanitarian grounds, but its decision to admit Ghali, one of Morocco’s biggest political foes under a false name and without consulting Morocco infuriated the authorities in Rabat.

few weeks after Ghali’s arrival in Spain large numbers of migrants began crossing the Moroccan border into Ceuta. If Spain had any questions about what was driving the sudden influx in migrants, Moroccan Ambassador Karima Benyaich eliminated all doubts, telling a Spanish news agency, “Certain acts have consequences that must be faced” before she was recalled to Morocco for consultations. The unusual flow of people stopped after two days, and many have since returned to Morocco. A few days later, the Moroccan official stance softened, and authorities instead claimed that migrants had benefited from the fatigue of border personnel at the end of Ramadan.

But as authorities in Rabat and Madrid , the dispute was never about migration. This recent influx of migrants mirrors a similar episode in 2016. When the European Court of Justice ruled that the Western Sahara was not part of Morocco, the kingdom relaxed its border controls, prompting several crossings of migrants into Ceuta. This is in partthe EU’s fault. Much like the deal it struck with Turkey, whereby it has paid billions of euros to Ankara to keep irregular migrants from crossing into Europe, outsourcing migration control to Morocco has given the kingdom leverage over EU policy. These deals may alleviate pressure temporarily, but they are far from a long-term solution to the problem. Moreover, Morocco is becoming less and less shy about using its leverage, and it is applying it to the single most important issue on its foreign policy agenda: securing the legitimacy of its control over the Western Sahara.

Ghali’s stay in Spain was further complicated because he was part of a 2012 open case at the Audiencia Nacional, a Spanish central court that investigates major crimes. Ghali and other Polisario leaders were accused by a Sahrai human rights organization of multiple crimes, including illegal detention, torture, and terrorism. After learning of his presence in Spain, Rabat pressured Madrid to act on the pending case. Rabat also made it clear that the diplomatic dispute between the two countries would only worsen if Spain allowed Ghali to leave the country secretly.

On June 2, after appearing remotely before the Madrid court, Ghali finally left Spain and returned to Algeria following a more than month long stay. While Spain has said it hopes relations with Morocco will return to normal, for now it is unclear if Ghali’s departure will be enough to help ease bilateral tensions.

By allowing thousands of migrants to cross into Spain, and then stemming the flood after two days, Morocco was not just punishing Madrid for letting Ghali in. It is also taking a page out of Turkey’s diplomatic book and signaling to the EU that it too is prepared to use migrants as a pressure mechanism. Images of migrants crossing into the continent illegally can upend European politicscreate campaign fodder for populist movements Moroccan authorities tried to assuage EU worries by re-centering the diplomatic spat on Spain exclusively. In a series of appearances in French media on May 23, the Moroccan minister of foreign affairs, Nasser Bourita, stated that there was no crisis between Morocco and the EU. The recent border crossings in Ceuta suggest otherwise though.

Morocco may have leverage in this dispute, but using it is not without risks. Trade between Spain and Morocco reached Dh144.4bn ($16.2 billion) in 2019. More broadly, the EU remains Morocco’s biggest trading partner and is a key customer for its manufactured goods and agricultural produce. French and Spanish tourists account for nearly half of all tourists visiting Morocco in a typical year. After the economic disruption caused by the COVID-19 pandemic, GDP fell by 6.3%, and the kingdom will depend on European customers and tourists to restart its economy. Although politics will probably not stop tourists from visiting Marrakesh Agadir Morocco risks losing political goodwill in European capitals as a result of the current crisis.

Rabat has many legitimate grievances about the costs and requirements of acting as the EU’s policeman. But the recent events on its border with Spain will likely shatter a certain idea that EU bureaucrats and government officials had about the union’s partnership with their southern neighbor. Morocco has often been seen as a force for good in a troubled region a mildly authoritarian monarchy with humane intentions. But its campaign to gain recognition of its sovereignty over the Western Sahara is eroding that view. While arranging aid deliveries to Palestinians in Gaza, Rabat simultaneously gambled with the lives of Moroccans and sub-Saharan migrants at the border, knowing full well that Spain would send them back. One migrant died and as of June 1, around 1,000 unaccompanied minors remained in government and charity shelters in Ceuta.