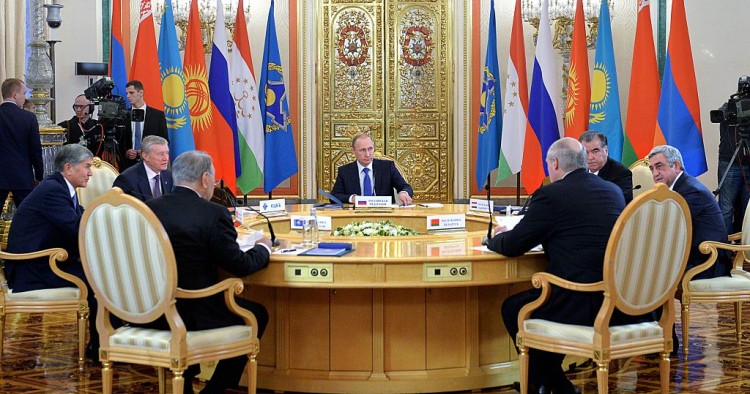 Despite the collapse of the Soviet Union, the newly independent states of the Caspian and Russia are still deeply intertwined in each other’s economies, security, and cultures. Moscow has continued to wield considerable military, political, and economic influence in the region. In the 1990s, Russian influence in many of the former Soviet republics atrophied. Vladimir Putin, who became president at the end of 1999, has made restoring Moscow’s sway in the Caspian area a national priority. One of his main projects has been to incorporate these states into stronger, Moscow-controlled economic and security structures than the weak Commonwealth of Independent States formed when the Soviet Union collapsed in 1991. Russia’s main multilateral security structure is the Collective Security Treaty Organization (CSTO), a mutual defense alliance modeled after NATO. Its main economic structure has been the Eurasian Economic Union (EEU), modeled loosely after the EU. Moscow also pursues bilateral governmental and commercial ties with each Caspian country that reflect Russian goals and instruments regarding each country.

Following the September 2001 terrorist attacks against the United States, the Russian government reluctantly accepted the U.S. military invasion of Afghanistan – as well as a large Pentagon presence in the Caspian Basin states – as an unavoidable consequence of the region becoming a global hotbed of terrorism. The Russian national security establishment apparently presumed that the U.S. would reestablish stability to Moscow’s South – a mission that exceeded Russia’s then limited capabilities – and then depart. In a couple of years, however, the regional instability from the “color revolutions” against the Kremlin-friendly regimes in several former republics, which Moscow blamed on Washington, led Russian leaders to perceive the U.S. presence as a substantial threat to Moscow’s regional goals. Russian officials have increasingly pressed Caspian Basin states to limit their military ties with the West.

Moscow wants to control the Caspian region to realize its ambition of revitalizing its international influence and status. Its regional goals encompass security primacy, political stability, advantageous commercial deals, and constraining other external states such as China, Iran, and the United States. These nation states have become the main threat to Russia’s security primacy in the region, displacing the previous focus on transnational threats such as terrorism, illegal migration, and narcotics trafficking. Having a geographic buffer on Russia’s southern flank is useful, but the region could become a barrier whereby other powers can impede Moscow’s influence. Though China’s growing economic presence in the former Soviet republics makes reestablishing a single, shared economic space under Moscow’s control unrealizable, Russian firms still want to share in the billions of dollars’ worth of oil and gas contracts at play in the region.

Moscow sees the Caspian region as constituting its southern defensive frontier against threats from that region as well as Afghanistan, Pakistan, Turkey, and the Middle East. Consequently, the Russian armed forces have some permanent military bases in the region and conduct periodic exercises and other deployments. Armenia, Kazakhstan, Kyrgyzstan, and Tajikistan are formal military allies of Moscow, whereas Azerbaijan, Turkmenistan, and Uzbekistan buy Russian weapons and cooperate intermittently with the Russian armed forces. Officially, the CSTO was created to promote the mutual security of its member states, which are Armenia, Belarus, Kazakhstan, Kyrgyzstan, Russia and Tajikistan. But the CSTO gives Russia, the institution’s dominant member, a mechanism for projecting influence in the Caspian. For example, the organization makes it harder for members to develop defense ties with external powers without Moscow’s consent.

Even after the Soviet collapse, Moscow sustained several economic connections inherited from the Soviet era. Caspian states have continued to rely heavily on transportation, communications, supply-chain, and other networks that either traverse Russian territory or fall under Russian control. Furthermore, many Caucasus and Central Asian nationals continue to work in the Russia Federation (or for Russian companies elsewhere). In some Russian cities, they provide substantial labor in the construction and cleaning sectors. Many Russian nationals also hold important posts in Caspian companies. However, according to the EEU Eurasian Commission, intra-EEU trade has declined during the first four months of 2020, totaling only $15.8 billion, a decline of 16.3% compared with the first four months of 2019. In contrast, the EEU’s trade with non-members amounted to $203 billion from January-April 2020, of which almost $40 billion involves imports from, or exports to, China.

Russian soft power in the Caucasus and Central Asia is extensive due to the heavy presence of Russian TV, media, and films in local markets. Despite local efforts to promote indigenous languages, knowledge of the Russian language remains widespread among local elites, who often have similar education and work experiences as their Russian counterparts. Many young people study in the Russian Federation or at local Russian schools. However, Russia’s previous dominance over the supply of information control technologies to its Caspian partners is being eroded by PRC firms like Huawei.

Moscow has yet to master its security challenges in the Caspian region. Georgia is alienated due to the Russian occupation of substantial Georgian territory, whereas Azerbaijan and Armenia will likely remain at loggerheads. Moscow’s security ties with Uzbekistan have improved and that country may eventually rejoin the CSTO. Yet, whether even an enhanced CSTO can manage the Western military withdrawal from Afghanistan is uncertain. Given the Soviet experience, none of its members want to send combat forces back into the country.

In February, the Trump administration released a new “United States Strategy for Central Asia 2019-2025,” which may signify a higher U.S. profile in the region. Its principles include strengthening Central Asian states sovereignty, combating terrorist activity, promoting U.S. investments, and countering Russian and Chinese influence. Nonetheless, there has not yet been a major U.S. initiative regarding either Central Asia or the South Caucasus. Democratic leaders also have not signified that the Caspian region will become a greater concern in their future policies.

Thus far, China has continued to defer to Russia’s military primacy in the Caspian. For instance, the PRC has limited arms sales to many Caspian states out of deference to Russia’s leading military position in the region, instead providing mostly internal security and counterterrorism goods and services. According to SIPRI, only Kazakhstan and Uzbekistan have purchased major weapons systems from China in recent years. Whereas Kazakhstan bought $23 million worth of arms in 2018, it purchased $267 million worth of Russian weapons in the same year.

But China has striven to deepen energy, economic, cultural, and educational ties with the Caspian region. Most recently, Beijing’s Belt and Road (BRI) Initiative has contributed to amplifying the PRC’s economic prowess in the region. BRI-related projects have injected hundreds of billions of dollars of Chinese capital into regional transport, communication, pipeline, and other projects. China’s presence has grown substantially in Central Asia.

According to the United Nations Conference on Trade and Development, in 2019, Kazakhstan, the wealthiest Central Asian country, received $141 billion inward foreign direct investment (FDI) from China vs $31.7 billion from Russia, bringing its total stock on inward FDI from China to $1,769 billion, compared with $464 billion from Russia. According to the Observatory of Economic Complexity, in 2018, Kazakhstan exported $6.41 billion worth of goods to China (10% of its total exports) vs. $5.28 billion to Russia (8.24%), while importing $13 billion from Russia (34.6%) vs $8.71 billion from China (23.1%). For Uzbekistan in 2018, that most populous Central Asian country exported $2.24 billion to China (23.6%) vs $1.64 billion to Russia (21.3%), while importing $3.78 billion from China (20.9%) vs $3.33 billion (18.3%) from Russia. In contrast, Russia still enjoys economic primacy in the South Caucasus. For example, in 2018, Azerbaijan imported $1.88 billion from Russia (15.8%) vs $647 million from China (5.66), while exporting most of its oil to EU members. Even Georgia, despite its strained ties with Moscow, exported twice as much to Russia vs China in 2018 (11.5% vs. 5.65%), though its imports were more balanced (10.8% vs. 10.1%). Given Moscow’s inability to counter Chinese economic penetration, Russian officials have proposed linking these efforts with other non-Western regional integration initiatives in an ambitious plan to form a Greater Eurasian Partnership. In May 2018, the EEU signed an Economic and Trade Cooperation agreement with China. PRC leaders have publicly backed this objective of expanding ties, though evidence of actual cooperation on concrete projects remains minimal.

Besides expanding the number of EEU members and deepening their level of engagement, Moscow is also developing ties between the EEU and important non-member countries outside of China, including India. In December 2019, Nikolai Kudashev, Moscow’s Ambassador to India, reported that Russia sought a free trade deal between India and the EEU. Earlier, Moscow successfully lobbied to raise India’s status to that of a full member within the Shanghai Cooperation Organization, which may dilute Beijing’s premier influence in that organization.

Conversely, Russia does not perceive Iran as a major challenger to its interests in the Caspian region. The Iranian government has not overtly challenged Moscow’s interests in the South Caucasus and Central Asia. Moscow and Tehran have worked out a modus vivendi regarding the delineation of boundaries and commercial use of the Caspian Sea. Iranian-Azerbaijani tensions give Moscow leverage over Baku. U.S. sanctions on Iran have impeded the possible growth of economic ties between Iran and other Caspian states that was expected following the 2015 Iran nuclear deal. In 2019, the EAEU and Iran signed a free trade accord. The upcoming expiration of the UN ban on major Iranian weapons purchases have excited Russian arms dealers, who hope to again become a leading foreign supplier of advanced Russian weaponry. However, a major war in the Caspian regime could severely challenge Russia’s economic and security interests in the region. The same would occur should a pro-U.S. regime come to power in Tehran that would seek to align economically with Europe and militarily with the United States. Moscow will strive to keep tensions between Washington and Tehran high but manageable.

Some of the Caspian states could plausibly undergo major political transitions in coming years. The change that occurred in Uzbekistan a few years ago demonstrated how such transformations can induce major shifts in their domestic and foreign policies. Since Shavkat Mirziyoyev replaced Islam Karimov as president in 2016, Uzbekistan has adopted a more cooperative policy towards its neighbors and has reconciled with Moscow’s regional integration plans. The ongoing leadership transition in Kazakhstan offers new opportunities and challenges for Russian influence in the Caspian region. One advantage Moscow enjoys over Beijing is that, while the Caucasus governments are reluctant to challenge the PRC’s policies in Xinjiang (none signed the joint letter of July 2019 to the 41st session of the United Nations Human Rights Council that condemned them), many of their citizens sympathize strongly with Beijing’s harsh policies towards its Muslim minorities. This sentiment appears strongest in Kazakhstan and Kyrgyzstan, where many families have relatives living in China.

What remains unknown is how the Caspian states collectively will respond to Moscow’s changing policies in the region. They perceive Moscow as an important security and economic partner, as well as a critical balancer to China’s overwhelming demographic preeminence and heavy-handed anti-Uighur demands, but also as potential threat due to Moscow’s aggression in Georgia and Ukraine and anti-Western paranoia. Intraregional cooperation has increased in Central Asia, thanks to Uzbekistan’s more cooperative approach, but not in the South Caucasus, where the Nagorno-Karabakh dispute presents an ineluctable obstacle. The decreasing value of their energy exports and the COVID pandemic has, at least in the short term, directed Caspian government’s strategic attention inwards. Even in the long term, Russia will face major challenges crafting robust control frameworks in the region.