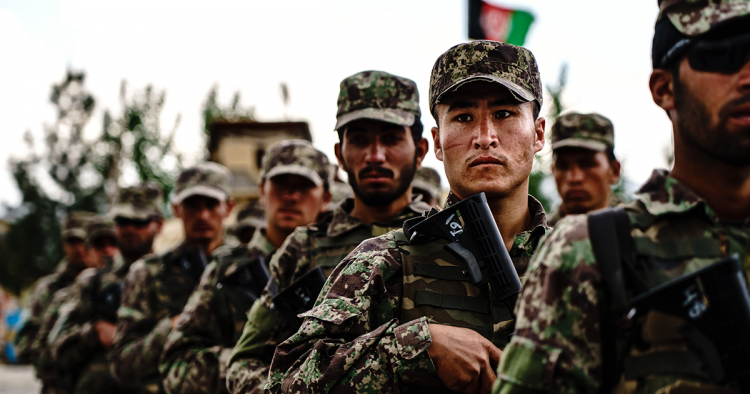 Even the most ardent supporters of President Joe Biden’s decision to withdraw all American troops from Afghanistan recognize the inherent tension in his policy.

Biden promised Afghanistan’s top leaders in a recent meeting at the White House that he would maintain U.S. material support to the country. But ensuring a “sustained” partnership with a politically fragile Afghan government requires first and foremost an Afghan force that’s capable of defending that government, providing some security across the country, containing the Taliban, and preventing terrorists from once again setting up shop and plotting attacks worldwide like they did on 9/11.

This all depends to some extent on the presence of American trainers, advisers, and contractors on the ground whose role would be to enable the Afghan military to achieve these objectives.

Yet Biden, it seems, is pulling out all those U.S. personnel too, forcing U.S. Central Command (CENTCOM) Commander Gen. Frank McKenzie to figure out how to continue assisting the Afghan military through an “over-the-horizon” approach – i.e., largely from outside Afghan territory.

If the Afghan National Army can’t stand on its own feet — and there are signs already of it experiencing serious technical and operational difficulties due to the dramatically rapid and comprehensive decline in U.S. support — then there really is no partnership for the United States to uphold with the Afghans and all that optimistic talk by Biden about strengthening or retaining ties with Kabul is just empty rhetoric.

Gen. McKenzie said that it’s extremely hard but not impossible to pursue an over-the-horizon counterterrorism U.S. strategy, especially if we keep the U.S. Embassy and secure better access and basing in neighboring countries. He holds the same view on the U.S. train-and-equip mission with the Afghan army.

Currently, the entire U.S. national security bureaucracy, and particularly that of the Defense Department, is frantically working on identifying what resources, laws, authorities, and procedures are needed to make this all happen. We’re learning as we go.

But it wouldn’t be unreasonable or unduly cynical to suggest that an over-the-horizon military assistance approach will face monumental logistical and security challenges for at least two reasons.

First, depending on how one defines over-the-horizon support, the Pentagon has never done this before with any of our weaker partners across the world, at least not overtly on such a large scale, with so much U.S. equipment involved, including sophisticated air assets.

We smuggled billions of dollars in weapons into the hands of the Afghan mujahideen in 1979-89 to bleed the Soviet troops, but that was a covert operation led by the CIA and back then we didn’t care much about building a national Afghan army. All we really wanted was to drive the Russians out of Afghanistan.

We tried a much smaller version of over-the-horizon support in Hungary in 2003 with the so-called Free Iraqi Forces, in Jordan in 2013 with Syrian rebels, and to some extent in Yemen, but these efforts were less than effective and again in no way comparable to what we would be doing in Afghanistan.

Whether it’s in Asia, Latin America, Europe, or the Middle East, we’ve almost always been physically present in the partner nation, engaging openly, directly, and often consistently with its military and political leadership. In Afghanistan, the learning curve is going to be immensely steep, something U.S. officials are appreciating at this very moment.

Second, we couldn’t turn the Afghan army into a competent force when we had thousands of U.S. soldiers stationed in the country, billions of dollars, and more than 20 years to do it. You think we’re going to do any better by pursuing this remotely?

Yet as unlikely as success is, I agree with Gen. McKenzie that it’s not impossible — on one condition: that Biden approves keeping American advisers and security cooperation officers in the country. Not the thousands of American combat troops that were there before the withdrawal began, but the hundreds of specialists who have credible expertise on helping foreign partners better operate U.S. military equipment.

That is the military posture we should have had in Afghanistan all along (which we’re also trying to erect in Iraq and elsewhere in the region): not a bloated armed presence tasked with chasing deeply-rooted Islamic militants and policing the country, but a lighter footprint focused on enabling CENTCOM’s very own “by, with, and through” approach.

Again, such an advisory presence, based in the U.S. Embassy, need not be large but it would certainly require force protection whenever it’s on duty — meaning American servicemen and women traveling with them and shielding them with guns.

This will go against Washington’s agreement with the Taliban, but that shouldn’t be our top concern. Biden must insist on this issue because it’s our only shot at protecting our core interests and not totally surrendering our position in the country.

It’s not like the Taliban have honored the deal themselves. They haven’t stopped attacking Afghan security forces and civilians and they haven’t cut ties with al-Qaeda and other terrorists, according to the U.S. intelligence community.

To be sure, even with the presence of U.S. trainers and advisers, the job of ensuring the survival and adequate competency of the Afghan army will be incredibly difficult. Political dysfunction and corruption in Kabul will continue to be huge obstacles. Afghan soldiers, many of whom are unskilled, illiterate, and unmotivated, also will be fighting for their lives as the Taliban wages its expected offensive in the spring.

Moreover, any residual U.S. presence we will retain in Afghanistan is likely to become the single focus of attack by insurgents and terrorist elements across the country. These U.S. advisers and their protectors might end up spending more time defending themselves than doing any actual good for the Afghan military. That’s a risk that’s worth considering, but it’s not unmanageable.

Let’s be crystal clear: we’ll never be able to help the Afghans achieve the crucial goal of sustainment (i.e. the ability to effectively absorb and eventually graduate from U.S. assistance through investments in institutional capacity building and defense governance), but we can make sure they at least have some ability to properly fly their planes, drive their trucks, and shoot their rifles.

This would be a minimalistic and probably expensive mission with no clear endgame and a shortsighted whack-a-mole strategy — which is probably why Biden has determined there is no good option in Afghanistan and it’s time to take our lumps and move on.

But he’s wrong on this one. Afghanistan matters primarily because U.S. influence in South Asia — a region that’s highly relevant to great-power competition given Russia and China’s strategic equities there — matters.

So, Mr. President, if you wish to effectively pursue the objectives you laid out yourself in your April 14 speech, please keep the American military advisers in Afghanistan. It’s a low-cost approach that can prevent the worst and keep us from having to go back in with a heavier footprint.

Bilal Y. Saab, a former Pentagon official with oversight responsibilities for security cooperation in the broader Middle East, is a senior fellow at the Middle East Institute. The opinions expressed in this piece are his own.