NATO and its Eastern Flank: Challenges of a post-COVID environment 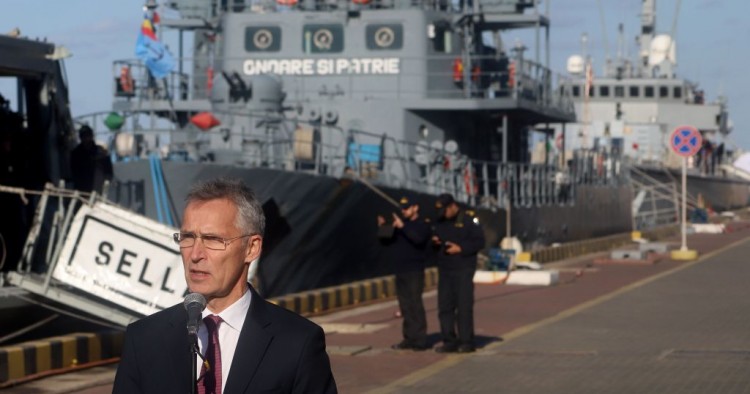 NATO Secretary General Jens Stoltenberg recently urged that the current health crisis should not become a security crisis. To stay secure in the years to come, the Alliance must become more resilient and ready to meet the challenges of a post-COVID environment. This is especially true for the most vulnerable part of the Alliance – its Central and Eastern European (former Communist) member countries. They require increased attention and enhanced support from NATO’s most powerful and capable allies – the United States in particular. Shifting NATO’s focus further to its Eastern Flank is the right path to take if the Alliance wants to be prepared for the challenges of the 21st century, exacerbated by the long-term impacts of COVID-19.

COVID-19 poses a new set of security challenges. Shocks caused by the pandemic open new areas of vulnerability for the Euro-Atlantic family, many of which could be exploited by Russia and China through hybrid campaigns. Resilience to hybrid activity is critical to ensuring states are prepared for all military challenges.

The 2015 NATO strategy on countering hybrid warfare must be updated to incorporate lessons learned related to COVID-19 and intensified Russian and Chinese hybrid activity against NATO, EU and their member states. Priority must be placed on building sufficient capabilities within the NATO Eastern Flank, equipping the most exposed states to be resilient against hybrid risks and threats.

Sufficient defense funding in a transformed, post-COVID security environment is critical if NATO Eastern Flank members are to meet their Article-5 and non-Article 5 obligations and commitments. For this reason, the Wales Summit Defense Investment Pledge (DIP) should be updated to reflect the new global economic outlook.

Agreed guidelines of allocating two percent of GDP on defense is valid only in the context of projected economic growth. Increased defense spending presumably means more and strengthened capabilities. However, with GDP falling, so too will defense spending (even if defense spending as a share of GDP increases). This is a real issue and would directly impact the funding allocated to capability building. In the event of an economic recession, the NATO-agreed DIP would not serve its initial purpose at all.

To avoid this scenario, all NATO Allies should consider pledging to increase defense spending in real terms, including in times of negative economic growth.

In this current environment, enduring pressure on defense spending will certainly be felt across NATO. Central and Eastern European Allies will likely be even more affected. They will need significant investment in new NATO-interoperable systems and platforms. These countries will have to simultaneously decommission inherited and obsolescent Soviet-made military equipment, which is consuming a good deal of their scarce resources.

NATO should prioritize building defense capabilities of its Eastern Flank member states. Given the shortage of funding, the only way forward is to share the burden of capability building. This would mean initiating and carrying out joint multinational capability building projects within the NATO framework, as well as the EU Permanent Structured Cooperation framework (provided there is no overlap).

Better spending thus means spending together and sharing capabilities. Joint capability development projects should become a priority. This is especially relevant in terms of ongoing military build-up of the NATO enhanced Forward Presence (in the Baltic Sea) and tailored Forward Presence (in the Black Sea), as agreed at the 2016 Warsaw Summit. This is an important component of NATO’s strengthened deterrence and defense posture that would allow it to meet any challenges from the East and a revanchist Russia, in particular.

This would ideally be conducted at a regional level to enable cooperation among allies in the Baltic Sea and Black Sea.

The Eastern Flank is the Achilles’ heel of the Atlantic Alliance and most vulnerable to Russian and Chinese subversive activity. China is seeking to penetrate Black Sea countries primarily through economic means, using foreign direct investments as its primary tool for ensuring long term impact. The COVID-19 crisis will cause further complications as it opens new opportunities for widening and exploiting Black Sea countries’ vulnerabilities.

The Alliance must invest in rearmament and enhancing the interoperability and readiness of Eastern Flank member states and partners. These allies should be seen as a single entity rather than two separate groups, as is now the case with the enhanced Forward Presence (eFP) and tailored Forward Presence (tFP). Russian military presence in the Black Sea is no less challenging for NATO than Russia’s Baltic Sea military potential. Russia’s Crimea and Kaliningrad military build-ups are two sides of the same coin. Russia sees its Western border as a single front, so there is no logic in NATO continuing to divide its focus in its Eastern flank – North and South, enhanced and tailored.

Investment in the NATO Forward Presences should be prioritized, emphasizing and raising the profile of the tFP with a view of establishing a NATO Single Forward Presence (transition from eFP and tFP to sFP).

Stronger deterrence would require an adaptation of the NATO Defense Planning Process, especially the Capability Targets of Eastern Flank members. Eastern military adaptation would be particularly useful in terms of prioritization of future military acquisitions, given these countries’ limited financial resources and the enormous investment needed for the rearmament of their armed forces. Prioritizing deterrence in defense planning – while focusing on cost sharing through joint capability building projects and joint defense investments – is the only feasible way forward for NATO Eastern Flank members in a post-COVID strategic context.

The armed forces of NATO Eastern European member states are hindered by their Soviet legacy, with capabilities and military readiness compromised. Allies should decommission the existing Soviet platforms and stop relying on Russia for maintenance and repair.

If decommissioning were to impact critical capabilities, an alternative would be to keep a required minimum of these platforms (while waiting for new NATO-interoperable equipment to arrive) but refrain from using Russian companies for repairs and maintenance. With Soviet systems unable to be modernized or upgraded at all, only urgent repairs of critically needed equipment should be considered, in case there is no other immediately feasible option.

It should also be made clear that going forward, there is no role for Russia or  China in maintenance, modernization, acquisition or investment in the defense industries of NATO countries. Enhanced focus should be on Beijing’s growing ambitions to penetrate the European defense market and defense industries.

Defense reform across NATO eastern members and NATO’s valuable partners in Eastern Europe is unfinished business, with the best results yet to come. COVID-19 presents new and complex challenges for both allied and national security and can be seen as a perfect catalyst for change. NATO undoubtedly must seek to bring change, particularly in Central and Eastern Europe, where defense institutions are still under-reformed and under-transformed. Rapid transformation of defense institutions will ensure states are better prepared in a security environment aggravated by COVID-19.

Successful transformation depends first and foremost on leadership. This is particularly true regarding strategic-level leaders. Even three decades since the fall of the Berlin Wall, communist legacy is still taking a toll. Reforms are slow and in some cases are incomplete or under implemented. NATO and the United States must show initiative in helping to strengthen post-Communist, strategic-level defense leadership across Central and Eastern Europe. This is particularly important for NATO partners in Ukraine and Georgia, two nations still challenged by Russian subversion.

A single and stronger NATO Eastern Flank requires all members of the European family to serve as an integral part of the Alliance. This means continuing an open-door policy with Black Sea countries aspiring to NATO membership. Ukraine and Georgia should be encouraged to continue on their road to NATO and EU membership and should be supported on defense reform and capability building. There is also value in applying lessons learned from previous Eastern NATO enlargements.

Moscow is building a strong military presence in the Black Sea. The strategic military balance in the region has been gradually and steadily shifting in Russia's favor, to the detriment of NATO and its member states. This is further evidence of the need bring Ukraine and Georgia closer to the Alliance with a view to welcome them as members one day.

Ambitions to one day establish a NATO Single Forward Presence from the Baltic Sea to the Black Sea will not be realized without integrating in a joint framework of practical capability development initiatives also Kiev and Tbilisi. Both partners are crucial to achieving this endeavor.

Observations made in this article are based on an Eastern European perspective and reflect the view of a Bulgarian defense expert. They are based on the experiences of the author, who has witnessed the defense transformations of NATO ally Bulgaria in an increasingly challenging environment. A national defense review is currently underway to ensure the country is equipped to meet, together with its NATO allies, the challenges of the strategic environment in the years to come.

Suggestions outlined by the author could provide a valuable resource for NATO and U.S. policymakers in developing a comprehensive strategy for NATO’s Eastern presence in a post-COVID environment.

Mihail Naydenov is a defense, national and international security expert. He has been a civilian expert at the Bulgarian Ministry of Defense since 2001. His areas of expertise include defense policy, analysis, NATO, EU/CSDP, speech-writing and conduct of Strategic Defense Reviews. Mihail also serves as a member of the Governing Board of the Atlantic Council of Bulgaria. The views expressed here are his own and do not necessarily reflect the official policy or position of the Ministry of Defense of Bulgaria or the Bulgarian government.