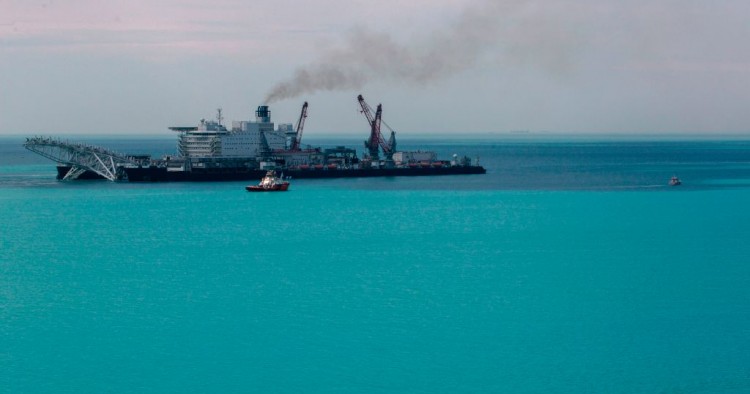 Heterogenous, varied, diverse – few other words can concisely describe the Black Sea region. Beyond their obvious geographical proximity, there is little that unites these countries. Wedged between different continents, religions, and cultures, they also vary in size, economic prowess, and geopolitical affiliation. Until 1991, the Soviet Union and its Warsaw Pact allies exercised de facto hegemony over the region, with Turkey as the lone littoral state outside the Communist bloc. Since the fall of the Iron Curtain, the region’s diversity has been a hurdle to collaboration.

After the collapse of the Soviet Union, Russia used its dominant position as a natural gas supplier to wield outsized influence in the region. But recent changes in the natural gas market have eroded that dominance. Under increasingly globalized and interconnected natural gas markets, Russia has been losing its ability to use its dominance as a gas supplier to influence the region geopolitically and economically. This allowed for Turkey’s quest to become the middle-man for gas supplies to Europe and strengthened the position of the region’s smaller countries. If these smaller countries band together, they can balance Russia’s power and provide a better basis for less tumultuous development in the region.

This paper defines the Black Sea region as the six littoral states of Bulgaria, Romania, Ukraine, Russia, Georgia, and Turkey, along with Georgia’s neighbors Armenia and Azerbaijan, and Moldova, wedged between Romania and Ukraine.

The institutional structure of the Black Sea region reflects its diversity and lack of clear geopolitical affiliation. Take the European Union: Romania and Bulgaria are EU members; Ukraine, Moldova, Armenia, Azerbaijan, and Georgia are part of the EU’s Eastern Partnership; although formally a candidate for membership, Turkey has de facto abandoned its bid to join; and Russia sees the EU as a political and economic competitor. And there is diversity even within these categories. Where Ukraine, Moldova, and Georgia strongly desire EU membership, Azerbaijan’s authoritarian form of government essentially puts its accession off the table; and Armenia’s membership in the Russian-dominated Eurasian Economic Union prevents it from joining.

NATO membership is similarly complex. Bulgaria, Romania, and Turkey are NATO members. In contrast, Russia sees NATO as a military adversary and seeks to prevent its further enlargement. Ukraine and Georgia both aspire to NATO membership. But even though the Alliance announced in 2008 they would become members, it withheld Membership Action Plans. Both countries were subsequently victims of Russian military intervention and currently have portions of their territory under Russian military occupation or – in the case of Crimea in Ukraine – outright annexation.  Moldova and Azerbaijan are also NATO Partnership for Peace members, but neither is a serious candidate for membership. Moldova’s neutrality – enshrined in its constitution – takes membership off the table. And Azerbaijan’s authoritarian form of government and its non-aligned position do the same. Finally, Armenia’s membership in the Russian-dominated Collective Security Treaty Organization – sometimes called the “Eurasian NATO” – prevents it from joining the original NATO.

The countries of the Black Sea region are also highly diverse when it comes to their natural gas endowment and consumption. But while diversity of cultures, languages, religions can create obstacles for regional unity, in natural gas it can become a key to collaboration. In the Black Sea this has become particularly true over the last several years. Advances in extraction (shale revolution) and liquefaction technology during the last decade created an increasingly global and liquid natural gas market where a rising number of suppliers vie for growing global demand. This allowed many natural gas importers to diversify their gas supply options and secure lower gas pricing. In the post-Soviet region, lower dependency on a single supplier has also undermined Russia’s geopolitical power. For the Black Sea countries, these elements can also provide a basis for better integration and regional cooperation.

How? Let’s begin by considering the diversity of natural gas endowment in the region.

Russia’s enormous natural gas endowment and its status as a major natural gas exporter make it a logical place to start. In 2019, Russia exported almost 200 billion cubic meters (bcm) of gas, most of which reached Europe (including Turkey). Azerbaijan is the only other significant natural gas exporter in the Black Sea region, where the Shah Deniz condensate and natural gas field was discovered in 1999. Exports began in 2006 and have grown progressively to now total over 12 bcm.

Romania – third in Europe for natural gas endowment – is another producer in the region but does not export gas. It is close to self-sufficiency, with only negligible amounts of gas imported from Russia. Romania could start exporting gas if it successfully developed its offshore natural gas resources in the Black Sea. In contrast, Ukraine’s domestic gas supplies are insufficient to support the country’s demand and, in the short-term do not present an opportunity for supply build up. Imports currently constitute approximately 30 to 40 percent of the country’s natural gas supply. The remaining Black Sea countries rely on imports as they produce either negligible amounts of gas (Turkey, Bulgaria) or do not produce gas at all (Georgia, Moldova, Armenia).

Russia’s role as the traditional – and usually monopoly – supplier in the region has allowed it to accrue significant economic and geopolitical benefits. Turkey has been the exception. As a large market that also receives gas from Iran, it has had a relatively strong bargaining position vis-à-vis Russia.

Other regional importers were not able to improve their bargaining positions until very recently when new supply options – Azeri gas and LNG – entered their markets. Following conflict with Russia in 2008 and difficult relations thereafter, Georgia moved to replace Russian gas entirely by Azeri gas (though some Russian gas began to flow to Georgia in 2019, volumes have been relatively small). This is good news for Armenia, which continues to rely completely on Russian gas but has a mutual support agreement with Georgia in case of shortages. Ukraine, following Russia’s invasion and annexation of Crimea, does not import Russian gas directly but rather via reverse flows from Slovakia, Hungary, and Poland. Moldova is eying similar options as it continues to rely on Russia for all 3 bcm of its demand. Bulgaria recently ensured access to alternative supplies from LNG imports to Greece and has also agreed to purchase a 20 percent stake in a new LNG terminal there. The country plans to shift about half of its supplies away from Russia after new infrastructure is completed this year.

LNG import terminals and pipelines have played a crucial role in breaking the region’s reliance on Russian gas. Turkey has been able to build LNG import capacity, enabling it to ramp up LNG to nearly 25 percent of its total gas imports in 2019. The country currently houses four terminals – two onshore and two floating units (FSRU), with a third FSRU planned in the Aegean. Storage is another piece of the diversification puzzle. Turkey is expanding its storage and has just broken ground at Lake Tuz on currently the world's largest storage project under construction, which will eventually hold up to 5.4 bcm of gas. Bulgaria and Ukraine already possess significant storage sites and could possibly offer them to other countries. Moldova is looking into accessing Ukraine’s storage for security of supply as Russia remains its lone gas source.

All these changes in the natural gas market, if exploited, have true potential to increase Black Sea cohesiveness, collaboration and ability to accrue regional benefits.

First, new market forces have effectively reduced the extent to which the region is reliant on Russia for natural gas. Under the Soviet Union, Russia’s monopoly provided it with what international relations scholars refer to as a ‘hegemonic position’. During the post-Soviet years Russia’s political position weakened and Turkey became a balancer in the region. Russia has continued to influence the remaining countries, with natural gas treated as an important element of its geopolitical strategy. Although it may not end Russia’s ability to use gas as a geopolitical tool, diversification of suppliers significantly erodes Moscow’s dominant position.

Second, Turkey has risen in importance, as a sizable natural gas market with an increasing amount of competing supplies. Turkey’s main goal is to become a powerful middleman in natural gas supplies for Europe. The government has been vocal about its ambition to become Europe’s hub for natural gas. Development of pipelines, LNG terminals and storage has been a direct extension of this policy. In geopolitical terms, this would help Turkey’s position vis-à-vis Europe, as well as its position in the Black Sea region.

Third, the transformation of the natural gas market in the Black Sea region can become an anchor for the smaller countries to unite in balancing Russia and Turkey. These countries can now access new sources of demand for natural gas but should also create a well-connected, regional market where natural gas can be easily moved wherever a shortage occurs. They should also use their status as transit territories for the two new pipelines in the region – Russia’s Turkstream and TANAP. Transit is not only a good source of income, but can also increase their bargaining position against Russia as a supplier and Turkey as a middleman and hub.

Looked at through the prism of international relations, these developments bode well for the emergence of better cooperation in the region. If we assume, as realists do, that power is the currency of international relations, the erosion of Moscow’s hegemonic position as a gas supplier should lead to a more stable, trilateral balance of economic power among Russia, Turkey and the smaller Black Sea countries. This balance is particularly crucial as some scholars contest the liberal idea that trade promotes peace, arguing that trade can actually make conflict more likely if one country is dependent on the other for a critical commodity. The international relations schools of institutionalism and constructivism would also see these developments as positive. Institutionalists would argue that increased interaction among regional countries in the gas market would “lengthen the shadow of the future” – the idea here being that in frequent interactions the incentive to cheat is lower than in a one-time interaction.  Constructivists would note that identities change with interaction, and increased win-win interactions in natural gas markets can cause the countries of the region to begin to see themselves as partners.

Realists might remind us that in the end states seek security, so we should temper our expectations about the extent to which emerging natural gas cooperation can resolve the region’s intractable problems such as the frozen conflicts in Azerbaijan, Georgia, Ukraine, and Moldova, or the increasingly tense relationship between Russia and NATO.  While this is true, the emergence of the Black Sea region as a gas transit and storage power would certainly act as a shock-absorber, so that when the inevitable geopolitical conflicts emerge, the states of the region remember they have something to lose if they let these conflicts escalate too far. And that would be a win for them all.

Bob Hamilton, Ph.D., is a Non-Resident Scholar for Frontier Europe Initiative. He is also an Associate Professor of Eurasian Studies at the U.S. Army War College. Anna Mikulska Ph.D. is a nonresident fellow for the Center for Energy Studies at Rice University’s Baker Institute for Public Policy & senior fellow at the Kleinman Center for Energy Policy and Foreign Policy Research Institute. The views expressed here are their own.