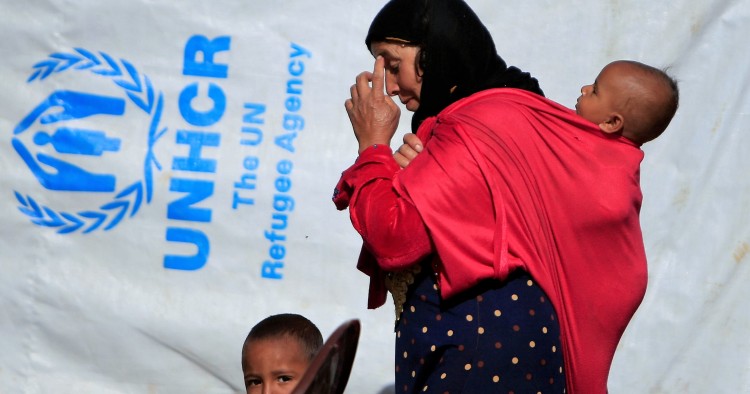 The majority of the world’s Syrian refugee population is hosted in countries that are either not party to, or have limited their application of, the core instruments of refugee protection: the 1951 Convention relating to the Status of Refugees and its 1967 Protocol. Some, such as Lebanon, do not consider themselves to be countries of asylum, and even lack meaningful national legislation for dealing with refugees. Yet, in the face of large refugee influxes, these same states are often highly dependent on the presence and operations of the United Nations High Commissioner for Refugees (UNHCR). In Lebanon, for example, UNHCR has been active since 1963, and during the Syrian refugee influx, it has strengthened its position as the primary provider for the country’s non-Palestinian refugees. Between 2012 and 2013, UNHCR’s Lebanon budget saw an unprecedented increase from $49 million to $362 million. [1]

This essay examines the humanitarian negotiation of protection in the Syrian refugee response. As I discuss in recent research, UNHCR’s operations have not been shielded from Lebanon’s unwillingness to host Syrian refugees.[2] In fact, Lebanon’s increasingly restrictive refugee policies have heavily affected UNHCR’s ability to execute its international protection mandate. One of the reasons for this situation lies in the challenges of formalizing UNHCR’s presence in the country, where, ever since the breakdown of a 2003 Memorandum of Understanding, new forms of cooperation have been difficult to formalize. This essay presents three examples of how UNHCR has negotiated refugee protection in Lebanon: by avoiding the refugee label, by establishing the contested notion of “protection space,” and by suspending refugee registration at the request of the Lebanese government.

The refugee label has been politically loaded in Lebanon for more than a half-century. I have elsewhere discussed in detail the key reasons why Lebanon seeks to avoid applying this label, and these include a fear that doing so would not only entail the permanency of refugees on Lebanese territory, but also trigger the application of the international refugee law regime.[3] With the influx of Syrians to Lebanon, discussions of how to label those seeking safety in the country were brought to a head.

In June 2012, Lebanon’s caretaker government established a policy of neutrality towards the events in Syria. One strand of this “disassociation” policy was the enforcement of the term “displaced persons” rather than “refugees.” The Lebanese government is also adamant about UNHCR not using the term “refugees,” and the initial ad-hoc registration was therefore simply of “Syrian citizens who have fled into Lebanon.” At the beginning of the Syrian influx, UNHCR sought not only to be flexible towards the Lebanese government, but also to maintain cautiousness with the Syrian government. UNHCR’s Syria office was one of its largest, providing protection and assistance to hundreds of thousands of — mostly Iraqi — refugees.[4]

As the refugee response intensified and became more conventional, UNHCR nevertheless found itself caught between the principles of international refugee law and local views on asylum. UNHCR increasingly employed the refugee category, though when faced with government criticism, also displayed pragmatism: “The important thing for us is the question of are people being protected [sic]. They are here. Whether they call them displaced persons or refugees, what this country has done should be held up as an example to the world.”[5]

Terminology has nevertheless remained a main point of contention in UN-government relations, evident not least in the drafting process of the 2015-16 Lebanon Crisis Response Plan (LCRP). To date, two LCRPs have been drafted: the first released in 2015 and the other in January 2017. These plans are part of the Regional Refugee and Resilience Plan (3RP) that addresses refugee protection and assistance needs in the entire region. The 2015-16 LCRP introduces various terms — including the curious notion of “de facto refugees” — to refer to persons who fled from Syria after March 2011:

Against this background, it is interesting to note that UNHCR has in fact not made any official declaration of prima facie refugee status for Syrians, in Lebanon or elsewhere. Prima facie refugee status is normally recognized on the basis of readily apparent, objective circumstances in the country of origin and is commonly used in mass influx situations around the world.[7] In the Syrian case, however, UNHCR characterizes the flight of civilians from Syria equivocally, referring to it as a “refugee movement.”

In contrast to prima facie refugee status, simply characterizing a flow as a “refugee movement” is not an established means of determining refugee status under international law.

I have elsewhere argued that UNHCR likely perceived the political costs associated with refugee status determination, however prima facie, to outweigh the potential protection gains.[8] It may also be a question of organizational efficiency, where UNHCR is increasingly and explicitly seeking to explore alternative protection strategies that do not require refugee status determination.

UNHCR’s practice in countries such as Lebanon furthermore suggests that the organization believes it can best offer protection on the ground by being pragmatic. This “pragmatic but principled” approach includes establishing an acceptable “protection space” for the country’s refugees.[9] This notion of “protection space” has been broadly understood by UNHCR to be “…an environment sympathetic to international protection principles and enabling their implementation to the benefit of all those entitled to protection.”[10] In Lebanon, it has included “strengthening institutional support for protection and community-based protection.”[11]

The approach has nevertheless been criticized not only for being vague and undefined, but also for privileging institutional interests and, as a direct result, sidelining refugee rights. Some critics have argued that the protection space approach, with UNHCR as the “negotiator,” devalues the normative strength of obligations towards refugees, and allows the underlying responsibility for the provision of refugee protection to “drift” from the state to UNHCR.[12] As legal scholar Martin Jones has argued, this is not to say that the negotiation of protection space does not achieve short-term results, but that “…notwithstanding any results which are achieved there are structural concerns which bias the types of short term results which are achieved and which undermine the achievement of long term results.”[13]

This protection space approach has meant that as long as Lebanon provides de facto protection to refugees, UNHCR will not pressure it into ratifying any international law instruments. It is therefore interesting to see that discussions of the issue of Lebanon’s accession to the 1951 Refugee Convention have been spearheaded, not by UNHCR as one would expect, but by other UN bodies. These have included the Committees on the Convention on Ethnic and Racial Discrimination (CERD), the Convention on the Elimination of All Forms of Violence against Women (CEDAW), and the Convention on the Rights of the Child (CRC). The Lebanese government has been feeling the international pressure to accede to the Convention; in October 2014, local papers reported how Lebanese ministers “thwarted an attempt to push Lebanon towards signing the 1951 Geneva Convention on the status of refugees” during the Berlin Conference on the Syrian Refugee Situation.[14]

The third example of UNHCR’s humanitarian negotiation of refugee protection is its compliance with the Lebanese government’s request to suspend the registration of new refugees. Registration procedures are a fundamental component of international protection, and, in 2013 and 2014, UNHCR registered on average 47,000 Syrian refugees per month in Lebanon. In April 2014, the one-million-registered-refugees mark was passed, and the Lebanese government took decisive action to exercise greater control over the Syrian presence. This included the adoption of a new policy on Syrian displacement aimed at decreasing the number of Syrian refugees in Lebanon by reducing access to territory and encouraging return to Syria.

Refugees who approach UNHCR after what is essentially a ban on registration are merely being recorded, i.e. only basic information and biometric data are collected in UNHCR’s Refugee Assistance Information System (RAIS) database. Refugee registration, in contrast, entails not only a “civilian character of asylum” screening, but also the collection of biodata (including religion and ethnicity), photographs, biometric data (iris scans), brief reasons for flight and fear of return, and copies of documents.

At the time of the suspension order, the UNHCR certificate provided to registered refugees had limited practical value for Syrian refugees in Lebanon. While it entitled refugees to international protection and humanitarian assistance, it did not normally confer any formal status recognized by the Lebanese government. Not long after the Lebanese authorities suspended UNHCR registration, however, the registration certificate became crucial for many Syrians to obtain legal residency in Lebanon.

A new residency policy for Syrians, which entered into effect in January 2015, provides two primary avenues for Syrian nationals to obtain residency: sponsorship as laborers by a Lebanese citizen or reliance on a UNHCR registration certificate. As such, registration and the UNHCR certificate can be said to now constitute “a semi-recognition of refugee status.”[16] What this has meant in practice is that when registration with UNHCR is no longer an option, Syrians cannot obtain a residency visa in Lebanon by way of a UNHCR registration certificate and are, instead, forced to secure residency as economic migrants, through the sponsorship system.

Making matters worse, the suspension order was also accompanied by a government-enforced practice of de-registering Syrian refugees. The details of this de-registration are far from clear, but questions have been raised as to whether the cases of the de-registered refugees were adjudicated fairly.[17] In the past, UNHCR has been criticized precisely for being “too casual” when it comes to taking refugee status away from people.[18]

UNHCR occupies a challenging place in the world today, not only being norm entrepreneur and supervisor of the 1951 Refugee Convention, but oftentimes the very agent through which refugee protection is offered on the ground. UNHCR’s international protection mandate is ever more challenging to implement in states that are not parties to the core refugee protection instruments. This essay has highlighted how, in the case of Lebanon, UNHCR is often caught between the principles of international refugee law, and the country’s own approach to asylum and Syrian refugees.

Due to the lack of any formalization of UNHCR’s presence, the legal mandate for its work in Lebanon has largely been left undefined and the organization has become increasingly exposed to governmental interference in its operations. In such circumstances, refugee protection has become negotiable, evidenced in the case of Lebanon by weighty discussions concerning terminology, the ambition to establish a pragmatic “protection space” rather than a principled stance to refugee protection or refugee rights, and, finally, the suspension of refugee registration.

Empirically, it is difficult to say how such negotiated protection has increased the de facto protection of Syrian refugees in Lebanon. What research on the ground does show, however, is that while many Syrian refugees in Lebanon are registered with UNHCR, many others suffer a much more ambiguous legal status. The latter population appears to lack access to the international protection ordinarily afforded refugees. This would suggest that there is a real risk that too much pragmatism may come at the expense of core international legal norms and humanitarian values.

[10] Erika Feller, “Protecting People in Conflict and Crisis – Responding to the Challenges of a Changing World” (Opening Address) at the Humanitarian Space conference at the Refugee Studies Centre, Oxford (October 2009) 5.