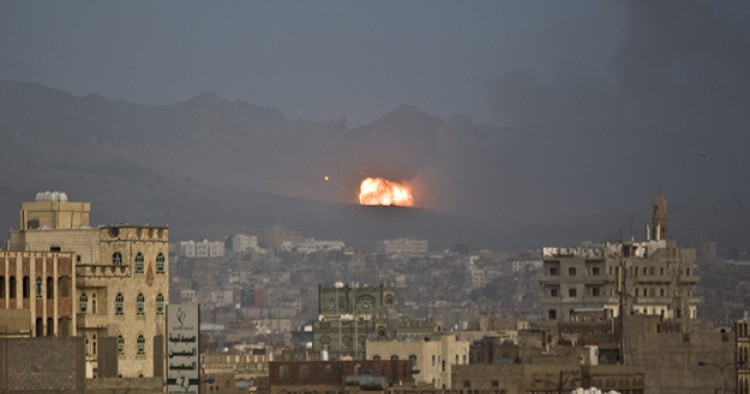 After initially rejecting the UN call for talks, the Saudi-backed Abdu Rabbu Mansour Hadi faction reversed its position and agreed to meetings in Geneva on June 14. Secretary General Ban Ki-moon had called for negotiations between all Yemeni factions without preconditions and insisted that the only solution to Yemen’s crisis is political talks.[1] The Iranians, Ali Abdullah Saleh, and the Houthi leader Abdel Malik al-Houthi agreed, but the Hadi faction feared that UN talks would legitimize the current dominance of the Houthis, Saleh’s forces, and their Iranian friends.

Hadi had insisted that the Houthis implement UN Security Council Resolution 2216, which calls on Houthi forces to withdraw from all Yemeni cities and return all equipment taken from the Yemeni military before talks can begin. Knowing that the Houthis would not agree to these preconditions, Hadi and his Saudi allies sought to change the balance of power in Yemen by giving more time for the armed resistance to achieve what the Saudi-led air campaign—dubbed Decisive Storm—had not. Whether a result of U.S.-led talks in Muscat or a realization that the resistance forces inside Yemen would not be able to make substantial gains, Hadi and the Saudis have now agreed to the meetings.

On May 23, with Saudi permission, an Omani plane carrying top Houthi negotiators, including the head of the Houthi political office and the Houthi official spokesperson, left Yemen for Oman.[2] Reports said that the Iranian foreign minister met with the delegation while concluding a treaty with Oman and that the Omanis were working to forge a cease-fire in Yemen. But the main negotiators appeared to be American. The U.S. State Department’s head of Near Eastern Affairs, Anne Patterson, held talks with Houthi representatives as well as representatives from the south. The talks seem to have facilitated the return of the Saudi side to the negotiating table, but large obstacles remain before any settlement can be reached.

The Houthis and allied Saleh forces are physically isolated by the naval and air blockade and diplomatically isolated by international support for Hadi, but they still control much of Yemen. They want to guarantee their security in post-war Yemen and their political weight in the north. After surviving the punishing air campaign, the Houthis will have little trust in the Saudis or their supporters in Yemen. The Saudis and their Yemeni allies want to reestablish the GCC initiative in Yemen, restore Hadi as head of government, and demilitarize the Houthi movement.

At the moment, the Houthis have little incentive to demilitarize. In the south, most of the resistance rejects negotiations before implementation of UN Resolution 2216, which calls for the withdrawal of the Houthis, but the south also rejects the Hadi government.[3] The wide gulf between these positions presages lengthy negotiations without much relief on the ground, where a massive and rapidly developing humanitarian crisis is brewing.

For the Saudis, the war is not about Yemen per se, but about rolling back Iranian influence, beginning with Yemen and the installation of a friendly regime there. The Saudis not only reject the Iranian presence in Yemen, but they also want to reverse the Houthi overthrow of the Hadi government and the Houthi reordering of Yemen’s political landscape. In the north, the Houthis cultivated alliances with those opposed to the al-Ahmar leadership of the Hashid tribal confederation and to the Islah Party. The Saudis would like to reinstall the al-Ahmar leadership and reestablish Islah’s role in Yemeni politics.[4]

Significantly, Islah is the only Yemeni political party that formally declared its support for the Saudi-led military campaign. Mohammed Ali al-Maqdishi, an associate of Ali Muhsin al-Ahmar, a pillar of Islah who fled to Saudi Arabia in September last year, is heading up efforts to rebuild a Yemeni military allied with the Saudis, dubbed operation Decisive Swords.[5]

The Iranians have actually only a limited role in Yemen.  After the Houthis took Sana, the Iranians established commercial air links with Yemen and promised a large-scale aid and development program, but the air links materialized only for a short period before the airport was shut down by alliance airstrikes. Iranian ships steaming to Yemen were turned back by U.S. warships in the Gulf of Aden. News outlets supportive of the armed resistance inside Yemen occasionally report on the killing, capture, or sighting of Iranian military advisors, but reliable evidence of Iranian participation in the fighting is scarce. The Iranians are the Houthis’ only international ally, and they have urged Yemen’s warring factions to go to the negotiation table.

The Saudis, attempting to forestall UN negotiations, had originally convened their own version of negotiations in Riyadh in mid-May that did not include the Houthis or Saleh’s allies. The conference’s final statement states that Sadah must return to its pre-2004 condition.[6] The Saudis initially scuttled UN efforts at negotiation in the hope of building an effective ground force in Yemen to defeat Saleh and the Houthis, as the Saudi-led air campaign has failed to significantly reverse the Houthi military grip on most of Yemen’s cities. Houthi and allied forces remain entrenched in Aden, Lahj, Taiz, Shabwa, and Abyan. Local resistance has slowed the Houthi advances in many areas and has even reversed Houthi gains in some places such as Dhali‘, but the air campaign has not prevented the Houthis from resupplying their forces and pressing their campaign south and east.

Resistance to the Houthi and Saleh forces is weak. In Aden, weapons delivered to the resistance from the Saudis reportedly ended up on the black market, where the resistance was forced to buy the weapons. In Taiz, resistance fighters on the strategic Jabal Sabir withdrew after they exhausted their munitions and appeals to Riyadh for resupply were not heeded in time.[7]

But more critically, the resistance lacks coherence. Most of the fighting is in the south, where people are ambivalent about Hadi’s leadership and skeptical of Riyadh’s intentions. Hadi made many promises to the south during his tenure under the GCC-backed transitional process, but delivered very little. The Southern Movement, or Hirak, leaders are divided. Some see the Houthi invasion as another northern invasion of the south and are fighting, but others are quiet or even supporting the Houthis. One Hirak leader called Hadi’s new military in the Hadhramaut a “danger to the south,”[8] and now some Hirak leaders are rejecting Hadi’s participation in the Geneva talks because they claim that the Houthis will only exploit the talks to consolidate their military dominance of Yemen. Though former President of South Yemen Ali Salem al-Beidh recently switched allegiance and went to Riyadh, he refused to attend the Riyadh conference along with many other southern leaders.

The Yemeni military in the eastern desert, formed to begin the ground offensive, includes many of the very leaders who conquered the south in 1994 and caused the havoc that has yet to be resolved.[9] In the rest of Yemen, Hadi’s coalition of those dispossessed by the Houthis includes many who were part of Saleh’s old order who switched sides at the last minute as Saleh sank. Replacing the Houthis and Saleh with another dysfunctional regime, but one more aligned with Riyadh, is not an appealing political agenda for many Yemenis.

However, the Houthis’ oppressive rule is certainly not an appealing alternative. The Houthis are subjecting their political opponents to the harsh treatment that they themselves were subject to during the wars in the 2000s. The Houthis have systematically kidnapped political opponents, blown up houses and mosques, and repressed journalists and news sites opposing them. The Houthis even used prominent Islah leaders as human shields. Ameen al-Rajawi, head of Islah’s political office, was killed in a Saudi airstrike in Dhamar while being held by the Houthis.[10] Though the Houthis came to power promising to implement the outcomes of the National Dialogue and overcome the corruption and incompetence of the Hadi government, Houthi behavior demonstrates clearly that the Houthi revolution is about Houthi power rather than a change in the style of politics in Yemen.

Moreover, Yemenis are suffering from both the coalition bombardment and the blockade that prevents the importation of food, medicine, and fuel. Thus far the relief efforts have yielded little for most Yemenis. Supply ships have mostly docked at Hodeidah, where the Houthis control the distribution of supplies, and the southern regions most affected by the fighting have seen little in the way of relief.  People are using donkeys for transport in Sana because of the lack of fuel.  The governor of Hadhramaut, Adel Bahamid, warned of imminent collapse of the governorate under a heavy burden from refugees fleeing the fighting and a rapidly spreading health crisis, including the spread of dengue fever. Bahamid was forced to flee Hadhramaut’s capital, al-Mukalla, after al-Qa‘ida took control of the city.[11]

At best, the Geneva talks will allow space for more effective relief efforts to alleviate Yemen’s acute suffering. A political settlement faces many difficult challenges and will require many long months of hard negotiating. The war has effectively divided Yemen into a Houthi-controlled zone, a zone dominated by the southern resistance, and a third region consisting of the eastern desert and the middle regions of Taiz and Ibb. Leadership of the Houthi region is clear, but competing and still evolving factions contest leadership of the other two zones. A political settlement that allows rebuilding a national military, ratifying a constitution, agreeing on an electoral commission, and holding legitimate elections is still too far on the horizon to discern with any clarity.

[10] “Islah in Dhamar Denounces the Houthi Crime against the Martyr Rajawi and Journalists and Demands an International Investigation,” Sahwanet, June 3, 2015, http://www.alsahwa-yemen.net/subjects.aspx?id=48003.