No Winners in Yemen 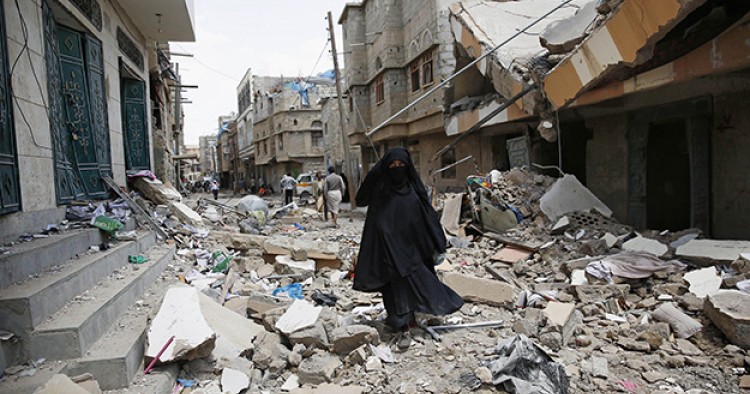 Hadi flip-flopped again. On Thursday, September 10, Yemeni President Abdu Rabbu Mansour Hadi announced that the government would meet with the Houthi rebels directly and without any conditions at the UN-sponsored negotiating table. As the military buildup for the assault on Sana reaches its final stages, Hadi’s announcement came with a sense of relief that Sana, having endured six months of bombardment from the Saudi Air Force, would be spared a ground assault. But two days later, Hadi reversed and said that the government would not meet with the Houthis until UN Resolution 2216 is implemented in its entirety. The resolution calls on the Houthis to withdraw from cities and government institutions and to return its heavy weaponry to the official Yemeni military, presumably the new one that the Saudis support in the eastern desert and not the bulk of the Yemeni military loyal to Saleh. Hadi’s flip-flop is not unusual. Throughout 2014, Hadi signed multiple agreements with the Houthi leadership, only to renounce them when he fled to Aden early in 2015. But Hadi’s vacillation this time reflects a wider debate among the Yemeni leadership in Riyadh, the Saudi leadership, the UN, and the United States about how to end the Yemeni conflict.

UN Secretary General Ban Ki-moon maintains that the only solution to the conflict is political. His special envoy, Ismail Ould Cheikh Ahmed, tirelessly shuttles between Muscat, Sana, Riyadh, and New York to promote political negotiations. The Saudis are not interested in negotiations, as they seek a military victory that will deny the Houthis a role in determining Yemen’s future. For the Saudi leadership, the war is not about Yemen but about Iranian influence in the Arab world; in other words, in Saudi eyes, the Houthis are not Yemeni, but agents of Iran in Yemen. The United States prefers a negotiated solution to the conflict, but the U.S. government is torn between its desire to stabilize Yemen through negotiations in order to focus on the threat of al-Qa‘ida and ISIS and its desire to show support for its Saudi ally. With the goal of dispelling Saudi doubts about the U.S. commitment to Saudi security, the United States refrains from publically criticizing the Saudi intervention, pushes for a negotiated solution only through back channels, and resupplies the Saudi military with equipment and ammunition to maintain the war. While the UN position and concern for Yemen’s humanitarian crisis affected Hadi’s decision on Thursday, by Saturday the Saudi position had gained the upper hand again, and preparations for the assault on Sana quickened.

However, it is not clear that the Saudi position is tenable; the Saudis face a more formidable military challenge in the north than in the south, and the Saudis’ pursuit of military victory will deepen Yemen’s political crisis rather than settle it. The Saudis accuse the Houthis of coming to power by the use of force, and hence the Saudi solution to the Houthi problem is to reverse the military balance of power. But Houthi power is not simply military; the Houthis built a solid political foundation in opposition to the Saudis’ political supporters in the north. The Saudis considered the Islah Party and its allied military units under Ali Mohsin, the al-Ahmar family’s leadership of the Hashid tribal confederation, and the Salafi movement in Yemen important bulwarks, first against communist aggression during the Cold War and then against anyone else who might challenge Saudi interests in Yemen. The Houthis rose due to dissatisfaction with this coalition.[1]

The Houthis then greatly expanded their political reach with an alliance with their former enemy, Ali Abdullah Saleh, after Saleh was driven from power in 2011. It was the Saudi supporters in Yemen who undermined Saleh’s regime, and it was the Saudi-backed GCC agreement that cemented Saleh’s departure from politics. In 2014, the Houthis and Saleh took advantage of the failure of Hadi’s transitional government to address the pressing issues of political paralysis and economic deterioration to evict Saudi backers from Sana. Saleh still commands considerable support, particularly in the military, but also among political centrists not enamored of Islamic or leftist politics. The Houthi alliance with Saleh comprises a substantial proportion of Yemen’s political spectrum.

In pursuit of their regional quest to limit Iranian influence, the Saudis want to install a Saudi-backed regime in Sana. The Saudis first tried to force the Houthis and Saleh into submission with a naval and air blockade and air attacks on Yemeni military installations. It quickly became apparent that the air and sea blockade was insufficient, and the Saudis and Emiratis began to recruit and build a new Yemeni military with loyal remnants of the old Yemeni military and new recruits from the east and south of Yemen. Predictably, Saudi supporters who were evicted from Sana by the Houthis and Saleh command the military in the eastern desert. Hashem al-Ahmar of the Hashid tribal confederation has a prominent role in the Saudi-backed military, and Mohammed al-Maqdashi, an associate of Ali Mohsin, is the Yemeni Chairman of the Joint Chiefs of Staff.

The invasion of Sana may not be as successful as the campaign in Aden. Thus far, the Saudi and Emirati campaigns are in territory hostile to the Houthis. The southerners were not seduced by the Houthi offers of self-rule and fiercely resisted Houthi incursions. Though the southern Hirak was, like the Houthis, a movement of opposition to the Saleh regime, southerners saw in the Houthis another northern invasion rather than an ally. Hirak’s militias in Dhale and Aden, and similarly organized units in Taiz, held out though they were vastly outgunned and outmanned by the Houthis. Saudi and Emirati forces and supplies landed in Aden to turn the tide against the Houthi advance and allowed the southern resistance to retake all of the southern governorates. Similarly, the sparsely populated eastern desert is an Islah stronghold and also fiercely resists Houthi military advances. In the northern highlands, the Saudis will find a less willing coalition. The Houthis and Saleh command considerable support there, and not because of the Houthi leaders’ membership in respected Zaydi families. Houthi support is less about religion and more about politics; for many, the Houthis and Saleh provide credible alternative leadership to those in the Saudi-backed groups. Many opposed to Islah, al-Ahmar, Ali Mohsin, and the Salafis will support the Houthi-Saleh alliance.

However, Houthi support has certainly eroded since the group took power in January. The economy is sinking into a humanitarian crisis of its own, and the war is destroying much of the country’s basic infrastructure. Though Saudi warships and planes implement the blockade and drop bombs on Sana, the Houthi regime clearly contributes to the political crisis. The Houthis behave with blatant disregard for the rule of law, and hence do not represent a fundamental change in government, in spite of Abdul Malik al-Houthi’s claims in his long speeches. The Houthis imprison opposition members from the Islah Party and journalists critical of them. They, like the Saudis, regularly destroy the homes of opposition leaders or their families.

The problem for the Saudis is that erosion of support for the Houthis does not translate into support for the Saudi invasion. Tawakkol Karman, the Nobel Prize winner for her leadership of the Arab Spring, is a member of the Islah Party and is supportive of the Saudis in general, but she refuses to support the Saudi military campaign. She is a fierce opponent of Saleh and the Houthi coup, but she, like many in Yemen, does not see the Saudi campaign as a solution. In the south, where the resistance to the Houthi-Saleh alliance won, Hadi’s Saudi-backed government is struggling. The victory in the south was not the work of Hadi’s government or its military, but a result of southern militants, most of whom call for an independent southern state. Hadi is trying to incorporate southern militants into his new Yemeni military, but even supportive military leaders in the south warn that the liberated zones risk falling into the rule of competing militias, like in Libya. The Saudi choice of a military solution is even more likely to produce such a risk in the north.

[1] However, see Bonnefoy for a more nuanced view of the politics of the Salafi movement in Yemen. Laurent Bonnefoy, Salafism in Yemen: Transnationalism and Religious Identity (Oxford, UK: Oxford University Press, 2012).