Obstacles to Civilian Control of the Security Sector in Thailand 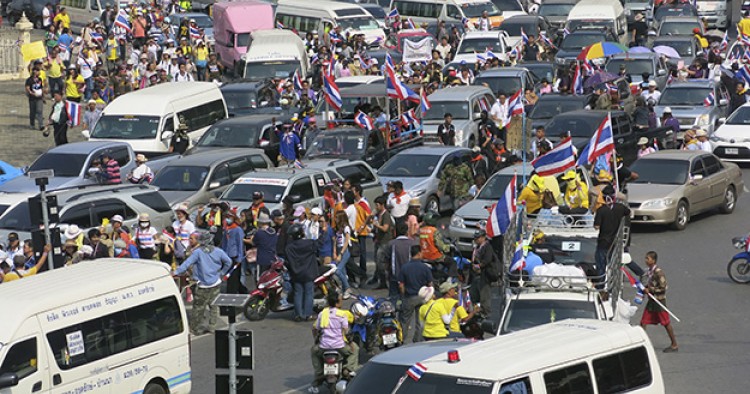 Over 30 military coups and coup attempts have taken place in Thailand since 1932, when absolute monarchy was overthrown, the latest of which was in 2006.[1] Clearly, achieving democratic civilian control over Thai security forces remains a daunting challenge. When we talk about Thai security forces, we are referring to the country’s army, navy, air force, police, and paramilitaries. The army is much larger than the other services, although the police force is also quite sizable. Soldiers and police have tended to obey elected civilian authorities due to partisan connections or simply because the appearance of compliance is convenient. But in actuality the security forces are generally insulated from the sanction of elected governments. This article examines relations between civilian governments and security forces, looking first at how the evolution of security sector power in Thailand has influenced Thai democracy. Second, it analyzes to what extent civilian control has succeeded in reining in the security sector in different issue areas. Finally, it outlines lessons to be learned from the failure to fully achieve security sector reform in Thailand and how to relate such insights to the Middle East.

Initially, Thailand’s absolute monarchy established a permanent standing security force in the late 1800s. By the 1920s, the monarchy and army were monopolizing power together with the latter as a “junior associate.” In 1932, monarchical absolutism ceased and military fascism descended upon Thailand, lasting until 1944. The monarchy and military resumed their previous collaboration in 1957, producing a national security state. Since 1977 (the year of the last military coup against a royal favorite), the monarchy has generally dominated the security forces without opposition.[2]

By 1992 there had only been five years of elected civilian governments in Thai history.[3] But that year brought changes: the Cold War was over, the global move toward democratization had intensified, and in May 1992 security forces repressed a massive pro-democracy demonstration, tainting their image. These factors facilitated elections in 1992, allowed for the enactment of a 1997 people’s constitution, and enabled security sector reforms in 1998. These broad-based reforms, although limited and initiated by the military itself, involved downsizing and streamlining the military and prosecuting allegedly corrupt officers. However, these reform attempts were mostly discontinued after 2001. Meanwhile, though democracy seemed to persist in Thailand after 1992 (with military influence curtailed), the monarch and his advisors stood above politics, exerting tutelage over the country.[4]

In 2001, a populist tycoon named Thaksin Shinawatra became prime minister in a landslide election. Thaksin used patronage and personal connections to carve out a loyalist faction over most of the police and a small bloc within the military, although a coup endorsed by the monarchy overthrew him in 2006. Pro-Thaksin governments were consecutively reelected in 2007 and 2011. By 2013, an uneasy accommodation had been reached between an anti-Thaksin military insulated from a civilian government led by Thaksin’s sister Yingluck Shinawatra, which was supported by the police and pro-Thaksin “Red Shirt” demonstrators.[5] Yet by January 2014, anti-Thaksin elements (allegedly including the military) had pressured Yingluck to dissolve the Lower House and call new elections.[6] Thailand continues to be acrimoniously divided between supporters and opponents of Thaksin. Given the pandemonium, most have looked to the military and the police to restore order.

Civilian control in Thailand is either exerted by the palace or by the elected government. Thailand’s security sector has been exceedingly deferential to the royal family since at least 1977. The ideologies of both the military and police place safeguarding the king above protecting the people.[7] Considering the undemocratic civilian control of monarchs, one can easily say that Thailand today looks to have no challenges to (monarchical) civilian control save for the fact that the current reign looks to be dwindling to a close.

In terms of elected civilian control, Thai history has shown time and again that security forces will not always comply. It is the elected prime minister who often must curry favor with the army commander rather than the other way around. To determine Thailand’s parity in decision-making power between elected civilians and security forces, this study uses a framework for understanding civil-military relations that focuses on the balance of decision-making between soldiers and civilians. As such, civilian control is a relative condition. This civil-military continuum can be analyzed in five areas: external defense, elite recruitment (the extent to which the military controls political leadership), internal security, public policy, and military organization (budgeting and military reshuffles).[8]

While external security has mostly come under the dimension of civilian control, especially regarding the civilian-dominated National Security Council, other areas remain mostly shadowed by the influence of security forces. Regarding elite recruitment, security forces have seen an upturn in their power since the military coup of September 19, 2006. Indeed, in the 2007 constitution, the previously elected Senate was swept aside to be substituted with a half-appointed Senate, within which retired officers from the security forces were granted an approximately ten percent quota of seats. In 2011, the number of such appointed senators grew to 16 out of 150, or 10.6 percent.[9] Most senators selected in 2011 had links to the forces behind the 2006 coup.[10]

Security forces have also sought to influence electoral outcomes and coalition formation. Just before the 2007 and 2011 elections, the military was accused of backing and financially assisting parties opposed to pro-Thaksin parties, with the army commander and defense minister allegedly directing soldiers to support certain parties aligned against Thaksin.[11] Then, on December 2, 2008, following the resignation of the pro-Thaksin prime minister, military elements (including the army commander) met with a Democrat Party leader and an ex-loyalist of Thaksin to assemble a coalition government under Democrat Abhisit Vechachiwa that would exclude the pro-Thaksin Pheu Thai party.[12] Such manipulations represented blatant military interference in civilian political competition.

Thailand’s security forces have furthermore informally influenced the fall of three pro-Thaksin governments. First, in late 2008, the army refused to defend a pro-Thaksin government from advancing anti-Thaksin protestors and then, as protests continued, Army Chief Anupong Paochinda publicly called for the prime minister to either resign or dissolve the Lower House, but he refused to do so.[13] Finally, in December 2013, Army Commander Prayuth Chan-ocha refused to order his troops to protect the pro-Thaksin Yingluck Shinawatra government from anti-Thaksin demonstrators who captured government facilities once again (with only token police resistance). Prayuth announced that the military was neutral in the conflict.[14] Most recently, the armed forces chiefs met with anti-Thaksin demonstration leaders at a forum for political reform in Thailand.[15]

As for internal security, a new military-endorsed Internal Security Act (ISA) took effect in 2008. It revised the structure of the Internal Security Operational Command (ISOC) such that though the prime minister continued as director, members of the military and military-leaning bureaucrats outnumbered civilian members on the ISOC board. Moreover, under this board, four regional branches of ISOC are commanded by military officers who are not accountable to civilians.[16] An earlier “Emergency Decree on Government Administration in States of Emergency,” enacted in 2005, is more draconian than the ISA and gives the military even greater autonomy from legal redress.[17] It is this emergency decree that legitimized the military’s deadly quelling of pro-Thaksin protestors in 2010. Moreover, this repression amounted to a double-standard: the army refused to quash anti-Thaksin demonstrations in 2008 and 2013.

Meanwhile, regarding public policy, security forces continue to maintain autonomy from civilian rule in some areas. The military has refused to go along with government preferences to withdraw completely from a border area that is under dispute with Cambodia or to allow China to lead patrols in parts of the Mekong River bordering Thailand.[18]

Finally, regarding military organization, the defense minister and the prime minister previously had the power to reshuffle high-ranking officers (of the rank of brigadier general and higher), though these repositionings had to be endorsed by the king. But in 2008, a new law was promulgated that requires these appointments to be vetted by a committee whose members include the army commander, navy commander, air force commander, supreme commander, and permanent defense secretary (a military official), as well as the civilian defense minister and (optionally) the civilian deputy defense minister.[19] Since the passage of this law, senior military officials backed by the palace have mostly succeeded in keeping elected civilian governments from influencing reshuffle decisions given that the active-duty military members on the committee outnumber the civilian members.

In Thailand today, the military is staunchly pro-monarchist and generally uncontrolled by elected civilians. Meanwhile, most police tend to side with Thaksin, though they would not dare to openly oppose the monarch. The country lacks any sense of institutionalized, democratic civilian control over security forces, and there are varying levels of military autonomy across most decision-making areas. Decades of domination by a partnership between the monarchy and the military have prevented sufficient security sector reform, impeded movement toward civilianization of the state, and eroded the country’s democratic trajectory. In 2014, Thailand’s deconsolidated democracy once again finds itself in danger of being felled by a military putsch.[20]

Thailand is like Egypt and Pakistan to the extent that strong militaries continue to dominate these countries. Yet the recent military ouster in Egypt against Mohamed Morsi, like the putsch against Thaksin, will most likely taint the military’s image. Thus Egypt’s security forces, if they are to continue exerting enormous influence, must insulate themselves and camouflage their power behind elected, though weak, civilian governments. Currently, this is the preferred model of the Thai and Pakistani militaries to sustain themselves in an age in which nondemocratic rule is unseemly.

[9] Author’s calculations based on data from the Senate of Thailand.