October going on December: Voters are still waiting for results in Afghan elections 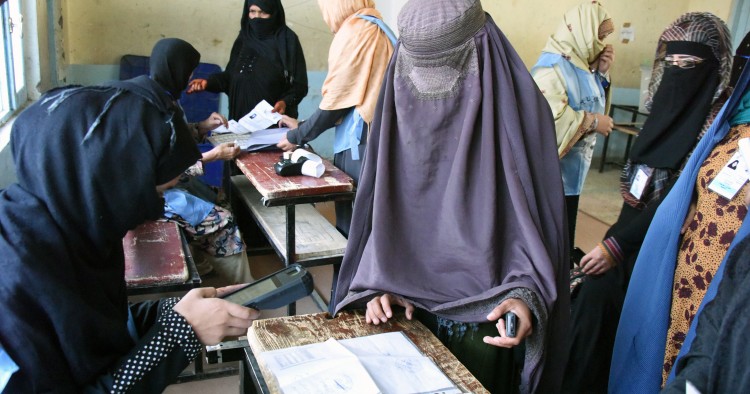 It has been a little less than two months since four million Afghan voters defied threats from the Afghan Taliban and the Islamic State of Khorasan Province to cast their ballots in the parliamentary elections held on Oct. 20, but the Independent Election Commission (IEC) has not yet announced complete results. Clear results that aren’t marred by excessive controversy and criticism have been viewed as essential ahead of next year’s elections, which are vital for both Afghanistan and the international community, especially the United States.

The four important elections scheduled for next April include the presidential vote, provincial council elections for all 34 provinces, and the first elections for councils in 400 districts. In addition, the parliamentary elections for Ghazni Province are also scheduled to take place. At a time when the U.S. is in direct talks with the Taliban, the transparency and trustworthiness of the electoral process is of critical importance.

The October parliamentary elections were held in 33 of the country’s 34 provinces: for 32 provinces the polling was held on Oct. 20, and the southern province of Kandahar went to the polls a few days later after its police chief, General Abdul Raziq, was killed in a terror attack claimed by the Taliban just two days before the vote. The elections could not be held in Ghazni due to disputes over representation between different ethnic groups, primarily Pashtun and non-Pashtun.

The Taliban had warned Afghans not to participate in the elections, which they termed “an American project from start to finish.” But half of the registered voters went ahead and cast their votes anyway. The U.N. Assistance Mission in Afghanistan (UNAMA) said it was “encouraged by the high numbers of Afghans who turned out” and praised the efforts to ensure the elections’ success. Similarly, Gen. Joseph Dunford, chairman of the U.S. Joint Chiefs of Staff, termed the elections “largely successful and less violent ... than people predicted.” At the time of writing, the IEC had announced preliminary results for 21 provinces.

One of the reasons why the IEC has not declared the complete results is fear of a backlash from the losing candidates. Elections are meant to give representation to the people so that they can resolve their inevitable differences through a systematic, well-structured, and fair mechanism. But as happens in many conflict zones, where elections are often viewed as a zero-sum game, Afghan politicians increasingly tend to regard defeat as a loss of access to scarce resources. Since simultaneous declaration of results could have created problems, the IEC has announced them in stages.

Many candidates complained of fraud and irregularities on election day, and not all of these complaints are entirely groundless. Afghanistan’s elections have often been embroiled in controversy in the past. The 2014 presidential elections almost collapsed due to serious allegations of large-scale fraud, until the Obama administration directly negotiated a power-sharing agreement between the two leading candidates. The deal provided for Ashraf Ghani to become president and his main challenger, Abdullah Abdullah, to become the chief executive. Electoral reforms have since been on top of the government’s agenda.

This was Afghanistan’s third parliamentary election since 2004. Over 2,500 candidates competed for 250 seats in the lower house, known as the Wolesi Jirga. Elections were originally scheduled for 2015 but were repeatedly delayed due to the government’s inability to implement key electoral reforms. The first-ever district-level elections were also supposed to be held simultaneously with the parliamentary polls. The aim of these elections is to devolve power to the local level, especially given the government’s fragile hold over the countryside, where the majority of the population follows informal governance structures. The shortage of candidates forced the IEC to delay the district-level elections until April 2019, however. Despite taking some good measures, including preparing voters’ lists and using biometric identification, the IEC-supervised elections could not be deemed completely transparent. Many of the measures aimed at ensuring transparency backfired. In light of the negative experiences in previous elections, political parties insisted on biometric devices for polling to ensure proper verification of registered voters’ identities. However, the ambitious project has proven to be a fiasco.

Despite spending a huge amount on introducing biometric technology, the IEC staff was not sufficiently trained in using it. In fact, the biometric screening failed even for Ghani and Abdullah when they cast their votes, raising serious questions about the system’s ability to identify voters. In addition, many Afghans complained they were not able to cast their ballots due to errors in the voter rolls.

An election complaints agency responsible for dealing with irregularities, the Independent Election Complaints Commission, has also added further confusion by invalidating all votes cast in Kabul Province due to allegations of fraud. This has raised fears that it could lead to another political crisis in the country. The ruling has also set up a stalemate with the IEC, which says it will ignore the decision and certify the results of Kabul’s vote in the coming days. The chairman of the IEC criticized the decision, arguing that it would mean disregarding the wishes of the people.

The challenge of holding elections has been exacerbated by institutional confusion, political instability, and rising violence, which continues to hamper not only the government’s management of a difficult war against the Taliban, but also the forging of a consensus position in peace talks. Several proposals have been made, including holding a national assembly of elders or forming an interim government until a final peace accord is reached with the Taliban. But the Ghani government has ruled out postponing the presidential elections, insisting they will be held on time. However, given the precarious security situation and the lack of adequate electoral reforms, the outcome of the presidential elections is likely to be marred by allegations of bias and unfairness, calling into question the next government’s legitimacy and strengthening the Taliban’s position in peace talks.