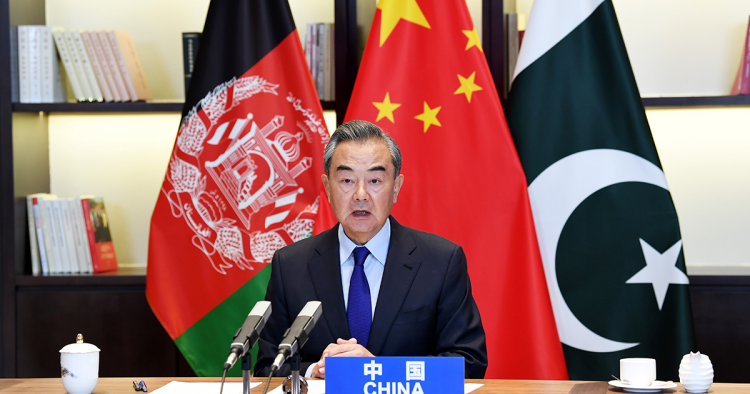 At the Fourth China-Afghanistan-Pakistan Trilateral Foreign Ministers’ Dialogue, held in Guiyang, China on June 3, 2021, Chinese Foreign Minister Wang Yi, Afghan Foreign Minister Mohammad Hanif Atmar, and Pakistani Foreign Minister Shah Mahmood Qureshi discussed various challenges to Afghan peace in the wake of the announcement of the unilateral U.S. military withdrawal. While the challenges from the exit of U.S. troops were identified as the potential for strife and civil war, the opportunities highlighted included the prospects for the Afghan people to decide their own political destiny. Expressing China’s willingness “to work with all stakeholders of Afghanistan, including Pakistan, to make more efforts to promote peace talks and mediation,” Wang offered to play the role of mediator by hosting “an intra-Afghan dialogue at an appropriate time.”1 All three countries also agreed to work together to push the U.S. to ensure an “orderly withdrawal” of its troops as well as “the fulfillment of its due obligations” so that the security situation in Afghanistan does not deteriorate further. The statement went on to add that, “China hopes that Pakistan will continue to make good use of its own advantages and make new and constructive efforts. China also hopes that the Afghan side will take a positive view of Pakistan’s sincerity and contributions.” This suggests that China recognizes the importance of bridging the differences between Afghanistan and Pakistan and sees itself playing a mediator role to this end.

To date, China has largely relied on Pakistan to conduct its Afghan policy. Not much bothered about the future political role of the Taliban, China fears the prospect of instability in Afghanistan after the U.S. exit. Beijing’s primary concern in a post-U.S. Afghanistan, which is likely to be run by a regime dominated by the Taliban, is that Uyghur separatists and the East Turkestan Islamic Movement (ETIM) might find a safe haven in the country. Although all regional countries support the idea of an inclusive political resolution to the Afghan conflict, neither China nor any other country has any appetite to lead a regional intervention to stabilize it. China has therefore responded to the announcement of the American exit from Afghanistan with a sense of disquiet. While it has considered the U.S. presence in Afghanistan to be largely disruptive, the abrupt exit is likely to create more challenges than opportunities for China. Wang had expressed similar concerns at the Third Session of the 13th National People’s Congress in May 2020 when he remarked that American “troop withdrawal must proceed in a responsible way without undermining the interests of Afghanistan or other countries in the region.”2

All external interventions in Afghanistan, whether by Britain, the Soviet Union, or the United States, have been a disaster. In particular, the last four decades since the 1979 Soviet invasion have witnessed a series of traumatic changes in the ways in which Afghans have been governed as they have struggled to cope with the repercussions of the economic, social, and political crises that have engulfed them. As the U.S. leaves Afghanistan after 20 years, the failure to find a political accommodation between warring factions may yet result in another slide into chaos. Building a multi-ethnic state on liberal-democratic lines has been constrained by the inability of the Afghan ruling elite to harmonize the Islamic faith, the country’s mix of ethnicities, nationalism, and modernity. Though many positive changes have taken place in Afghanistan since 2001, such as regular elections; improvements in infrastructure, education, and health care; women’s empowerment; and the creation of a trained national military force, these are not irreversible. The bitter reality is that Afghanistan remains a war-torn country facing an uncertain future, rife with unrestrained terrorist violence, political instability, government corruption, large-scale narcotics production, and an ongoing Taliban insurgency. The security situation is so desperate that the Afghan government has begun to raise local militias.

Afghanistan is neither an entrenched democracy nor a state that has control of its international borders. Moreover, about half of the Afghan countryside remains contested or controlled by the Afghan Taliban and other terror groups such as the Islamic State-Khorasan Province (ISKP), the Afghan-based branch of ISIS. Notwithstanding decades of military operations and international economic and security assistance, Afghanistan remains a source of instability for the region. The inability of the Afghan government to find a political solution with the Taliban is a long-term source of conflict with serious spillover effects. Consequently, the two-decade-long U.S.-led campaign in Afghanistan has progressively evolved into a bloody regional geopolitical contest, giving birth to a “New Great Game.” As withdrawing American troops leave a vacuum to be filled by various terror outfits, Afghanistan may become a regional battleground for the global balance of power.

There seems to be, as could be expected, a convergence of opinion that the hasty withdrawal will have serious repercussions on the process of reconciliation underway. Furthermore, in the midst of the U.S.-China strategic confrontation, the U.S. exit from Afghanistan could have severe consequences for the countries of South and Central Asia in particular. What Marvin Weinbaum remarked 15 years ago still holds true that “many of Afghanistan’s challenges, often thought of as domestic, are also regional in character, necessarily addressed with regional strategies and cooperation.”3 So far, however, the responses to the U.S. withdrawal have not resulted in what can be deemed a truly “regional” political strategy. Against this backdrop, China is refining its policy toolbox to calibrate its response. If the past is any guide, China is likely to rely on Pakistan, at least in the short term, for framing its response to the unfolding Afghan scenario. Though Pakistan has set in motion the process of resetting its relations with the Biden administration, at this stage it will mostly likely throw its weight behind China if Washington and Beijing fail to reconcile their differences on Afghan affairs.

Although it would be simplistic to assume that China’s and Pakistan’s interests in Afghanistan have become completely identical, one cannot rule out a growing convergence that may lead to deeper engagement between Beijing and Islamabad after the American drawdown. This paper seeks to address the Pakistan factor in China’s Afghanistan policy and is divided into the following five sections: