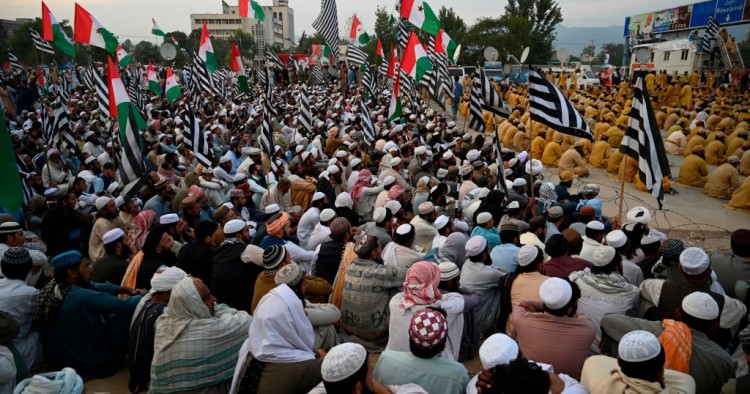 Pakistan’s capital, Islamabad, has been paralyzed in recent days by supporters of Maulana Fazlur Rehman and his Jamiat-Ulema-e-Islam (JUI-F), a well-entrenched Islamist party. The protestors are seeking the resignation of the military-backed Prime Minister Imran Khan and fresh elections, and the demonstration has emerged as an existential problem for Khan.

The current “Azadi march” against the Pakistan Tehreek-e-Insaf (PTI) government is a repeat of what occurred in 2014 when Khan staged a massive demonstration against the government of Nawaz Sharif. While Khan’s show of strength did not achieve any declared objective — although the visit of Chinese President Xi Jinping had to be cancelled, as the capital was in lockdown — it certainly weakened the democratic space in Pakistan. It remains to be seen what Fazlur is going to accomplish by mounting a formidable challenge to Khan’s leadership and legitimacy. Whatever the immediate result though, Fazlur is likely to remain a key stakeholder in the country’s political future.

Having spent more than a year heading the PTI government, Khan has not been able to shed the image of being installed as a “selected” prime minister who behaves like the army’s political spokesperson. All the talk of a harmonious civil-military relationship hides the reality of Khan’s virtual irrelevance in policy-making. Apart from this, Khan does not have anything to show for his first year in office on the governance front, and his administration has rendered the parliament ineffective. His performance in handling Pakistan’s economic crisis has been less than satisfactory, which has understandably stoked public resentment against the government. Moreover, his politics of vendetta, which presents a huge threat to Pakistan’s fledgling democracy, and obsession with targeting opposition leaders have already spilt the country. This has created a vacuum for religious forces such as Fazlur’s to exploit by mobilizing the people, strengthening the hold of unelected groups.

There is no doubt that Fazlur has a personal grudge against Khan; he did not win a single seat in parliament in the 2018 election and suffered a humiliating defeat in both Dera Ismail Khan and Lakki Marwat in Khyber Pakhtunkhwa Province. However, there is speculation that Fazlur is getting covert and indirect support from a section of the Pakistan Army that is said to be dissatisfied with Khan’s decision to grant a three-year service extension to the army chief, Gen. Qamar Javed Bajwa. This move will directly impact the career prospects of around 20 lieutenant generals who will be superannuating in the next three years. Many of them would have been contenders for this post, the most coveted in Pakistan. Thus, one cannot rule out the possibility of Fazlur capitalizing on this opportunity to achieve his own political ambitions. Since his base of support comes from the Deobandi madrassas spread throughout Pakistan, most of the participants in the demonstration are madrassa students, the religiously-minded, and lower-middle classes, who also remain vulnerable to JUI-F’s politics of religious hatred and intolerance.

Despite his stern public posturing, Khan cannot order a crackdown on the demonstrations since he himself indulged in the same extra-constitutional measures currently being employed by Fazlur. Thus, Khan lacks the moral authority to challenge the JUI-F’s resort to undemocratic means and exploitation of religion. Using democracy as a cover, the JUI-F leader has been spreading anti-minority rhetoric by claiming to have foiled conspiracies involving Jews and Ahmadis — a group that is treated as non-Muslim in Pakistan and faces both social and legal discrimination.

What options does Khan have? His preference would be to tire out the crowd by doing nothing at all. Alternatively, his negotiators are already trying to engage with the protestors, which could allow them to save face. Khan has expressed his willingness to accept all of the protestors’ “valid” demands, except for the call for his resignation. The last and riskiest option is to use force to disperse them. Without a credible counter-narrative, forcibly evicting the protesters would mean violence and could lead to unpredictable consequences.

This distraction has come at a bad time for Khan’s beleaguered government. His effort to play mediator between Saudi Arabia and Iran will go nowhere if his government can’t even keep the crowd off the streets of the capital. The Financial Action Task Force (FATF) is breathing down Islamabad’s neck as it seeks prompt and noticeable progress on its 27-point action plan by February 2020. Separately, the IMF is seeking implementation of tough benchmarks, including a substantial tax increase. How would Khan act on these demands in such a charged political atmosphere?

Given former Prime Minister Sharif’s critical health condition, if something were to happen to him, Khan would surely be blamed for denying him proper medical care. Even though the Sharifs are out of power, the Pakistan Muslim League (N) (PML-N) has a sizeable following in the country’s largest province. Given the massive numbers he has mobilized, Fazlur has the initiative, and this has become a cause for concern among leaders in both Islamabad and Rawalpindi. But his call for the restoration of civilian supremacy is a mere facade. Since his major interest lies in reviving the dwindling electoral fortunes of the JUI-F, Fazlur would not hesitate to strike a favorable deal with the ruling establishment.

That is why he has the tacit — but not whole-hearted — endorsement of mainstream political parties like the PML-N and the Pakistan Peoples Party, which have been wary about providing uncritical support to the JUI-F. It remains unclear what kind of behind-the-scenes machinations Fazlur is attempting. Because of this, both political parties fear being extorted by the JUI-F for concessions from the PTI government. They are also trying to avoid a scenario that could allow the army to intervene. Since Fazlur has invested so much political capital in the massive show of strength, he is unlikely to simply end the Azadi march without getting something that he can claim as a victory, while Gen. Bajwa, much like Khan, does not want a confrontation at a moment when he stands to get an extension as army chief.