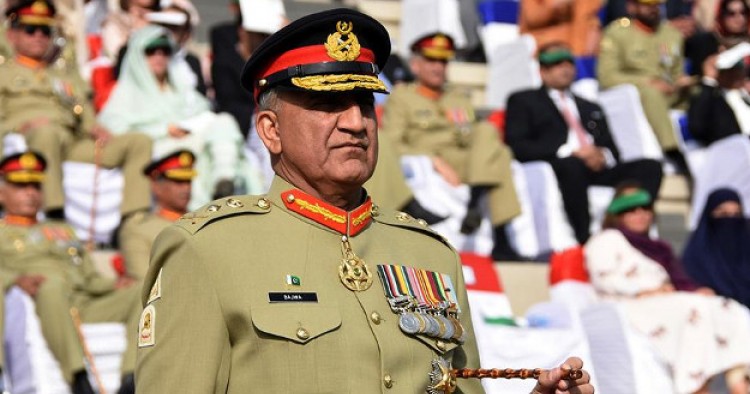 When the chief of the Pakistani Army visited Tehran last week, he told the commander of Iran’s Islamic Revolution Guards Corps (I.R.G.C.) that Pakistan is interested in learning from Iran’s experience of creating the Basij Organization and using “popular forces” to counter enemy threats, according to the Iranian media. “We believe that the most important factor in your success against enemies has been the support for the people and we hope that this trip heralds the beginning of transferring the experience of Basij and the model of using popular forces by Iran to Pakistan,” Lt. Gen. Qamar Javed Bajwa reportedly told Major General Mohammad Ali Jafari in a meeting in Tehran. The Pakistani Army chief also hailed the I.R.G.C.’s support for regional countries. “The Iranian nation today enjoys a good status and prestige despite all threats. The Pakistani nation has also lived under sanctions for years; but the two nations have performed well despite all difficulties,” he added. “Despite all plots and divisive actions by enemies, we seek to expand our partnership and relations.”

Jafari emphasized that Iran is ready to transfer its Basij expertise to Pakistan. “With its 40-year experience in countering enemy threats, the Islamic Republic of Iran is ready to transfer the experience of defense and popular resistance to Pakistan.” Accusing the United States and Israel of undermining regional countries, Jafari added: “We were informed that efforts are also being made to spread insecurity inside Pakistan. Preemptive steps with reliance on popular forces, alongside the armed and security forces, can prevent insecurity in the country.”

Bajwa traveled to Iran in an effort to boost defense ties and border security cooperation between the two countries.

Comment: The Basij Resistance Force is a largely volunteer paramilitary organization operating under the I.R.G.C. leadership. The Islamic Republic’s founder Grand Ayatollah Ruhollah Khomeini established the Basij Force after the 1979 revolution, and the organization played an active role during the Iran-Iraq war in the 1980s. Today, the organization has presence in all Iranian provinces, advancing the regime’s ideological and political agenda. Members of the organization, function as religious activists, aid workers, intelligence agents, moral police, and more. Basijis are well trained in how to quell riots and suppress uprisings. It was instrumental in the bloody suppression of anti-government protests that rocked Iran after the 2009 controversial presidential elections. Its plainclothes agents and moral police regularly harass ordinary Iranians, university students, government workers, journalists, activists and politicians.

Last December, Iran’s Supreme Leader Ali Khamenei appointed Brigadier General Gholamhossein Ghaib-Parvar as the new head of the Basij Force, and tasked him to counter “enemy infiltration” and “soft” threats against the regime.

In recent years, the Basij Force has also actively recruited “volunteers” inside Iran to fight in Syria. The I.R.G.C. has also emulated the success of the Basij to mobilize Afghan, Pakistani, Iraqi and Lebanese Shiites to fight for Iran’s interests in the Arab world. Last year, I.R.G.C.’s elite Quds Force commander, Qassem Suleimani, bragged that Basij forces had been instrumental in exporting Iranian revolution across the region. “Islamic movements such as Hezbollah of Lebanon and Palestinian Hamas received inspiration and spiritual aid from Basij. This is why Iran’s flag would fly in those countries.”

The I.R.G.C. also provides training to several countries in Latin America in how to create and utilize the Iranian model of paramilitary Basij Force. “A team from Latin America came to our country to receive training in how to establish the Basij,” said Brigadier General Mohammad Reza Naqdi, the head of IRGC’s cultural and social affairs, on January 9. He added that the trainees “gravitated toward Islam and were commending Iran’s resistance and achievements.” In the past, Naqdi had reportedly helped Venezuela’s Ministries of Defense and Interior in training their notorious civilian militias, known as the colectivos’.

Despite I.R.G.C. leaders’ denial, the Basij Force also interfere in politics. The role of the Basij Force in politics increased significantly under the Mahmoud Ahmadinejad government. Basij members reportedly played a decisive role in Ahmadinejad’s reelection in 2009, by establishing campaign offices in major cities, holding rallies in the incumbent’s favor, and intimidating opposition supporters.