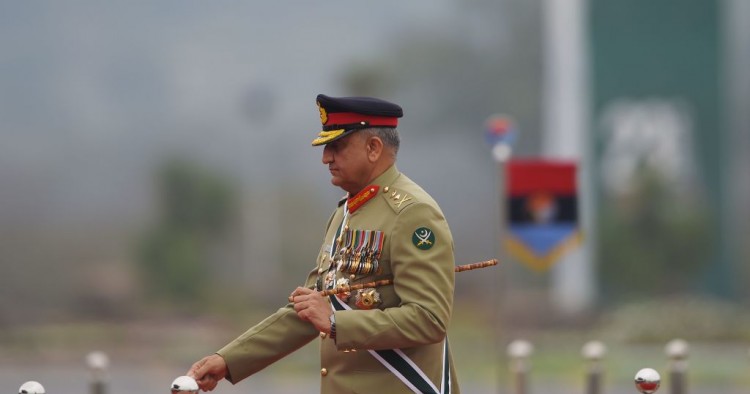 Understanding a state and its society involves understanding how the state treats its military, its record of governance, and the relationship between the military and civilian politicians. By all accounts, Pakistan, a state founded in 1947 as a homeland for the Muslim population of British India, is a unique case where the military dominates all other institutions in both state and society. This was on clear display in the recent court battle over the extension of Army Chief of Staff Gen. Qamar Javed Bajwa’s tenure.

While the dramatic manner in which Pakistan’s Supreme Court granted a six-month conditional extension to Gen. Bajwa on the last day of his term, Nov. 28, may have averted an immediate crisis, the whole episode has exposed the huge imbalance in civil-military relations in the country. During his time in role since 2016, Bajwa has reclaimed almost all of the ground that the military had given up during the last decade of uninterrupted civilian rule, and the balance of power has become decisively tilted in favor of the military.

A series of errors

Prime Minister Imran Khan’s complete disregard for constitutional procedure was clear from the day the initial notification about Bajwa’s extension was issued in August, just two weeks after Delhi abrogated Article 370 of the Indian Constitution regarding Kashmir. The Pakistani government had cited the “regional security environment” as the major reason for its decision to extend Bajwa’s service. When the move was challenged in the Supreme Court, it was revealed that the government had made many procedural errors and had not even followed the proper legal process in issuing more than one notification. Since the initial notification could not withstand judicial scrutiny as it did not have proper approval of all the key stakeholders — the cabinet, prime minister, and president — the government was forced to issue a second notification with the requisite approvals. But even that was not sufficient.

The government could not even clarify whether it was an “extension” or a “re-appointment.” When the Supreme Court raised pointed questions about the constitutionality of the move, the Khan government stated that the general’s term was being extended according to Army Regulation 255. The Supreme Court rejected this argument, noting that the stated regulation does not apply to the Army chief, and forced the government to concede that Bajwa’s reappointment by the Pakistani president was in accordance with Article 243 of the Constitution. The Supreme Court therefore granted Bajwa a conditional extension for six months, asking the Khan government to have parliament pass appropriate legislation to avoid legal ambiguities in future. To add insult to injury, the Supreme Court observed that it was “labeled as agents of India and the US Central Intelligence Agency (CIA) when we examined the Army Act yesterday.”

The “Bajwa doctrine” and civil-military relations

This episode has made clear that the civilian government has no option but to bend to Bajwa’s wishes. A largely supplicant media has consistently presented Bajwa as a pro-democracy general who is a moderate on many political issues and maintains good relations with the civilian leadership. The so-called “Bajwa doctrine” has also been a matter of much public discussion. While his supporters deem it a bold vision signaling the abandonment of the notion “of strategic depth and Afghanistan as the fifth province of Pakistan,” his critics contend it merely reflects the status quo and provides a veneer for indirect military rule by giving intellectual respectability to the Pakistani military’s “entrenched notion of institutional supremacy.” When this so-called doctrine began to receive negative publicity, however, the Army clarified that it was just a security concept and had no links to either political or constitutional issues.

If he gets a full three-year extension, which seems a mere formality at this point given the nature of civil-military relations in Pakistan and Bajwa’s determination to remain in role, it will effectively squander all of the democratic gains that Pakistan has made since the removal of military dictator Gen. Pervez Musharraf in 2008. The military’s efforts to gain an upper hand had already begun during the tenure of Gen. Raheel Sharif, Bajwa’s predecessor, when it tried to topple Nawaz Sharif’s civilian government by orchestrating demonstrations by Islamist proxies. But Gen. Raheel preferred to retire on time. After Bajwa came to power, the military eventually got rid of Prime Minister Sharif through judicial maneuvering. This is not the first time the judiciary has played such a role either: In 1979, during the military dictatorship of Gen. Zia ul-Haq, former Prime Minister Zulfikar Ali Bhutto was hanged under the guise of a judicial process.

The appointment, or rather “selection,” of Khan as prime minister reinforces this view — that the military establishment has supported him to eliminate the two main political parties that have alternately ruled Pakistan for most of the last three decades. The manner in which Khan has been running the government marks a low point for civilian rule in Pakistan, and ambitious generals now have a template for how to pull the strings from behind the façade of an elected government without removing it through a coup d’état.

Instead of gracefully resigning after the Supreme Court raised questions and allowing the government to choose his successor, Bajwa has remained determined to continue as Army chief. The military remains the most powerful institution in Pakistan and its chief enjoys an unparalleled position in the country. The seeds of this problem were sown in the early years after Pakistan’s creation, and following its intervention in 1958, the military has often dominated the country, carrying out subsequent interventions in 1969, 1977, and 1999.

So powerful is Bajwa that Law and Justice Minister Farogh Naseem resigned from the cabinet just to represent him in the Supreme Court. After the verdict, Naseem once again took the oath to assume the role of minister. Surprisingly, Bajwa was also part of the discussions in the prime minister’s house, where his case was being discussed and the government’s response to the judiciary was being decided, leading the Supreme Court to lament that “it is embarrassing that the Army chief has to keep an eye on summaries instead of the country’s defense.” It was shocking that not a single minister questioned whether it was appropriate for Bajwa to be present in the meeting.

The military and policy-making

Bajwa’s behavior once again confirms the Pakistani military’s underlying assumption that it is an independent stakeholder that is uniquely entitled to remain free of civilian control, including that of Parliament, and that its views must be respected in policy-making, particularly foreign and security policy. In these two domains it is the military that has always called the shots, and Bajwa is no exception in this regard. His overbearing role in foreign affairs has been on full display. Preferring defense diplomacy, Bajwa has made frequent trips to Saudi Arabia, Iran, the United Arab Emirates, Qatar, China, and Afghanistan, among other countries. He has also accompanied Khan on many state visits. However, the Khan government’s incompetence and irresponsibility have also allowed Bajwa to play a role in domestic politics that exceeds the military’s normal remit. Nobody has forgotten his high-level meeting with influential Pakistani businessmen in October, when he reportedly told them that the country’s improved internal security environment had created favorable conditions for economic activity.

Pakistan has many competent generals to replace Gen. Bajwa, but the government’s extraordinary support to extend his tenure is a testament to the fact that Khan feels protected under Bajwa’s shadow. A three-year extension would mean that around 20 of Bajwa’s juniors would retire. The Supreme Court caustically remarked, “If they [the government] find an extraordinary general tomorrow, will they grant him an extension of 30 years?” There are unconfirmed media reports that a few generals, backed by the chief justice, were behind the move to embarrass the Khan government and frustrate Khan and Bajwa’s maneuverings. Although the judiciary-military tension is not likely to last as the chief justice is retiring on Dec. 20, it has forced the country to revisit a practice that was taken for granted.

Khan’s apologists often claim that the military and the government are on “one page.” There is nothing wrong with that, but making a virtue out of elected representatives being in consensus with their non-elected subordinates should not be a policy imperative. In a country like Pakistan that requires the shock therapy of multiple structural reforms in its economy, foreign relations, and domestic institutional make-up to grapple with its numerous ethnic, religious, security, and governance challenges, the continued dominance of the military will only exacerbate problems.

In this distasteful political drama, the Supreme Court has emerged as the only institution that has acted correctly when it asked the government to enact, within six months, proper legislation governing an extension in the tenure of the Army chief. Khan may have wanted to ensure a smooth extension of Bajwa’s tenure without any controversy so that the military leadership, which is confident of his deference to its entrenched institutional interests, would continue to shield him. Although the ball is in Parliament’s court now, the odds of elected politicians asserting the legislature’s supremacy are slim indeed.