Palestinian Refugees from Iraq in Critical Need of Protection 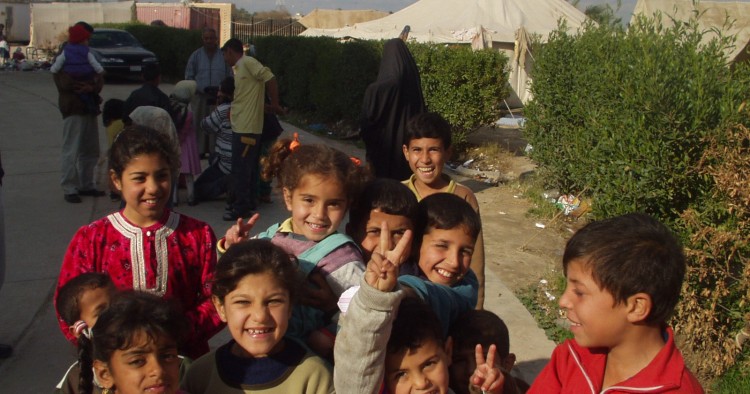 “The twice-displaced Palestinian refugees are one of the worst-off groups in a country full of desperate people. … They have no country to go to, no valid travel documents, no protectors inside Iraq, and hardly anyone prepared to support them outside either. … It is to everyone’s dishonor that these human beings are still rotting [in border camps] and — worst of all — in Baghdad where one or more is being murdered virtually every day.”1

Since the 2003 invasion and occupation of Iraq, the Palestinian refugee community in Iraq has become increasing vulnerable and targeted by a variety of groups, including Iraqi security forces.2 Palestinians have been forcibly evicted, arbitrarily arrested, abusively detained, publicly slandered, kidnapped, tortured, and killed.3 Many thus have been forced to flee this targeted persecution in search of asylum.

Of the estimated 34,000 Palestinian refugees living in Baghdad before 2003, today there are only 9,000 registered with the UN High Commissioner for Refugees (UNHCR).4 Over 3,000 are living in desert camps near the Syrian border. Several thousand more have dispersed throughout the world in search of protection and are concentrated in places like New Delhi, Cyprus, and Malaysia.

With a few notable exceptions, the international community has largely failed to respond to the grave protection needs of these people. Traditional resettlement countries, including the United States, need to urgently consider admitting these refugees through their programs, designed and developed to save lives and respond to humanitarian needs.

Palestinian refugees, the world’s largest and longest standing refugee population, came to Iraq in three waves — 1948, 1967, and 1991 — after being uprooted by three different wars. The majority of Palestinians in Iraq are 1948 refugees who originate from villages near Haifa and the Galilee.5 They continue to have strong ties with their relatives in the West Bank and inside Israel. Iraq is not a signatory to the 1951 UN Convention Relating to the Status of Refugees, nor does the UN Relief and Work Agency (UNRWA) have a mandate to operate there. Under the former Iraqi government, Palestinians were provided protection under resolutions by the League of Arab States and by the 1965 Protocol for the Treatment of Palestinians in Arab States, otherwise known as the Casablanca Protocol. Palestinians were permitted to work, attend educational institutions, and enjoyed freedom of movement; however, they could not own property or acquire citizenship.

Despite their long-term residence in Iraq and their status as refugees, Palestinians have been afforded little protection in the aftermath of the US-led invasion. Without security of residence, Palestinians continue to be subjected to repeated expulsion and dispossession. Palestinian refugee families have suffered multiple displacements due to the lack of access to a nationality or citizenship.6 Almost every decade since 1948 has brought a mass expulsion of Palestinians from one state or another — and this decade has been no different.

Given the hostile conditions facing this group, many Palestinians sought safety in neighboring countries. Despite their vulnerability and great need, and unlike hundreds of thousands of other refugees from Iraq, Palestinians attempting to seek asylum largely have been denied entry, especially to urban centers. Jordan refused to allow Palestinians to enter its territory, except for a limited number of approximately 400 who were married to Jordanian nationals. Over 150 others were confined to Ruwayshid camp, administered by the UNHCR, approximately 50 kilometers from the Iraq border.7 After more than four years of confinement in this dusty and scorpion-infested camp, without freedom of movement and completely dependent upon aid, the majority of Palestinians were offered third country resettlement by Canada, New Zealand, and Brazil. The United States accepted eight cases. Those not resettled were transferred to al-Hul, a border camp in Syria. Still, the protection space in Jordan for Palestinians remains closed.

Three additional camps near the Syrian-Iraqi borders also house Palestinians from Iraq who have been denied entry into Syria. As of July 2008, al-Hul camp, located in al-Hassakah Governorate in northeast Syria, has 296 Palestinian residents. Al-Walid camp is inside Iraq near the Syrian border and hosts 2,000 Palestinians. The unbearable conditions include extreme temperatures, the presence of snakes and scorpions, and serious protection issues including the reported presence of armed non-residents entering the camp. One aid worker who has visited the camp described it as “hell.”8 Al-Tanf camp, located beside the main transit road and in the no-man’s land between the Iraqi and Syrian checkpoints, has 726 Palestinian refugees. Refugees live in tents and water, food, and fuel must be trucked into the camp. Despite these extreme and dangerous conditions, the population of al-Tanf continues to increase. Some 500 Palestinians who entered Syria clandestinely with forged Iraqi passports have been picked up by Syrian authorities and deported to the camp. An estimated 3,000 Palestinians from Iraq continue to reside in Syria, many of whom have been welcomed into the existing Palestinian refugee communities.

Chile and Sweden recently sent missions to al-Tanf and will resettle approximately 100 and 150 refugees respectively. Iceland sent a mission to al-Walid, and is expected to resettle around 30 Palestinians. At the recent June 30-July 2, 2008 Annual Tripartite Consultations on Resettlement in Geneva, Sweden and Iceland both emphasized the strong protection needs of these refugees.9

Approximately six months ago, the government of Sudan, members of the Palestinian Authority, and UNHCR signed a tripartite agreement to relocate refugees from Al-Waleed camp. The agreement offers refugees, on a voluntary basis, the opportunity to be relocated to Khartoum. Only those refugees able to become self-sufficient would be considered. Pre-fabricated housing would be made available. These refugees would be entitled to two years of UNHCR oversight, after which they would receive no assistance. Refugees would be given a residency permit but not citizenship or a passport. Since Palestinians will not enjoy security of residence, they may once again be subjected to expulsion and dispossession. In this sense, the solution is far from durable.

UNHCR has consistently appealed to refugee resettlement countries to respond to the dire needs of the families trapped in these inhumane conditions.10 US-based non-governmental organizations also have highlighted this need.11 Still, many more resettlement countries, including the United States, need to urgently prioritize the examination of these cases for admission until the Palestinian refugee issue writ large is addressed within the framework of UN resolutions and international law as part of a durable, long-term solution to the elusive peace in the Middle East.

5 Badil, “Searching for Solutions for Palestinian Refugees Stuck in and Fleeing Iraq,” Al-Majdal, No. 33 (2007).