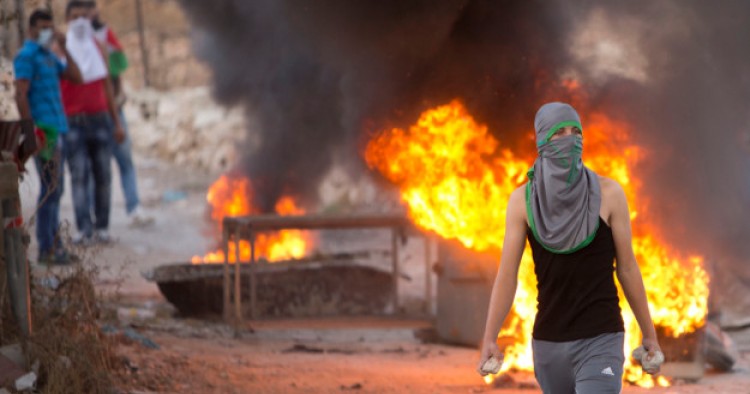 On a scale not seen since April 2002, Israel is instituting dramatic increases in the deployment of its military and police forces throughout Israel, East Jerusalem and the West Bank proper. These moves by the government of Prime Minister Benjamin Netanyahu comprise the initial security response to limited but escalating Palestinian attacks against Israeli civilians, settlers, and military forces throughout Israel and the occupied West Bank. The cycle of action and response is putting the PA’s Security Forces in an unsustainable position that threatens to unravel one of the central bargains of the post-Oslo arrangements.

The deployment of Israeli civil police and militarized border police, the use of reservists, and the doubling of regular military forces in the West Bank and along the border with the Gaza Strip, however significant, may represent only the first phase in an effort to crush the explosion of random attacks that distinguish the current wave of Palestinian opposition to Israel's occupation and settlement policies. Opposition leader Isaac Herzog has called for the complete "closure" of the West Bank - a drastic move not seen since the darkest days of the second intifada more than a decade ago. Former foreign minister Avigdor Lieberman wants Israel to restore direct military rule over parts of the West Bank -- effectively dismantling the Palestinian Authority -- and in Arab communities in Israel itself.

In stark contrast to these unprecedented military options for containing Palestinian unrest, the police and security forces of the Palestinian Authority are all but absent from the fires burning throughout the occupied territories -- not only from the streets of the West Bank but also from the calculations of policymakers on both sides of the divide.

Palestinian Authority chairman Mahmoud Abbas himself has been warning for years that he will "throw away the keys" and end security cooperation between his fledgling forces and the Israeli military and security services. These threats formed the heart of the "bombshell" that he hinted would be announced during the recent meeting of the UNGA in New York in September.   In the end there was no bombshell.[1]  But it turns out that those concerned about the sustainability and performance of Palestinian security forces should have been looking elsewhere.

Abu Mazen may make threats to dismantle the PA, but if the PA is to collapse, the place to look is the beleaguered Palestinian security forces (PSF).  When they are faced with the terrible choice between suppressing popular opposition to occupation of the kind now roiling the West Bank and Jerusalem and protecting their people against Israeli military and settler depredations, they may simply melt away, or even join the fight as they did during the second intifada.

As the events of the last weeks make clear, if the PSF simply cease to function --as is now increasingly the case -- this will not be as a result of a declaration by Mahmoud Abbas, but rather the unplanned and undesired dissolution of a key PA institution whose mission and political raison d'etre have simply become irrelevant.

No one with any understanding of the relationship between Israel and the PA has ever taken seriously the prospect of a Palestinian policy decision to end security cooperation with Israel. Asked recently about operational plans to address the impact of such a move, a senior western security official told me that he was not even considering it.

The security bargain is the end all and be all of Israel's interest in establishing and maintaining the PA. The Oslo II map excluded almost 60 per cent of the West Bank (Area C) and all of East Jerusalem from the PA's security remit. The remaining 40 per cent of the territory offered the PSF some measure of security autonomy (Areas A and B).

But when Yassir Arafat ‘failed’, in Israel’s eyes, to suppress the second intifada, Israel destroyed his security forces and forever ended the experiment of placing parts of the West Bank off limits to the Israel Defense Forces (IDF).

The current PSF complement --- numbering around 25,000 in the West Bank -- was born out of the destruction in 2002 of the old order created by the Oslo accords in 1995. By 2007, under US and European leadership, the recreation of new security and police forces were trumpeted as the key to restoring trust and cooperation between Israel and the PA. A rebuilt and restructured Palestinian security institution, trained and equipped by US and European advisors, would, US officials claimed, create a new working foundation for political progress -- the much-desired "political horizon" at the heart of US peacemaking efforts -- and would empower the PA's security forces to "claim more space" in the West Bank in cooperation with Israel.

Indeed, the train and equip mission for the PSF, unlike other American-led efforts in Syria and Iraq, has been an unquestioned operational success. IDF officials recognize the sustained ability of the PSF to provide law and order on the streets of Palestine, and to insulate the PA from challenges by Hamas.

But since April 2002 the IDF has been everywhere in the West Bank, undercutting one of the central pillars of the Oslo understandings and obstructing Palestinian security institutions’ ability to protect their own space and their populations from security threats from settlers and the IDF.

As the territorial footprint of the settlement enterprise has expanded over the years -- settlers now number more than 500,000 -- so too have the incidents of violent settler confrontations with Palestinians. The UN agency OCHA has recorded almost 200 individual acts of settler-related violence against Palestinians and their property during 2015. OCHA also reports that Israel's military search and arrest operations in the West Bank numbered 110 during the first week of October, higher than the 2015 weekly average of 78 -- representing ongoing intrusions by the IDF numbering more than 10 per day.[2]

The increasing frequency of these acts has sparked the creation of local Palestinian village self-defense units to try to do what their security forces cannot. The upcoming olive picking season can be expected to be particularly tense this year.

The PSF are explicitly prohibited from addressing these confrontations at the heart of Palestinian concerns. When the IDF moves, the PSF "go to the museum" in the words of one Palestinian -- staying off the streets and letting Israel get on with its unilaterally defined mission. These days, when the IDF confronts Palestinian demonstrators in the streets of Bethlehem, Ramallah or El Bireh, at checkpoints near Huwarra and elsewhere, and certainly anywhere in Jerusalem, PA forces are conspicuous by their absence.

Faced with the everyday reality of their inability to secure their own people against Israeli settlement and security designs, and Israeli demands to enforce law and order, the PSF are caught in a policy and political trap. The American architect of Palestine’s train and equip mission General Keith Dayton, acknowledged years ago that without the kind of political horizon that is now absent, the shelf life of the PSF has limits. If measured by Dayton’s assessment, the PSF are already well beyond their sell-by date.[3]

The eruption of the West Bank in these last weeks has demonstrated  the critical limitations of the "space for security" bargain at the heart of the train and equip concept. There is no political end game on the horizon, and Israel remains adamant about not surrendering its freedom of action anywhere in the West Bank no matter how well the PSF perform their duties.

In the absence of any discernable movement in the direction of liberation from Israeli rule and the creation of a Palestinian state, the PSF are increasingly seen not only by the public but, increasingly by the forces themselves, as "collaborators and agents"[4] of permanent occupation.

The environment today is characterized by escalating Israeli military action and a widespread view among Palestinian security and political officials that there is no political or security ‘payoff’ for intervention. "The status quo that has prevailed since 2007, rooted in close coordination between the Israeli and PA security hierarchies, is coming to an end," wrote veteran West Bank correspondent Avi Issacaroff recently.[5]

The failure of security cooperation puts the entire political and institutional system built since 1993 in jeopardy.  This system has proven more resilient than most observers and indeed its architects themselves could have imagined. But there can be no doubt that security cooperation, and with it a shared Israeli and Palestinian interest in the survival of the PA, is living on borrowed time.